Popular Science
Issue: May, 1945
Posted in: Architecture
4 Comments on Would you Live in a Stainless-Steel Igloo? (May, 1945) 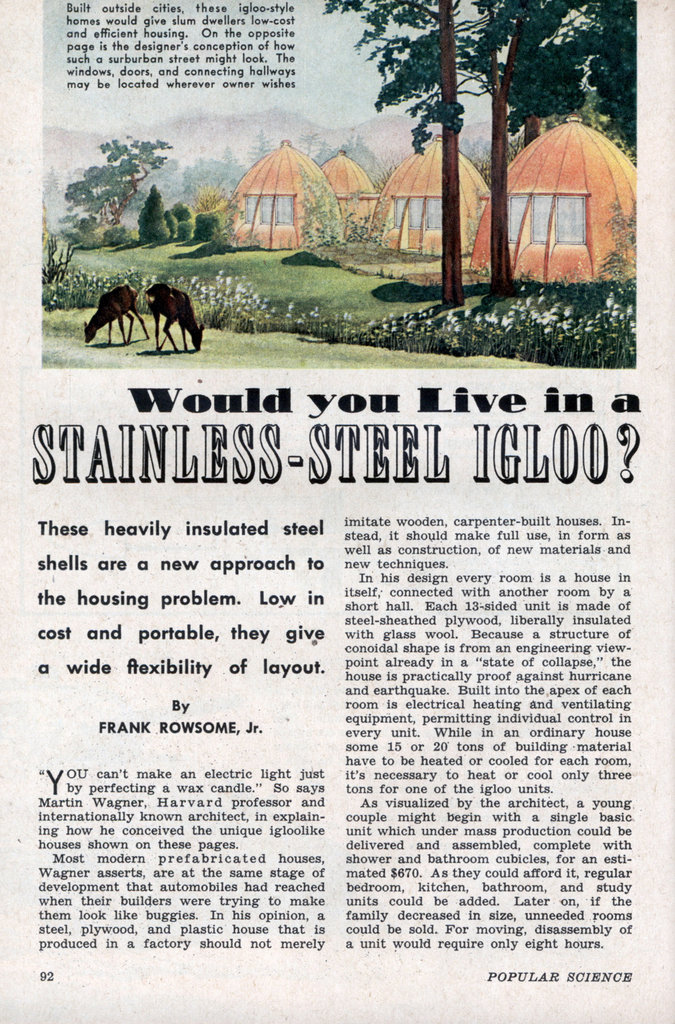 Would you Live in a Stainless-Steel Igloo?

These heavily insulated steel shells are a new approach to the housing problem. Low in cost and portable, they give a wide flexibility of layout.

YOU can’t make an electric light just by perfecting a wax candle.” So says Martin Wagner, Harvard professor and internationally known architect, in explaining how he conceived the unique igloolike houses shown on these pages.

Most modern prefabricated houses, Wagner asserts, are at the same stage of development that automobiles had reached when their builders were trying to make them look like buggies. In his opinion, a steel, plywood, and plastic house that is produced in a factory should not merely imitate wooden, carpenter-built houses. Instead, it should make full use, in form as well as construction, of new materials and new techniques.

In his design every room is a house in itself, connected with another room by a short hall. Each 13-sided unit is made of steel-sheathed plywood, liberally insulated with glass wool. Because a structure of conoidal shape is from an engineering viewpoint already in a “state of collapse,” the house is practically proof against hurricane and earthquake. Built into the apex of each room is electrical heating and ventilating equipment, permitting individual control in every unit. While in an ordinary house some 15 or 20 tons of building material have to be heated or cooled for each room, it’s necessary to heat or cool only three tons for one of the igloo units.

As visualized by the architect, a young couple might begin with a single basic unit which under mass production could be delivered and assembled, complete with shower and bathroom cubicles, for an estimated $670. As they could afford it, regular bedroom, kitchen, bathroom, and study units could be added. Later on, if the family decreased in size, unneeded rooms could be sold. For moving, disassembly of a unit would require only eight hours.