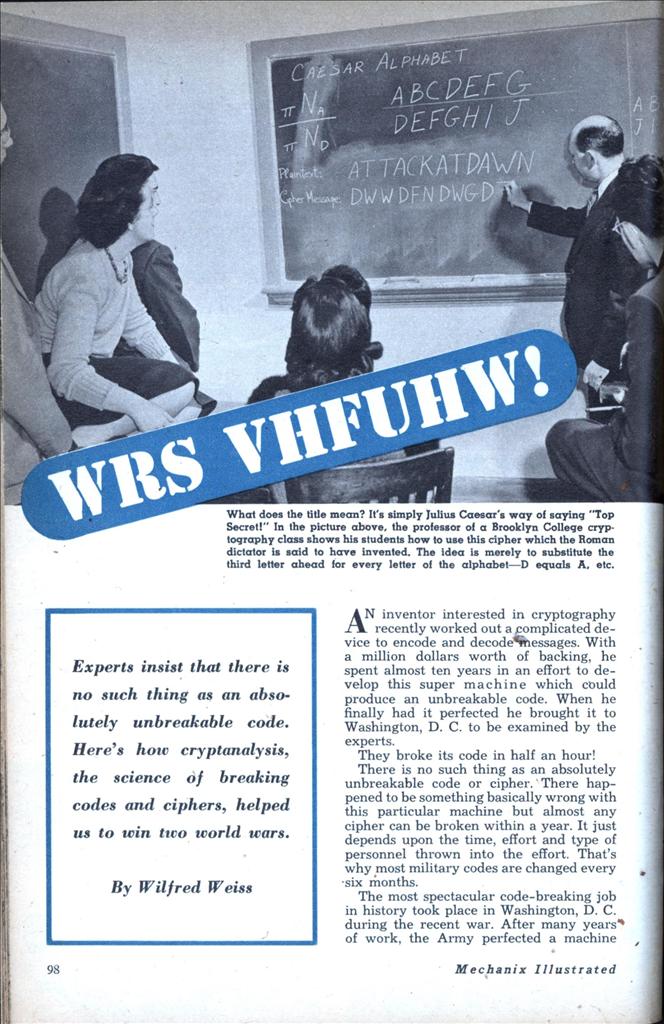 Experts insist that there is no such thing as an absolutely unbreakable code. Here’s how cryptanalysis, the science of breaking codes and ciphers, helped us to win two world wars.

AN inventor interested in cryptography recently worked out a complicated device to encode and decode messages. With a million dollars worth of backing, he spent almost ten years in an effort to develop this super machine which could produce an unbreakable code. When he finally had it perfected he brought it to Washington, D. C. to be examined by the experts.

They broke its code in half an hour!

There is no such thing as an absolutely unbreakable code or cipher. There happened to be something basically wrong with this particular machine but almost any cipher can be broken within a year. It just depends upon the time, effort and type of personnel thrown into the effort. That’s why most military codes are changed every six months.

The most spectacular code-breaking job in history took place in Washington, D. C. during the recent war. After many years’ of work, the Army perfected a machine which could duplicate Japanese coding devices. It was called Magic and it accomplished marvelous jobs for us.

Magic actually warned us of Pearl Harbor (but the information was snafued and did us no good) and gave us information on German action through reports from the Japanese Berlin ambassador. It enabled us to win the battle of the Coral Sea and directed us to convoys in the Pacific. It’s even rumored that Yamamoto’s plane was shot down at Bougainville in 1943 with the help of information decoded by Magic.

How was it done? Who did it? Nobody, outside of an exclusive little circle, knows. Thomas Dewey found out about it during the 1944 presidential campaign and was all set to make a speech revealing that we had actually been forewarned about Pearl Harbor when General Marshall got wind of the speech. He wrote to Dewey asking him not to reveal anything he knew in the interests of national defense as publicity would put an end to our use of Magic. And Dewey complied.

Cryptanalysis or the solving of codes and ciphers, is gradually being recognized as an intricate science, essential to efficient warfare. In the first World War, the job was assigned to a few top mathematicians but in the last war the Army expanded the operation tremendously. And it paid off— witness Magic.

Must you be a genius to be a cryptanalyst? Well, not quite. But an expert code breaker must certainly be of superior intellect and must have a great deal of specialized knowledge. However, he must also have an extraordinarily deductive mind. For instance, in trying to break a message he has to take into consideration the time the message was sent, its origin, its destination and the political and military news of that period. All these, as well as his technical knowledge and high I. Q., help him piece out the message.

An efficient cryptanalyst also has to break messages within as short a time as possible if he’s working under wartime conditions because in battle, action is taken rapidly. And old decoded messages can often mean heartbreak because of what they could have prevented.

Sometimes, breaking a code is the result of pure luck—the story of “lightning gibberish” in the first World War is a good case in point. The German radio station at Nauen started broadcasting high-pitched screeches and the Allied cryptographers couldn’t make any sense out of the noises at all. They recorded them and studied the sounds but nothing seemed to work.

Then, one day some British officers got bored with their old jazz records and put a recording of the gibberish on their portable phonograph. It was the wind-up type and soon it ran down. As it slowed up, the strange sounds began to make sense and suddenly they turned into audible code groups. The Germans had simply sped up the voice five or six times!

At other times, breaking a code is the result of having tried every conceivable possibility. Another Nauen episode during the first World War illustrates this. The German transmitter started sending five digit groups of numbers which the Allies couldn’t figure out. They used all their regular methods—order – of – frequency charts, special cipher boards and even random selection of indicators. But nothing seemed to work.

Then, a cryptographer tried a simple method. He took the first three numbers as a page number and the last two numbers as the line from the top of the page. Then, he tried this method on various standard books. Believe it or not, it worked with an English-French dictionary and from then on that particular German code was a snap.

Sometimes, when it’s essential to get a message out rapidly, a very simple code will be used in the hope “that its very simplicity will fool the enemy. During World War I, British cryptographers almost allowed this message to slip through unnoticed: President’s’ embargo ruling should have immediate notice. Grave situation affecting international law. Statement foreshadows ruin of many neutrals. Yellow journals unifying national excitement immensely.

Take the first letter of each word and you’ll understand why it would have been a disastrous error.

At the first sign of danger in time of war, it is standard procedure to destroy code books. The books are usually bound in lead covers and it’s considered safest to sink them in deep water.

A classic story concerns the German warship Magdeberg during World War I. Chased by part of the Russian fleet, she ran aground and was left like a duck on a rock. The German officer assigned to destroy the code book was making for a small boat which would carry him to deep water where he could drop the book according to instructions. Suddenly, a shell blew him overboard. * ‘ After the ship was destroyed, the Russian commanding officer ordered that the bodies of all Germans be rounded up for burial ashore. One of the first Germans brought in was the code officer—still tightly clutching the code book.

The Russians turned over the code book to the British who were able to use it to cut down U-boat victories. It was one of the turning points of the war.

Some cryptographic circles suspect that there was a similar case in World War II in 1944 when our escort carrier Guadalcanal managed to capture intact the German U-Boat U-505. There are rumors that certain invaluable code books and devices fell into our hands- which made prosecution of the war from then on a trifle easier. However, that is pure speculation.

One thing we can be certain of, though— our armed forces and our state department have recognized the importance of the crypt-analyst and are doing their utmost to see that the top talent in this field is working for us.

There’s a professional proverb in the field which has gained wide circulation—you can break any code as long as you know more about codes than the originator. And as long as we have experts like the fellow who, with no knowledge of hieroglyphics, broke the Rosetta stone mystery in eight hours whereas it took 25 years for scholars to do it, we can be sure we’ve got the best.

Concealed in each of the following sentences is a name. The order of the letters spelling each name has not been changed and there are no intervening letters. If you can do this correctly in less than five minutes you may be of cryptanalytic caliber.

1. A MAN’S NAME. As the party meant much to me socially, I kept thinking: Will I amuse my guests more by making them play bridge or charades?

2. A GIRL’S NAME. All Saturday afternoon she made linen pillowslips.

3. A FLOWER. While waiting in the garden I attempted to compose myself, for I was nervous and ill at ease.

4. A COUNTRY. A pelican, a dachshund, and a chimpanzee became fast friends.

5. A CITY. The priest pointed out to me that nearly all the parishioners would contribute to the cause.

6. A FRUIT. When he accused me, neither fear, nor anger, nor pride caused me to betray myself.

7. A FLAVOR. Ivan the Terrible! Ivan, ill and dying, was still the terrible.

8. A VEGETABLE. A cricket on the hearth heard a wasp in a chimney.

9. AN ANIMAL. One remained in the frying pan, the rest jumped into the fire.

10. A COLOR. Although the bull’s-eye was large and the target near, only a few hit even the outer circle with their arrows.