It’s funny how sometimes people have all the information they need but they don’t put it together. This article talks about X-Raying people’s heads to immunize them against getting a cold, then about how X-Rays increase the rate of mutation by 150 times in experiments. In hindsight it seems obvious to ask if irradiating your head with a mutating beam of energy is a good idea. Though I guess that’s better than using X-Rays to shave. 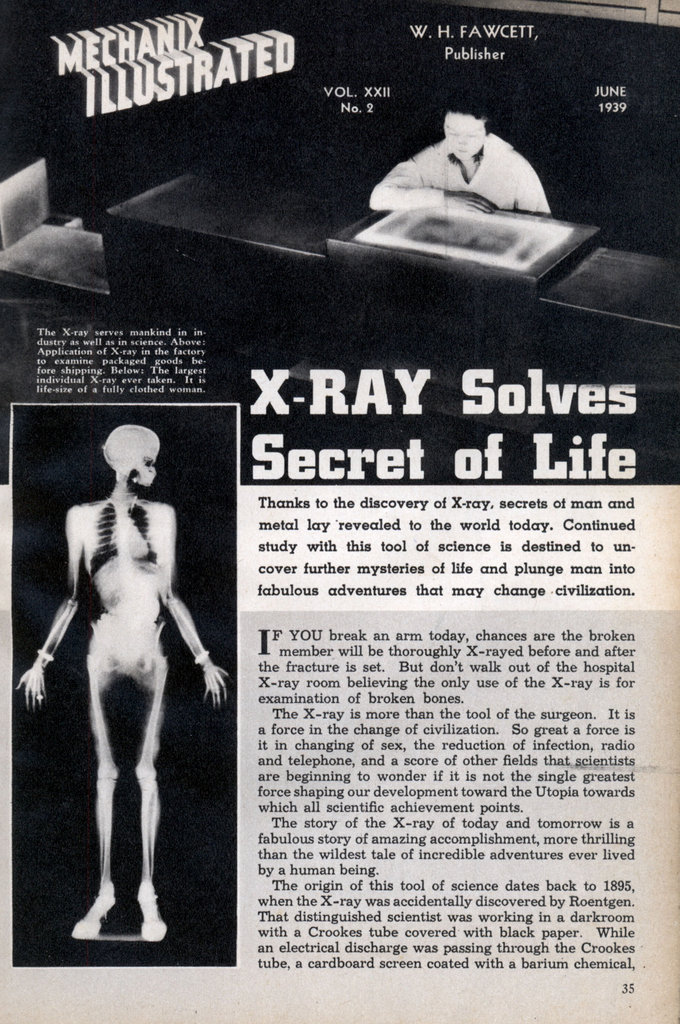 Thanks to the discovery of X-ray, secrets of man and metal lay revealed to the world today. Continued study with this tool of science is destined to uncover further mysteries of life and plunge man into fabulous adventures that may change civilization.

IF YOU break an arm today, chances are the broken member will be thoroughly X-rayed before and after the fracture is set. But don’t walk out of the hospital X-ray room believing the only use of the X-ray is for examination of broken bones.

The X-ray is more than the tool of the surgeon. It is a force in the change of civilization. So great a force is it in changing of sex, the reduction of infection, radio and telephone, and a score of other fields that scientists are beginning to wonder if it is not the single greatest force shaping our development toward the Utopia towards which all scientific achievement points.

The story of the X-ray of today and tomorrow is a fabulous story of amazing accomplishment, more thrilling than the wildest tale of incredible adventures ever lived by a human being.

The origin of this tool of science dates back to 1895, when the X-ray was accidentally discovered by Roentgen. That distinguished scientist was working in a darkroom with a Crookes tube covered with black paper. While an electrical discharge was passing through the Crookes tube, a cardboard screen coated with a barium chemical, lying a few feet away, gave out a strange glow. The startled scientist studied the strange phenomenon and discovered that rays from the tube penetrated solid objects. He also discovered that a hand held before a sensitized photographic plate was actually photographed through and through! He had taken pictures through a solid!

This was amazing! The Berlin Physics

Society, to which the discovery was announced, declared it one of the major discoveries of the era. However, the news of the discovery of X-ray had barely been announced when Roentgen regretted the fact. The whole world became obsessed by these new rays. Some feared them and spoke of similar rays that might bring death and destruction to whole cities and armies by remote control. Others complained of the banishment of all privacy, for here was an agency that could see right through your clothes! A bill was actually introduced into the New Jersey State Legislature forbidding the use of X-rays in opera glasses on the grounds that public modesty would be outragedâ€”as if X-rays could be incorporated in opera glasses! A London firm actually advertised X-ray-proof underwear!

In the meantime the discovery of this new life-giving force revolutionized the scientific study of man and elements. For one thing its discovery made possible new ventures in the study of the cosmic ray. It fired the imagination of science and acted like a shot-in-the-arm in the scientific study of the atom and its hidden secrets. The discovery of X-rays enabled Madame Curie to discover radium while working in her backyard laboratory. From that day to this the lives of some 3,000,000 human beings have been saved from cancer by the use of X-rays and the radium which was discovered as a result of X-rays.

When you think of the number of human beings whose lives have been saved by the X-ray’s diagnosis of tuberculosis, cancer, broken bones, infected teeth, it becomes evident how vital X-rays have been to human life. Without X-rays there would be no radio as we know it today. For the radio is the child of the electron and the electron owes its recognition to the ionization of air by X-rays. And were it not for X-rays we would not have sound movies, or long distance telephones, or radio beacons to guide airplanes, or a multitude of other devices that rely upon electrons for their operation. The real significance of the discovery of X-rays goes even deeper in our industrial life X-rays made possible the study of the characteristics of metal and resulted in the fabrication of new light, strong alloys. They are used in searching for hidden flaws inside steel forgings; even stimulate plant growth in mild doses. We may expect a ten-fold increase in the efficiency of electric lighting and power by using the X-ray to enlarge our knowledge of electricity. The X-ray may eventually enable us to see what really happens inside a wire, a dynamo, a vacuum tube. The efficiency of these units, now impaired through the leakage of power, may be increased by plugging this power loss.

X-rays were followed by the discovery of radium, which in turn was found to be throwing off atoms of helium and turning into lead â€”and man began to speculate about creating new elements at will! The discovery of new metals has opened up exciting possibilities in chemistry and biology as well as in physics. As an example of the way these discoveries may help to remake the body of man of the future, it may some day be possible to X-ray vital organs and learn what particular foods promote their cell growthâ€”simply by mixing radioactive substances (sensitive to X-ray) with the foods. Diseased organs may be rebuilt and bacteria killed by the radiations.

Delving still further in the field of health, science has already begun using the X-ray in “painless operations” to cure bad tonsils, goiter, sinus, even the common cold which is still an enigma to science. As yet, only a few medical men in the country are at work with this new application of the X-ray and they claim prodigious results. In the case of colds, for instance, it is claimed that when the nose, throat and sinus areas are treated by X-ray, susceptibility to cold infection is lessened, and when you catch one, it can be shaken off more readily.

Still another application of the X-ray may bring us the long sought-for secret to the fountain of youth. Heavy water, which was discovered to exist in all water in small quantities, has a bad effect on life. It may contribute to our growing old. If this is proved, some day we may remove the heavy atoms of hydrogen from our water with the aid of X-rays and live 200â€”300 years!

There are more results to be obtained through the use of X-rays in science’s examination of life. The biologist has given an artificial method of producing mutations, changing species at will. This has already been done in the case of fruit flies, and studies with pigeons, mice, rats and cats are going on apace. It is within the realm of possibility for the X-ray technician to make changes in our cattle, to produce better beef steak or more milk or juicier lamb chops much more quickly and more certainly than by the old-style, long drawn-out breeding process.

If it becomes possible to control the sex of animals this way, the scientist can order up a brood of egg-laying hens, for instance, and save all the trouble of producing the less useful roosters. Or cows can be ordered instead of bulls or even, some day, boy babies or girl babies at will! This may be brought about scientifically by the chemical synthesis of hormones which, experimentally, is already a fact. In time the whole physical development of the human body may be chemically controlled by man with the aid of X-rays.

This possibility is already more a fact than a vision, in the laboratory. And to Herman J. Muller (working at the University of Texas at the time) goes much of the credit for the application of the X-ray to this research. Muller used various agencies, such as heat and the X-ray, to study the process of mutation, with the result that he discovered a means for speeding up the mutation rate 150 times; he had artificially speeded up the evolutionary rate! Muller had, with the aid of radiation from X-rays, broken down one of life’s remotest secrets. He had shown science how man could create species of living organisms and replace natural selection by human selection. Thanks to the X-rays, the spring controlling inheritance has been discovered!

The ways in which X-rays are unraveling the secrets of life and of matter have no end. With the aid of X-rays we may yet learn more about electricity, more about electrons, more about cosmic energy, and eventually how to make the immense source of power from hemispherical bodies available to man.