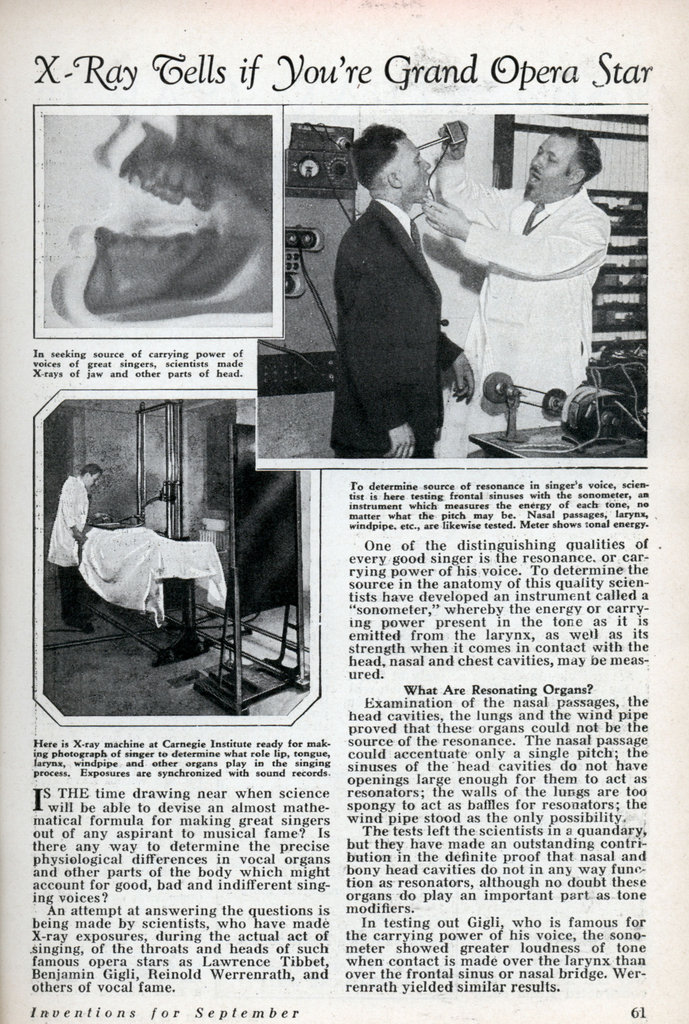 IS THE time drawing near when science will be able to devise an almost mathematical formula for making great singers out of any aspirant to musical fame? Is there any way to determine the precise physiological differences in vocal organs and other parts of the body which might account for good, bad and indifferent singing voices?

An attempt at answering the questions is being made by scientists, who have made X-ray exposures, during the actual act of singing, of the throats and heads of such famous opera stars as Lawrence Tibbet, Benjamin Gigli, Reinold Werrenrath, and others of vocal fame.

One of the distinguishing qualities of every good singer is the resonance, or carrying power of his voice. To determine the source in the anatomy of this quality scientists have developed an instrument called a “sonometer,” whereby the energy or carrying power present in the tone as it is emitted from the larynx, as well as its strength when it comes in contact with the head, nasal and chest cavities, may be measured.

What Are Resonating Organs?

Examination of the nasal passages, the head cavities, the lungs and the wind pipe proved that these organs could not be the source of the resonance. The nasal passage could accentuate only a single pitch; the sinuses of the head cavities do not have openings large enough for them to act as resonators; the walls of the lungs are too spongy to act as baffles for resonators; the wind pipe stood as the only possibility.

The tests left the scientists in a quandary, but they have made an outstanding contribution in the definite proof that nasal and bony head cavities do not in any way function as resonators, although no doubt these organs do play an important part as tone modifiers.

In testing out Gigli, who is famous for the carrying power of his voice, the sonometer showed greater loudness of tone when contact is made over the larynx than over the frontal sinus or nasal bridge. Werrenrath yielded similar results.