Fortune
Issue: Oct, 1961
Posted in: Advertisements
Tags: photocopier, Xerox
4 Comments on XEROX: This was the beginning of office copying. (Oct, 1961)

XEROX: This was the beginning of office copying. (Oct, 1961) 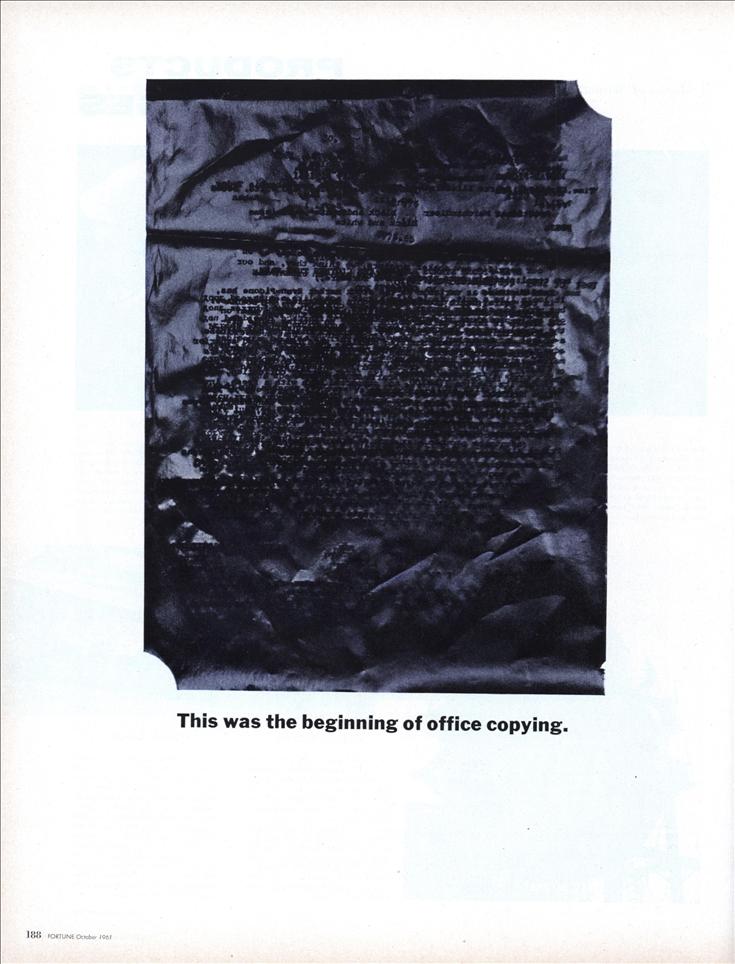 This was the beginning of office copying.

This is the end.

The 914 makes permanent copies on ordinary paper. Your great grandchildren will be able to read Xerox copies.

The 914 Copier is versatile; anything you can see, it can copy in black and white. Even if there’s blue in the original (ball point signatures) or yellow (traffic forms) or red (rubber stamps). What’s more, copies can be made from books or rigid materials. The original doesn’t move.

The 914 is automatic and fast. You can make one to fifteen copies (seven copies a minute) by turning a knob and pushing a button. Turn the knob past “15” and the copies will keep coming until you return and say stop. Adjustments for light and dark originals? There aren’t any. Adding wet chemicals? The 914 is a dry machine. Bone dry.

If you own any other office copying machine, and you’re paying about 5c a copy, retire it and stop throwing good money after bad A Xerox representative would like to bring a 914 Copier to your office and show it to you. But he can’t. The 914 Copier is not a toy; it weighs 648 pounds. That means you’ll have to come to our offices located in principal U.S. and Canadian cities. (People representing thousands of organizations, from United States Steel to the White House are glad they made the trip. You will be, too.) This is the end. At least for the time being.