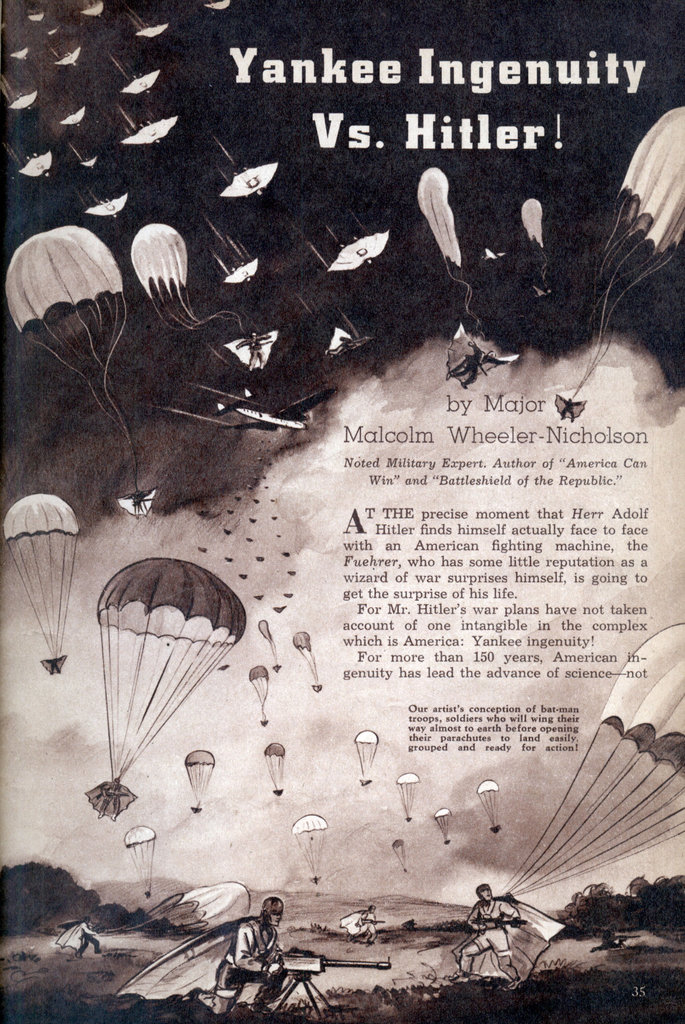 Noted Military Expert. Author of “America Can Win” and “Battleshield of the Republic.”

AT THE precise moment that Herr Adolf Hitler finds himself actually face to face with an American fighting machine, the Fuehrer, who has some little reputation as a wizard of war surprises himself, is going to get the surprise of his life.

For Mr. Hitler’s war plans have not taken account of one intangible in the complex which is America: Yankee ingenuity!

For more than 150 years, American ingenuity has lead the advance of scienceâ€”not only in peace pursuits, but especially in the art of war.

The record shows that always, in the pinch, the Yankee has come through with some new and startling weapon or war method.

For America has been built upon imagination, adaptiveness and mental agility. The continent was first peopled by adventurous souls who dared to look over awesome horizons and push into the unknown. The Nation was made by revolutionary thinkers. It became the wealthiest in the world by developing a new race of men: a race of traders and tinkerers with an original and inventive turn of mindâ€”the same type of people who today make up the readers of Mechanix Illustrated.

Pessimists and cynics have been saying that America can’t do itâ€”that the spirit that built America and made it rich beyond dreams is dead. The pessimists and cynics, however, haven’t any lathes or workbenches of their own; they don’t putter in the basement; they have lost touch with the real people of America, the people who still actually do things with their brains and their hands. These people know that America can do it!

What does the record show A quick glance at American history reveals this panorama:

A band of Revolutionary soldiers making a forced march through the forests, spreading out as skirmishers behind trees and bushes and routing the precision trained, solid-marching ranks of Europe’s best armyâ€”a new-tactic so startling that British generals complained bitterly of it, declaring it was “unfair”!

In 1836, Samuel Colt produces the famous revolver “that won the west,” with standarized ammunitionâ€”changing all concepts of side-arms.

On March 9, 1862, the Monitor and the Merrimac meet in Hampton Roads, Va., and not only blasted each otherâ€”but also blasted every other warship in the world. They were the first armored battleships in history and their engagement rendered all the wooden battleships in the world immediately obsolete.

In 1895, Charles Duryea builds what is generally conceded to be the first successful automobileâ€”and paves the way for all the mechanized armies of today.

Shortly before the turn of the century, Simon Lake and J. P. Holland produce the first successful submarinesâ€”a weapon with which the Germans very nearly won the last wa r

In 1903. the Wrights fly their first airplaneâ€”the precursor of the Luftwaffe. In the early 1900’s, Benjamin Holt conceives the catepillar tread for a tractorâ€”! making possible the panzer divisions of today.

In 1912, an American, Captain Berry, makes the first parachute jump from an airplaneâ€”and foreshadowed the modern ‘chute troops.

This is only a peep-show panorama of the military advances which have been made possible through American ingenuity. There have been dozens of others â€” barbed wire, to mention one more. Americans produce more than 50,000 patents a year. Among them have been thousands upon thousands of military improvements. It can safely be said that any major military mechanism existing today can be traced directly or indirectly to American technical cleverness.

It can certainly be said, without danger of argument, that none of the war machines of today would be in existence had it not been for the exclusively American development of mass production.

The American Navy invented dive-bombing, just as the Army invented parachute troopsâ€”later adopted by the Russians. America has produced what is undoubtedly the most accurate bomb-sight in the world. Air-cooled radial motors on which today’s bombing planes depend for power, smokeless powder, machine guns, automatic rifles â€”they are all American. The pessimists argue that all of this is in the pastâ€”a dead chapter. They declare that Americans have waited too long: war is upon us, and nothing has been done.

The record shows, however, that the same charge has always been made in the past; that America works best under pressure; that America plows the earth, minding its own business, until the Redskins shoot their arrows out of the woods, and America then seizes its musket and fights exactly as hard as she works!

When Herr Hitler puts on the heat, then America will produce!

What shape will Yankee inventiveness take?

Only the great American mind, itself, can answer that question. Whatever shape it may take, it will certainly be unique, and probably fantastic sounding in the light of our present ideas. Every other great military innovation in the past has sounded fantastic to the traditional military mind of the time. If we had been told six months ago that an attempt would be made to land an invading army across waters by means of airplane gliders, our traditional military men would have scoffed at the idea. Yet witness the affair in Crete only recently!

In view of the fantastic developments of the present war, one may be permitted to speculate.

Consider the possibility of bat-man troops! It’s a weird sounding idea. The bat-man stunt was first developed by American trick parachute jumpers at air shows here several years ago. The bat-man equips himself with a set of diving wings attached to his arms, and with a quick-opening parachute. He jumps from a plane, spreads his arm-wings and dives toward the earth. The arm-wings enable him to check the speed of his fall and, more important, to control the direction of his fall. Near the earth, he opens his parachute for the final descent.

The bat-man idea, adapted to military purposes, would solve two of the greatest problems which confront parachute troops in their present form. The first weak spot in parachute troop maneuvers is the fact that airmen are highly vulnerable to enemy fire when coming down the 400 to 500 feet required for a ‘chute to open vertically. Equipped with bat-wings, the ‘chute soldier could flatten out in flight a comparatively short distance above earth, release his parachute and allow it to open while he was in a glide of perhaps 30 degrees. In this manner, the time he would be left helpless, dangling from his shrouds, would be cut down materially.

A second weakness of parachute troops lies in the fact that, under present methods, due to the spaced interval necessary at which the jumpers leave their plane, troops come to earth scattered out all over the terrain. Precious tactical minutes are lost as the troopers assemble on the ground. With bat-wings, on the other hand, the ‘chutists, being able to control the direction of their dives, could assemble in loose formations while still in the air and land in much closer groups.

Here are a few devices which seem to be indicated, on the basis of experience in the present war:

An efficient invasion barge, equipped with heavy guns capable of covering landing movements on the beaches.

A new type of really heavy torpedo, loaded with enough explosive to annihilate a battleship, and so constructed that it can be accurately steered to its objective by human hands. The artist has sketched a possible solution: a small torpedo boat mounted directly on such a huge missile, which could roar at great speed into the midst of an enemy formation, release its deadly load, automatically detach itself from the torpedo, end speed away.

An effective aircraft detector. Accompanying this article, the artist has given his conception of such a weapon. It involves the use of ultra short wave radio beams which sweep the sky and, hitting an aircraft, “bounce back” to the detector. Anti-aircraft guns are mounted in the detector and are automatically aimed and fired by the reflected radio beams.

Some type of radio controlled, moving land mine, as suggested in the illustrations. Loaded with a terrific explosive charge, it could be directed at night against fixed fortifications such as the Siegfried Line.

Perhaps most important, a new system of field maps for the use of staff headquarters in land operations. The swiftness of tank and plane movements in the field have rendered all former systems of operations maps archaic. It was the experience of French and English staffs during the swift-moving battle of Flanders which ended in the rout at Dunkirk, that information radioed to them from observation planes on the movements of panzer columns was obsolete by the time it was set down on staff maps four or five minutes later.

The artist has pictured a possible solution to this problem: a television field map! Observation planes carry aloft portable televisors and broadcast the image of moving tank columns back to field headquarters, where they are picked up by correlated receivers and the staff officers are presented with an actual, living picture of the operations in progress!

These are only a few possible directions which Yankee ingenuity may take to surprise and out-trick a foe.

The important point to be made is that faith in American inventive genius must not be lost. The evidence of its strength and power is before us. Whatever the outcome may be, Herr Hitler, at the moment he faces the Yankees, is in for some unpleasant surprises!