Apparently to make a crossbow modern you just have to give it a sciency name. Still waiting for a Photon Cannon. 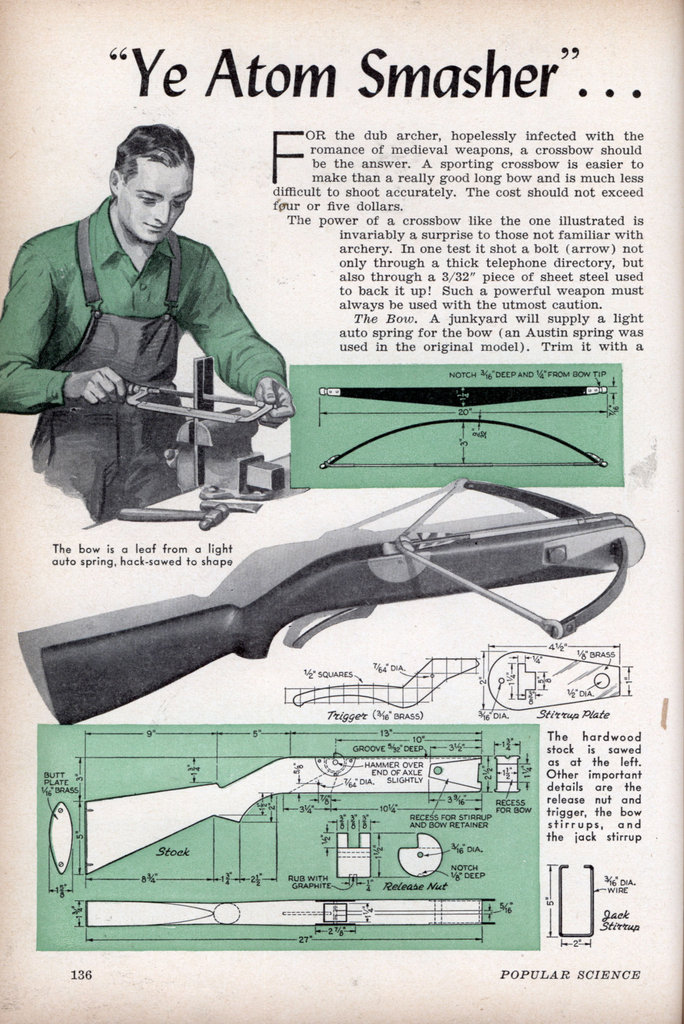 FOR the dub archer, hopelessly infected with the romance of medieval weapons, a crossbow should be the answer. A sporting crossbow is easier to make than a really good long bow and is much less difficult to shoot accurately. The cost should not exceed four or five dollars.

The power of a crossbow like the one illustrated is invariably a surprise to those not familiar with archery. In one test it shot a bolt (arrow) not only through a thick telephone directory, but also through a 3/32″ piece of sheet steel used to back it up! Such a powerful weapon must always be used with the utmost caution.

The Bow. A junkyard will supply a light auto spring for the bow (an Austin spring was used in the original model). Trim it with a hack saw to the shape shown. By this method the taper is all on the bottom edge of the bow, an advantage in crossbow construction. For nocks to attach the bowstring, use blanks of horn or hardwood, 1-3/8″ by 5/8″ by 3/8″, drilled, countersunk, and riveted to the bow with 3/16″ flathead brass stove bolts. Rough them into shape with rasp or sanding wheel. Cut the string grooves with a 7/32″ rat-tail file.

Release Nut and Trigger. Ivory makes the best release nut. Substitutes are aluminum, brass, Babbitt, or phenol-formaldehyde composition. If an old billiard ball is available, it can be turned down at low speed between live and dead centers with a file ground like a parting tool. Make the string and trigger notches as shown.

Cut the trigger with a hack saw and finish with a file. A long trigger is necessary because of pressure on the nut. This pressure also requires the use of plate-brass bearings, as diagrammed, for the release-nut axle.

The Stock. The stock is cut from 2″ by 8″ by 27″ walnut. Hardwood is preferable because it is easier to groove accurately. Rough out the blank according to the drawings, marking holes for the axles of trigger and release nut. Cut the bolt groove with router or saw. Make the initial cut a shallow one, then enlarge it with a 5/16″ rat-tail file. Chisel out trigger and release-nut recesses.

Cut bow stirrup plates from brass as shown and file the slots, enlarging them as necessary to fit the bow; then fit them to the stock. When they fit snugly into their recesses in the stock, bore for the 1/2″ bolt that fastens stirrups and bow securely in place. Bend the stirrup to hold the loading jack from 3/16″ wire, and fit in the bow stirrups.

Shape the stock with a drawknife and rasp. Round the barrel on either side of the groove to reduce friction on the string. Fit the butt plate before finishing the stock with Varnish or oil.

Jack for Drawing Bowstring. Because of the strength of the steel spring, it is necessary to have some mechanical aid in drawing back the bowstring so as to catch it over the nut. A hinged wooden jack is used for this purpose. It is made as shown in the drawings and used as illustrated.

The Bolts. Bolts can be made of 5/16″ commercial doweling or by planing the corners from 11/32″ squares of wood and sanding to size in a chuck. Birch or fir dowels are best. Turn or whittle shoulders for the target points or piles. These can be purchased at sporting goods stores or from dealers in archery supplies. Clinch in place with a center punch and cut off the dowels to a length of 9″ from tip to butt. Sand the butt diameter to A nock is not required for the bowstring.

Turkey or goose feathers are best. Use the stiffest “flight feathers” of the wing. Select three feathers from the same wing of the bird, that is, all right or all left. Lay the feathers on a board, held flat under outstretched finger and thumb, and cut off the rib almost level with the vane, using a sharp knife. Next hold the blade like a pen, guide it by running the second finger along the flattened rib, and cut off the vane and a 1/32″ strip of rib with it.

Another simple method is to strip off the wide part of the feather by pulling its papery root tegument from the rib. This is done by a steady pull, the rib being held in one hand and the vane in the other. Three finished feathers usually can be cut from the widest part of one vane.

Trim the feathers to shape and moisten between layers of damp newspaper. Apply hot glue thinly to the base of a feather, lay it on the shaft, and hold in place for a moment. When the glue has set, sand the bolt again lightly, and paint to suit your fancy. Finish with varnish.

The Bowstring. This is made of high-grade linen thread usually specified as “No. 6 flax repair stitching.” Get about 60 yd. from your shoemaker. Other very strong flax threads can be used. Make the string according to the diagram, and rub the center wrapping with paraffin to reduce friction on the barrel.

In ancient times, the sporting crossbow was used for hunting or for competitive shooting at the butts.