Good Housekeeping
Issue: Mar, 1969
Posted in: Telephone
No Comments on You and your telephone (Mar, 1969) 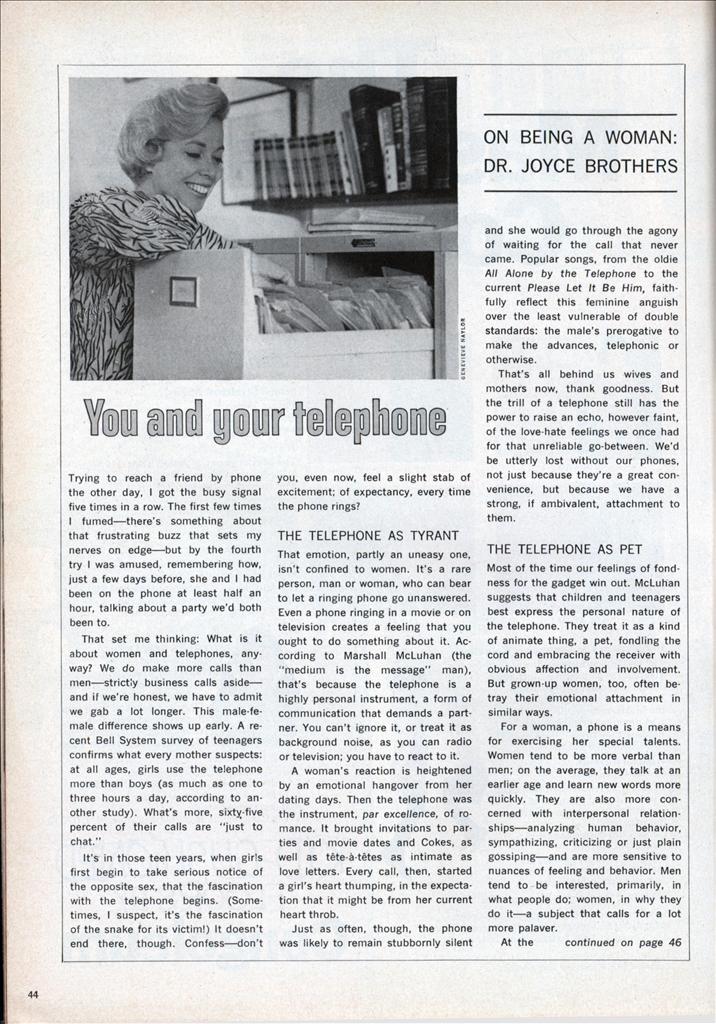 You and your telephone

ON BEING A WOMAN: DR. JOYCE BROTHERS

Trying to reach a friend by phone the other day, I got the busy signal five times in a row. The first few times I fumed—there’s something about that frustrating buzz that sets my nerves on edge—but by the fourth try I was amused, remembering how, just a few days before, she and I had been on the phone at least half an hour, talking about a party we’d both been to.

That set me thinking: What is it about women and telephones, anyway? We do make more calls than men—strictly business calls aside— and if we’re honest, we have to admit we gab a lot longer. This male-female difference shows up early. A recent Bell System survey of teenagers confirms what every mother suspects: at all ages, girls use the telephone more than boys (as much as one to three hours a day, according to another study). What’s more, sixty-five percent of their calls are “just to chat.”

It’s in those teen years, when girls first begin to take serious notice of the opposite sex, that the fascination with the telephone begins. (Sometimes, I suspect, it’s the fascination of the snake for its victim!) It doesn’t end there, though. Confess—don’t you, even now, feel a slight stab of excitement; of expectancy, every time the phone rings?

THE TELEPHONE AS TYRANT

That emotion, partly an uneasy one, isn’t confined to women. It’s a rare person, man or woman, who can bear to let a ringing phone go unanswered. Even a phone ringing in a movie or on television creates a feeling that you ought to do something about it. According to Marshall McLuhan (the “medium is the message” man), that’s because the telephone is a highly personal instrument, a form of communication that demands a partner. You can’t ignore it, or treat it as background noise, as you can radio or television; you have to react to it.

A woman’s reaction is heightened by an emotional hangover from her dating days. Then the telephone was the instrument, par excellence, of romance. It brought invitations to parties and movie dates and Cokes, as well as tete-a-tetes as intimate as love letters. Every call, then, started a girl’s heart thumping, in the expectation that it might be from her current heart throb.

Just as often, though, the phone was likely to remain stubbornly silent and she would go through the agony of waiting for the call that never came. Popular songs, from the oldie All Alone by the Telephone to the current Please Let It Be Him, faithfully reflect this feminine anguish over the least vulnerable of double standards: the male’s prerogative to make the advances, telephonic or otherwise.

That’s all behind us wives and mothers now, thank goodness. But the trill of a telephone still has the power to raise an echo, however faint, of the love-hate feelings we once had for that unreliable go-between. We’d be utterly lost without our phones, not just because they’re a great convenience, but because we have a strong, if ambivalent, attachment to them.

THE TELEPHONE AS PET

Most of the time our feelings of fondness for the gadget win out. McLuhan suggests that children and teenagers best express the personal nature of the telephone. They treat it as a kind of animate thing, a pet, fondling the cord and embracing the receiver with obvious affection and involvement. But grown-up women, too, often betray their emotional attachment in similar ways.

For a woman, a phone is a means for exercising her special talents. Women tend to be more verbal than men; on the average, they talk at an earlier age and learn new words more quickly. They are also more concerned with interpersonal relationships—analyzing human behavior, sympathizing, criticizing or just plain gossiping—and are more sensitive to nuances of feeling and behavior. Men tend to be interested, primarily, in what people do; women, in why they do it—a subject that calls for a lot more palaver.

At the same time, a woman’s role in the home cuts her off from direct contact with much of the outside world, especially when her children are young. So she makes up for it by using her telephone as an extension of herself, as a vehicle for social chitchat, for catching up with the local news, giving and receiving moral support— the kind of conversation her husband’s involved in all day at his work (without even noticing it), but which —if it weren’t for the phone—she’d be largely deprived of.

There’s another thing men forget when they complain about phone bills and that is it’s usually the wife’s job to maintain friendly contacts with her husband’s family as well as her own. That’s no small task, and the woman who prefers just to pick up the phone rather than carry on a never-ending correspondence can hardly be blamed. (Incidentally, two-thirds of all longdistance calls from home phones are made by women.) But women’s love affairs with the telephone are hardly one long idyll. There are calls from salesmen who won’t take no for an answer, invitations they’d just as soon duck, umpteen fund-raising appeals. Increasingly, too, these days women are bothered by anonymous calls from weird, sick people who derive pleasure from shocking others with obscene conversation.

Unless you resort to an unlisted number (a device, incidentally, as popular with status seekers and bill dodgers as with those who need protection), you are more or less at the mercy of anybody with a dime. The phone is a great invader of privacy.

All this, together with the fact that a phone can be the bearer of bad news as well as good, helps to account for our mixed feelings toward Alexander Graham Bell’s invention. In addition, a telephone can actually create an intense feeling of loneliness, for, by remaining silent though connected, potentially, to all the world, it seems to mock the person whom no one cares enough about to call—at least just then.

All the same, the Bell people don’t have to worry. Women are no more likely to desert their telephones than their husbands, and men had just better get used to the idea!