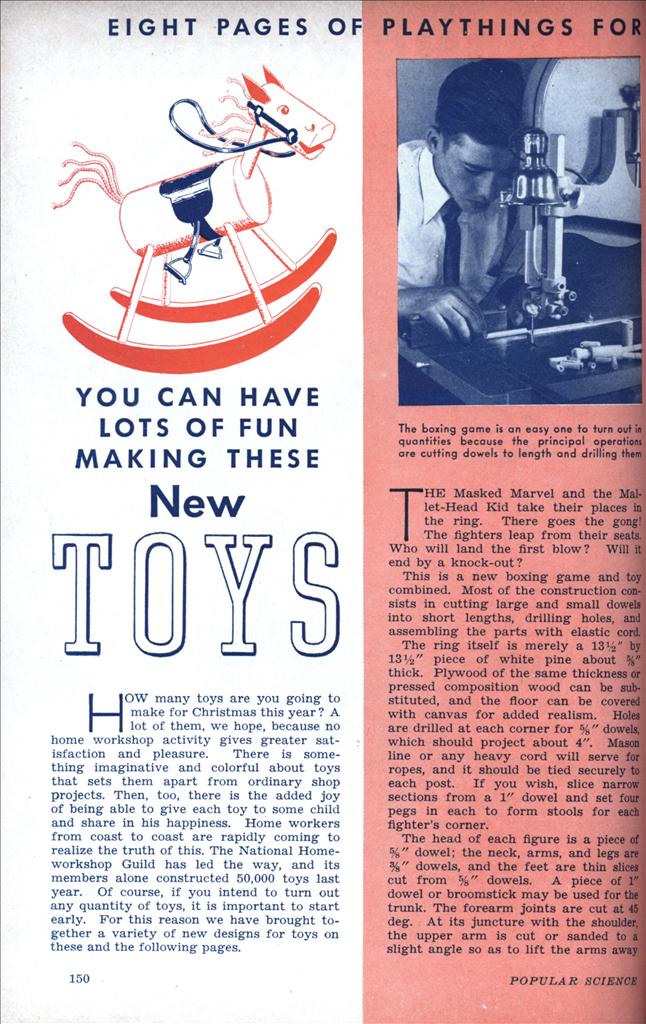 You Can Have Lots of Fun Making These New Toys

HOW many toys are you going to make for Christmas this year? A lot of them, we hope, because no home workshop activity gives greater satisfaction and pleasure. There is something imaginative and colorful about toys that sets them apart from ordinary shop projects. Then, too, there is the added joy of being able to give each toy to some child and share in his happiness. Home workers from coast to coast are rapidly coming to realize the truth of this. The National Home-workshop Guild has led the way, and its members alone constructed 50,000 toys last year. Of course, if you intend to turn out any quantity of toys, it is important to start early. For this reason we have brought together a variety of new designs for toys on these and the following pages.

THE Masked Marvel and the Mallet-Head Kid take their places in the ring. There goes the gong! The fighters leap from their seats. Who will land the first blow? Will it end by a knock-out?

This is a new boxing game and toy combined. Most of the construction consists in cutting large and small dowels into short lengths, drilling holes, and assembling the parts with elastic cord.

The ring itself is merely a 13-1/2″ by 13-1/2″ piece of white pine about 5/8″ thick. Plywood of the same thickness or pressed composition wood can be substituted, and the floor can be covered with canvas for added realism. Holes are drilled at each corner for 5/8″ dowels, which should project about 4″. Mason line or any heavy cord will serve for ropes, and it should be tied securely to each post. If you wish, slice narrow sections from a 1″ dowel and set four pegs in each to form stools for each fighter’s corner.

The head of each figure is a piece of 5/8″ dowel; the neck, arms, and legs are 3/8″ dowels, and the feet are thin slices cut from 5/8″ dowels. A piece of 1″ dowel or broomstick may be used for the trunk. The forearm joints are cut at 45 deg. At its juncture with the shoulder, the upper arm is cut or sanded to a slight angle so as to lift the arms away from the body, as can be seen in the photos.

Drill small holes through the length of each dowel and assemble them as you would a string of beads, using elastic cord. At the top of the head, the bottom of both feet, and the ends of each arm, small wood plugs must be inserted and cut off square. These will hold the ends of the elastic. An elastic which is almost loose will result in a figure that it very limber and quick to go into action, but if the elastic is stretched as much as possible, the figure will be comparatively rigid.

Purely for the sake of appearance, each figure should be fitted with boxing gloves cut from the soft leather of an old glove and glued in place. Bits of leather can also be glued on to form features for the heads; or you can use black paper in the same manner, or paint them with a small brush. Boxing trunks may be added.

Two 11″ lengths’ of stiff fence wire are required for operating each fighter. One end of each wire is shaped into a loop. The wires pass through screw eyes near the top of each corner post, as illustrated, and the free ends fit into holes drilled into the ends of the dowels that serve as the forearms of each figure. The wire controls should be grasped in each hand. In “managing” each fighter, all of the rules of the game should be observed. The controls are just long enough to permit one of the battling dowels to be knocked into a corner or into the ropes, but not long enough for either fighter to reach his opponent’s corner. Knock-outs may, of course, be only technical, and the game is then counted on points, but it is also possible to assemble the figures so loosely that the plugs which anchor the elastic will pull out when the fighting becomes too furious. This adds much to the excitement and hilarity.

If these boxing toys are to be used as gifts, the main points of the game may be typed on sheets of paper and then glued to the underside of the baseboard.—Kenneth Murray.

An EVERLASTING sand motor provides the power to drive the mechanical organ grinder illustrated. To “wind up” the mechanism, it is necessary merely to give the box a complete turn in the direction indicated in the drawings. This brings the sand back into the hopper ready to run down and turn the small paddle wheel. Other adaptations will suggest themselves, such as a woman pumping water or a hobo sawing wood.

For the box, plywood is used, the joints being well fitted to prevent leakage of sand. The six-bladed paddle wheel is scroll-sawed from a block of white pine. The axle is a piece of bicycle spoke turning in glass-bead bearings, which are recessed into the wood as shown. Short lengths of brass tubing will serve just as well as the beads.

The hole in the sand hopper should not be over 1/8″ in diameter for beach sand. Incidentally, beach sand is the best because the grains are smooth and pour more readily. Sand from a creek bed is also satisfactory. To facilitate adjustment, the back panel with the window is fastened with No. 3 screws.

The organ grinder is scroll-sawed from material and painted in bright colors. The girl is painted on cardboard, together with the window frame, and glued to the box, as is the hand organ.—L. R. Browne.

THE busy driver of this tractor pivots from side to side when the machine is pushed or drawn by a string. All details of construction are shown in the drawings on the following page.

The wooden block that serves as the chassis is notched at the back for the animating mechanism, and in front for the wheel bearing. Bore the bearings oversize to allow free movement for the axles. The radiator is attached with two shingle nails.

Turn the rear wheels from plywood, the front from disks sliced off dowel stock. The wabble wheel is a similar disk, bored obliquely to give a sidewise cam movement. When assembling the rear end, use washers and wire cotter pins to limit end play, and glue on the wheels.

Arch the seat block to clear the wabble wheel and slot it for the wire fork projecting below the driver. Notch the front to clear the driver’s legs. Pivot the man with a shingle nail through his lap into the seat. Adjust the seat with the fork above the axle, and nail it on.

Paint the parts before assembling. Dipping is a convenient method, especially if a number of the toys have been constructed. The tractor illustrated has an orange body, yellow wheels, and black tires and radiator. The driver has pink face and hands, blue coveralls, and black hat.—Edwin M. Love.

WHEN pulled, on a string, the wooden turtle illustrated below moves its legs and draws its head in and out in a lifelike manner.

Turn the shell from a band-sawed pine blank. Hold it in a chuck for recessing, and then fit the recess to another chuck for shaping the outside. Groove the segment zones and divide them radially.

Bend the crankshaft from baling wire, the bearing from a strip of sheet iron. The connecting rods are strips of sheet iron, pushed onto the cranks before the wheels are added. The latter are keyed by bending the shaft ends back on themselves and forcing them into small holes in the wheels, where a drop of celluloid cement holds them. Screw the bearing inside the recess, slit the ends to the bearing holes, and force in the crankshaft.

Shape the head and neck semicircular on top. The neck slides in a groove in the shell, being held with a metal plate. The connecting rod enters a slot, where a nail holds it. The tail is a strip of inner-tube rubber.

COLORFUL Toy Freighter FOR QUANTITY PRODUCTION BOATS are among the most fascinating toys for young children. If they can play with a boat in the bathtub or in a wading box or pool, so much the better, but they also get much enjoyment in playing with one on the floor if it is of a flat-bottomed type.

The little freighter illustrated is adapted for either purpose, and the design is especially well suited to quantity production because of its simple construction and the small amount of materials required. The capacious cargo hold will carry a large shipment of dummy boxes and barrels made from scraps of wood.

White pine, redwood, or any fairly lightweight wood may be used. The hull is built up as shown and fastened with casein glue to a waterproof plywood bottom. The plywood should be of the outdoor type. Avoid using nails or brads unless galvanized, because ordinary nails will eventually cause rusty streaks.

Deck planking can be simulated by scoring the wood with a hard lead pencil and then varnishing the surface. Take care to round off the tip of the mast as well as that of the dowel behind the deck house. If the toy is intended for a very small child, the mast should be eliminated so that there would be no danger of his falling upon it.

Use the brightest reds and greens in painting, because the appeal of this freighter lies principally in its coloring. Stenciled windows and doors add to its appearance, but are not absolutely necessary. The cargo hold is painted gray.—Dick Hixon.

FROM the work sheets of the Bison Home-workshop Guild, Buffalo, N. Y., were taken the accompanying drawings of three toys designed especially for quantity production. It was the remarkable toy project of this club which won for it the national award for civic activities in the 1939 achievement contest of the National Homeworkshop Guild.

The drawings are self-explanatory. When a large number of toys are to be made, it is necessary to turn the parts out systematically and to use nailing jigs to speed up the assembly. In the case of the toy truck, for example, the stock for the hoods can be cut in long pieces, with the sides beveled to 10 deg. The individual hoods are then cut to length and beveled on the front. Finally the shaded portions of the hood are sanded off.

The wheels are cut from 3/8″ stock with a 1-3/4″ hole saw and later crowned on a sanding disk. This is accomplished by putting the blank wheel on a pin made by driving a nail in a piece of scrap lumber about 1″ back of the end and cutting off the head of the nail. The wheel is held against the sanding disk and allowed to spin on the pin. By swinging the handle end of the stick back and forth in an arc, a smooth, even crown to represent the tire can be put on the wheel in a few seconds. It is best to wear a glove on one hand and let two fingers ride on the wheel.

ONLY the simplest type of sawing, drilling, and nailing is needed to make toy garden furniture, fences, and gates from clothespins and scraps of plywood. Each clothespin must have one of its legs cut off as indicated in the drawings, but the waste pieces are utilized for fence and gate pickets.

The gateway requires two clothespins nailed to a plywood arch so as to leave a 2″ wide opening. The gate itself is cut from plywood 1-3/4″ long by 1-5/8″ high and has three pickets nailed to it. The hinges are made of wire, and the gateway and adjacent sections of fence are linked together with wire .—Hazel F. Showalter.