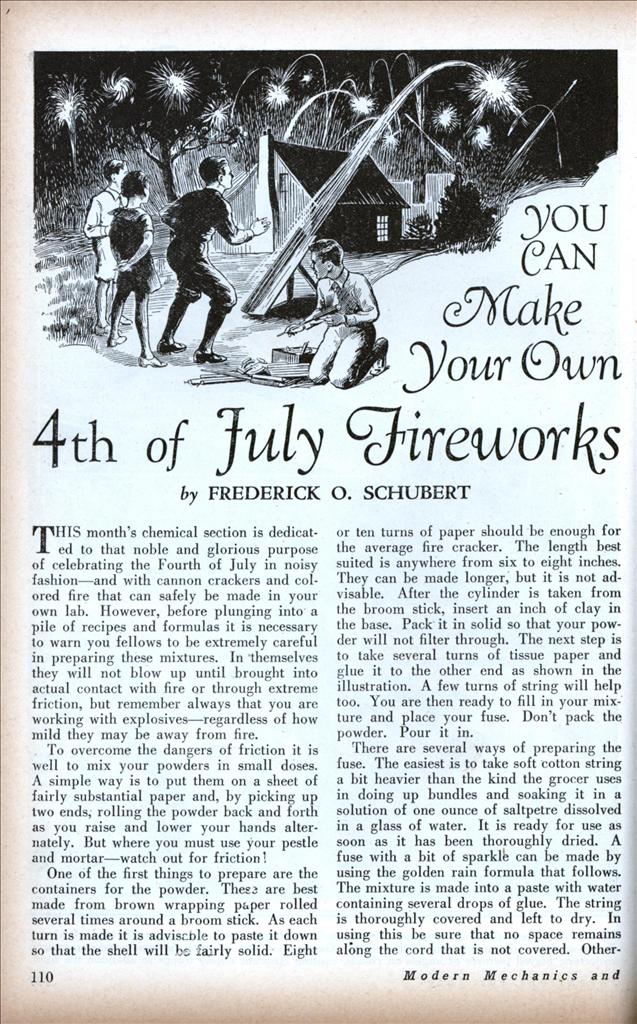 YOU CAN Make Your Own 4th of July Fireworks

THIS month’s chemical section is dedicated to that noble and glorious purpose of celebrating the Fourth of July in noisy fashion—and with cannon crackers and colored fire that can safely be made in your own lab. However, before plunging into a pile of recipes and formulas it is necessary to warn you fellows to be extremely careful in preparing these mixtures. In themselves they will not blow up until brought into actual contact with fire or through extreme friction, but remember always that you are working with explosives—regardless of how mild they may be away from fire.

To overcome the dangers of friction it is well to mix your powders in small doses. A simple way is to put them on a sheet of fairly substantial paper and, by picking up two ends, rolling the powder back and forth as you raise and lower your hands alternately. But where you must use your pestle and mortar—watch out for friction!

One of the first things to prepare are the containers for the powder. These are best made from brown wrapping paper rolled several times around a broom stick. As each turn is made it is advisable to paste it down so that the shell will feel fairly solid. Eight or ten turns of paper should be enough for the average fire cracker. The length best suited is anywhere from six to eight inches. They can be made longer, but it is not advisable. After the cylinder is taken from the broom stick, insert an inch of clay in the base. Pack it in solid so that your powder will not filter through. The next step is to take several turns of tissue paper and glue it to the other end as shown in the illustration. A few turns of string will help too. You are then ready to fill in your mixture and place your fuse. Don’t pack the powder. Pour it in.

There are several ways of preparing the fuse. The easiest is to take soft cotton string a bit heavier than the kind the grocer uses in doing up bundles and soaking it in a solution of one ounce of saltpetre dissolved in a glass of water. It is ready for use as soon as it has been thoroughly dried. A fuse with a bit of sparkle can be made by using the golden rain formula that follows. The mixture is made into a paste with water containing several drops of glue. The string is thoroughly covered and left to dry. In using this be sure that no space remains along the cord that is not covered. Other- wise your fuse will burn out before it reaches the powder.

And now, here are the formulas. But remember, all the ingredients must be dry and powdered separately and then mixed on a sheet of paper, without friction. Always bear in mind that sulphur and chlorate of potassium will “go boom” when rubbed together. Keep the ingredients away from open flames.

A nice bright red fire can be made by using 20 parts of strontium nitrate finely powdered, six parts of sulphur, 5 parts of saltpetre and one part of lampblack. Your druggist can supply them all in powdered form. They may cost a few cents more that way, but it is safer than trying to powder them yourself.

One of the safest noise-makers to work with are the caps for pistols and canes. They are made by folding a small portion of a mixture of equal parts of chlorate of potash and sulphur into tin foil. The proper fold is shown in the drawing. They are set off by the force of the hammer in the pistol or cane, and are not dangerous because of the small quantity of powder mixture used. It is suggested that not more than a pinch be used for each cap.

In burning colored fire, it is best to place the powder in a pill box and ignite it there. If you – experiment with rockets, you will want to construct a platform from which to launch them. A good idea of an efficient launching platform can be obtained from the drawing at the beginning of this article. A simple v-shaped trough of wood or metal, supported at the desired angle by a couple of props or legs, will do the trick. Of course, the angle of the platform will have a very great deal to do with the path taken by the rocket. Usually this angle should be at least 60 degrees to permit the rocket to attain a satisfactory height. A shallower angle than this will produce a flattened trajectory of the rocket which will not be as satisfactory as a sharper, higher path through the sky.