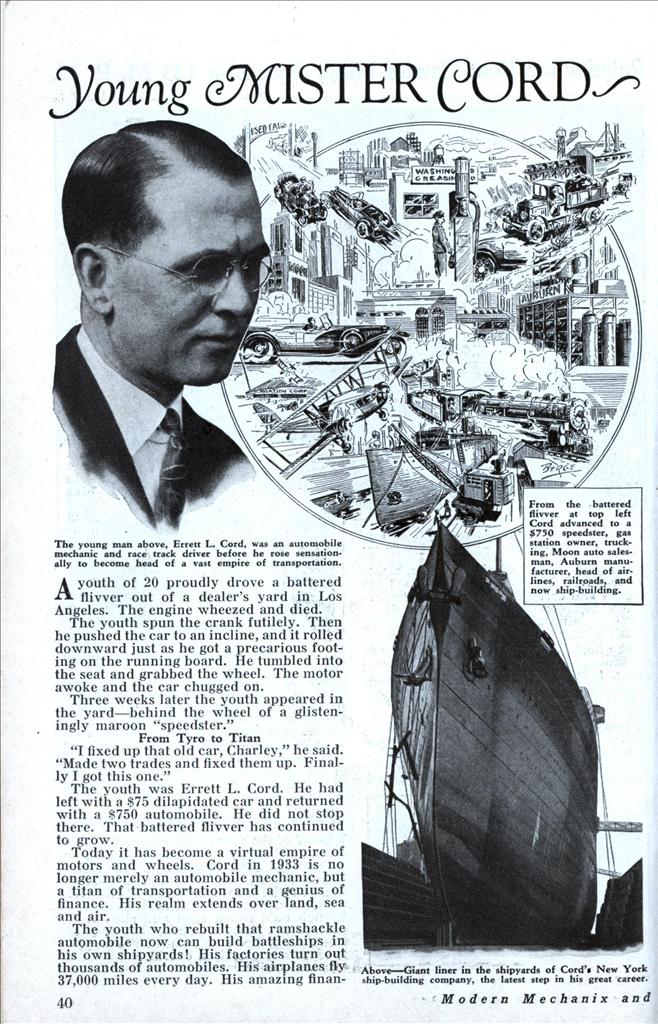 From a battered flivver E. L. Cord has built an empire of automobiles, airplanes, ships and railroads. Here is the story of the amazing career of this young mechanic who became a financial genius.

A youth of 20 proudly drove a battered flivver out of a dealer’s yard in Los Angeles. The engine wheezed and died.

The youth spun the crank futilely. Then he pushed the car to an incline, and it rolled downward just as he got a precarious footing on the running board. He tumbled into the seat and grabbed the wheel. The motor awoke and the car chugged on.

Three weeks later the youth appeared in the yard—behind the wheel of a glisteningly maroon “speedster.”

From Tyro to Titan.

“I fixed up that old car, Charley,” he said. “Made two trades and fixed them up. Finally I got this one.”

The youth was Errett L. Cord. He had left with a $75 dilapidated car and returned with a $750 automobile. He did not stop there. That battered flivver has continued to grow.

Today it has become a virtual empire of motors and wheels. Cord in 1933 is no longer merely an automobile mechanic, but a titan of transportation and a genius of finance. His realm extends over land, sea and air.

The youth who rebuilt that ramshackle automobile now can build battleships in his own shipyards! His factories turn out thousands of automobiles. His airplanes fly 37,000 miles every day. His amazing financial fingers have reached even to railroads.

He has fought and conquered Wall Street. But behind his great ability to marshal financial forces is an innate love for motors and wheels and things mechanical.

As president of the $120,000,000 Cord Corporation and chairman of the board of the Aviation Corporation, he continues to look into the future— and events of recent weeks show him steadily gaining not only- increased fortune and prestige—but more wheels and motors.

The success of the youthful Errett L. Cord in the field of transportation and finance is one of the most stirring narratives of American opportunity.

Before he was twenty-one, with his love for and knowledge of automobiles, he became an accomplished automobile salesman and made money speedily in Los Angeles agencies. He began to organize. He obtained backing for business—dealing with automobiles, of course—filling and greasing and washing stations.

While directing those he took a venture in transportation, operating a hauling service for mines in Arizona’s mountains. Cord found mountain hauling as slow in producing profits as it was in its motion on the steepest grades of his route. He concentrated on the washing and greasing stations—and expanded.

The step he took toward widening his trade quickly proved too fast a step. He soon found he did not own the business and his only assets left were his native shrewdness, his sales ability and his knowledge of motors and wheels. He turned to a larger field to apply them—Chicago.

He was twenty-five years old in 1919 when he arrived in Chicago looking for a job. He sold Moon cars so successfully that he became a partner in the principal agency in the city.

But he wanted to make automobiles. He saw an opportunity. He consulted with bankers interested in the weakening Auburn Automobile Company. He became manager in 1924, then vice-president, then president. Auburn took on new life.

Cord, the former race driver, steered his company into pioneer fields in engineering, in design, in production methods. He studied metallurgy and applied discoveries. Auburn prospered as Cord kept the wheel.

Cord looked forward. He designed the first front-wheel drive automobile, the Cord, and made it popular. He took over the Deusenberg— and a little more than ten years after he “fixed” his first flivver, he was making the world’s highest-priced automobile.

He made money, lots of it. His company’s shares skyrocketed in the stock market, soaring to $500 a share in 1929. The world of business suddenly awoke to the fact that 34-year-old Cord controlled automobile factories and was buying aviation stock, while his fortune and prestige were growing rapidly.

Typical of Cord, the young genius learned the flying business from the pilot’s cockpit. He received his flying license in 1929.

Soon after he formed the $125,000,000 Cord Corporation as a holding company for his interests. He had reached a giant’s stature in finance. He aided in formation of two air lines while planning further invasion of aviation. He gained control of the Stinson Aircraft Company and built his own airplanes. He ordered 100 Stinsons made in his factory for his Century Air Lines and flew one of them.

Solidly entrenched eastern capital ruled Aviation Corporation, but young Mr. Cord was born in Missouri and he had that “you’ve got to show me” attitude. He issued an ultimatum: directors must not proceed with a secret deal to trade 2,000,000 shares of the corporation’s stock for certain assets of the North American Aviation Corporation.

LaMotte F. Cohu, dominant in Aviation Corp., with the backing of the Lehman fortune in Wall Street, defied Cord. The young financial genius, however, went to court and got an order restraining the directors from making the deal. A fight to the finish became a certainty.

Cord said: “I personally will force Cohu out.”

The fight gained momentum through full page newspaper advertisements, asking 28,000 stockholders to offer proxies for each side in the battle for votes and control of Aviation Corp. Dramatically Cord flew from California to be present at the finish fight at the stockholder’s meeting in Wilmington, Delaware.

And when the smoke of the battle cleared, Cord was the victor.

With control of Aviation Corp., Cord ruled American Airways. There was something to tinker with! Cord gave full attention to that great air mail, express and passenger line. Today he can claim a major achievement in transportation, for his own planes cover 72 cities in the United States and Canada, flying 37,000 miles every 24 hours, from coast to coast and from the gulf to Canada.

Cord, however, was not at the peak of his power. He became the taxi king of America. In 1933 he and his associates gained control of the Checker Cab Manufacturing Company and subsidiaries, including the Yellow Cab Co., Checker Taxi Company, Parmalee Transfer and Parmalee Transportation. Thus he owned the largest taxicab factory in the country, maker of 8,000 New York and 3,000 Chicago cabs.

The railroads came next. In August, 1933, Cord interests bought 100,000 shares of stock of the Kansas City Southern Railway, 20 per cent of the outstanding shares. Now Cord could run locomotives—could even take the throttle of one if he wanted to.

As yet the young conqueror of land and air transit had not reached out to the sea. Very recently he took a spectacular dive into ocean transportation. For $2,000,000 he obtained control of the New York Shipbuilding Company. It was one of the oldest builders of ocean liners in the country, having built 406 naval, passenger, and cargo vessels.

The day after Cord took over New York Shipbuilding the Navy Department in Washington gave Cord’s shipyard a $38,450,000 order for two 10,000-ton cruisers and four destroyers. Cord shrewdly had foreseen shipbuilding as part of President Roosevelt’s new deal. He got the biggest slice of the Navy’s contracts.

Cord had driven his California flivver to a a high peak in the world of transportation. Not only did he aid in moving Americans about by rail, by automobile, by airplane—but now he could make and tinker with battleships!