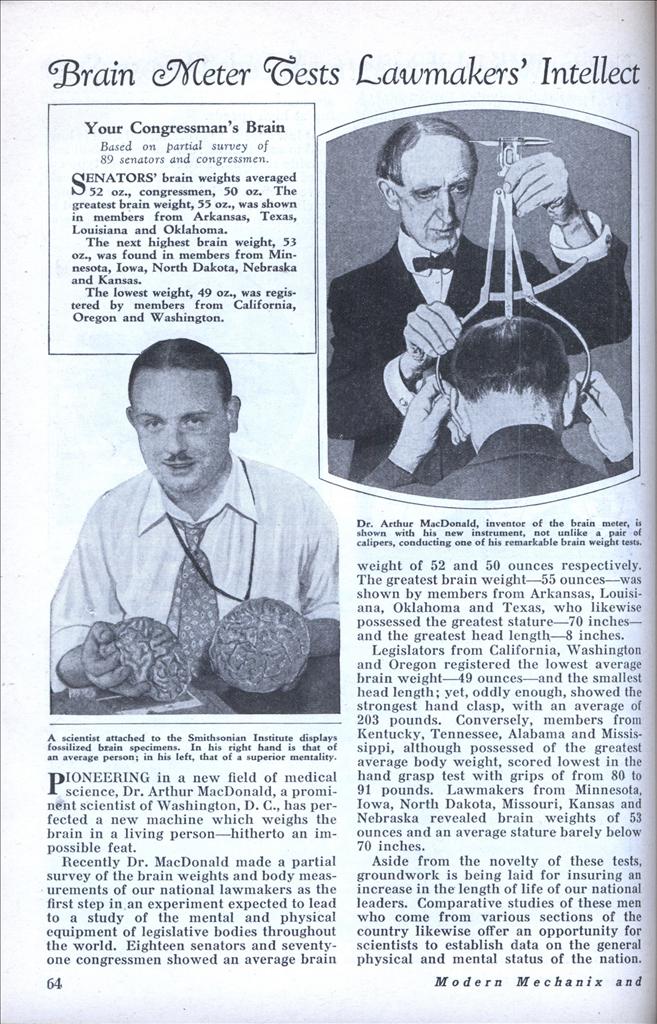 Based on partial survey of 89 senators and congressmen.

The next highest brain weight, 53 oz., was found in members from Minnesota, Iowa, North Dakota, Nebraska and Kansas.

The lowest weight, 49 oz., was registered by members from California, Oregon and Washington.

PIONEERING in a new field of medical science, Dr. Arthur MacDonald, a prominent scientist of Washington, D. C, has perfected a new machine which weighs the brain in a living personâ€”hitherto an impossible feat.

Recently Dr. MacDonald made a partial survey of the brain weights and body measurements of our national lawmakers as the first step in an experiment expected to lead to a study of the mental and physical equipment of legislative bodies throughout the world. Eighteen senators and seventy-one congressmen showed an average brain weight of 52 and 50 ounces respectively. The greatest brain weightâ€”55 ouncesâ€”was shown by members from Arkansas, Louisiana, Oklahoma and Texas, who likewise possessed the greatest statureâ€”70 inchesâ€” and the greatest head lengthâ€”8 inches.

Legislators from California, Washington and Oregon registered the lowest average brain weightâ€”49 ouncesâ€”and the smallest head length; yet, oddly enough, showed the strongest hand clasp, with an average of 203 pounds. Conversely, members from Kentucky, Tennessee, Alabama and Mississippi, although possessed of the greatest average body weight, scored lowest in the hand grasp test with grips of from 80 to 91 pounds. Lawmakers from Minnesota, Iowa, North Dakota, Missouri, Kansas and Nebraska revealed brain weights of 53 ounces and an average stature barely below 70 inches.

Aside from the novelty of these tests, groundwork is being laid for insuring an increase in the length of life of our national leaders. Comparative studies of these men who come from various sections of the country likewise offer an opportunity for scientists to establish data on the general physical and mental status of the nation.