That is a gorgeous toolkit on the third page. 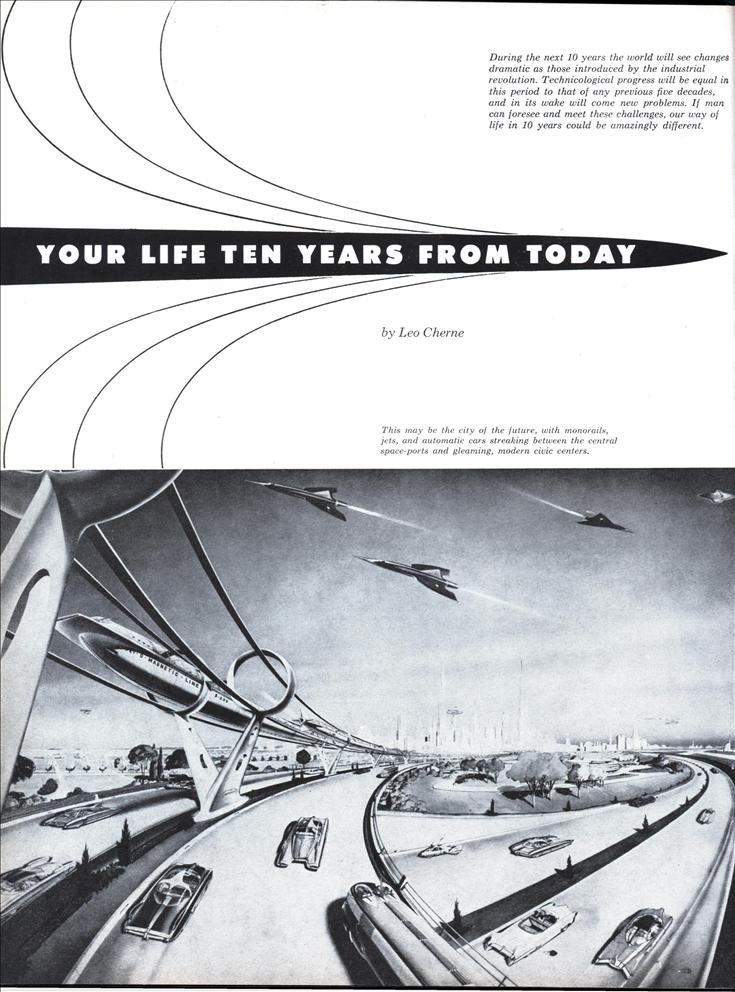 YOUR LIFE TEN YEARS FROM TODAY

During the next 10 years the world will see changes dramatic as those introduced by the industrial revolution. Technicological progress will be equal in this period to that of any previous five decades, and in its wake will come new problems. If man can foresee and meet these challenges, our way of life in 10 years could be amazingly different.

The progress of these next 10 years will be as dramatic, as filled with change, as jampacked with impact for American business in the total American community as any 50 years in the entire development of civilized man.

Here are some of the things we know. Ten years from now our population will be larger by some 24 million people — that’s the new market, or additional market. There will be a five-hour drop in the work week with the most fabulous increase in leisure time the civilized world has ever seen. Personal income will be up nearly 30 per cent. The output of business and service institutions will have increased another 50 per cent by then, one half again as much as business is now turning out. This is a measure of what will be available for sales.

The market will be there with its money. The institutions will be there with their products. The customer will be there with his desires. They must be brought together — they must be brought together, because on the other side of the coin is danger. Every year will add four per cent to our productivity, for each year we can produce the same quantity with four per cent less labor— that’s without the additions to population. The things we’ll sell must make 2,700,000 additional jobs this year if we are to end the year exactly where we started it, no further ahead, no records broken as in ’55, no future challenges foreseen and met.

These 10 years will see a revolution in distribution as dramatic, and, in some ways, as disturbing as were the changes which were produced by the industrial revolution. We will in these 10 years finally come to an end of what is fundamentally a dead-end road of selling, the opportunity of selling more of the same in the same old way. There is literally a point at which the customer rebels against a third TV set, against 50 more horsepower that only enables the car to stand bumper to bumper with the other cars on a mad Sunday afternoon on a contrivance that some American humorist called a highway. The method of selling, the incentive to spur the mechanism, even the purpose, will, within these 10 years, undergo dramatic change as distribution is forced to make a belated effort to catch up to the fantastic new world which has already opened to production — the world of new technology.

The world we are entering during these 10 years is based on the most incredible investment ever made by man in scientific research. But research is a big company’s tool, with a big company payoff, and the smaller enterprise, the independent, may find itself sitting on the sidelines as business multiplies, as merger, diversifications and decentralization move the giant into every last corner of enterprise in America.

These 10 years will be filled with opportunities and challenges that can only be hinted at. We are at the frontier, for example, of a new age of personal health and medicine. We will find ourselves deep in the paradox that as the age of effective man is lengthened and his energy and wisdom increased, the retirement age gets lower and lower. It may be in this reservoir that selling in America will find its ultimate answer for effective manpower to meet this awesome challenge.

Within these 10 years the wide variety of new drugs will increase the capacity of every one. The antibiotics have already killed infection; the cortisones will smash fatigue and the relaxers will suppress anxiety. But only man can create purpose. And it is the search for purpose which will be the ultimate goal of this incredible new enterprise.

These ten years will find us already using the new instruments of power, atomic and solar. As we concentrate on the word atomic with which you are more familiar, take your long-term view, keep your mind open for the power of the sun. The scientists are virtually agreed that man’s age-long quest for free power will be found within the next 25 years in the sun itself. The most historic development that has occurred within this generation occurred in 1955. This was the opening of the first, effective private solar plant.

These 10 years will see a word which has been abused and misused translated into real meaning — automation. What is talked about as automation today in most instances is not automation, it is increased mechanization, itself a dramatic step. But automation is something other than increased mechanization — it’s the application of a brain to the machine, not merely the elimination of physical and mental power by the machine . . . a machine that thinks — a machine which has memory, that can tune back its own experience to itself and which consequently can correct itself.

The most important consequence of this development will not be the manpower displaced, the retraining of vast millions of American labor, nor the fact that it opens up vast new frontiers of production, but another one: the automated factory can’t afford to stop. It will not be able to tolerate even a slowdown. We will, within these 10 years find ourselves unable to permit not only depression, but even significant recession. We cannot order a lay off for a period of 30 days. An automated factory grinds on. It must, to pay for itself. Planning, the sinister word of the New Deal, will be the essential of private American industry in this fabulous new world.

We will yet get to the bottom of our persistent problems, the farm for example. Not a soil bank, not a billion of additional government investments, not any of these very obviously needed measures which may or may not work, but chemistry will bail out the farm as it is bailing out the traditional industry of the western world, coal.

Above and beyond all of these perhaps the greatest challenge of all is facing us, one I have already indicated — leisure. For the first time we shall have a society which devotes the greatest part of its working day not to making money but to spending time. A mad rush to spend time creatively, effectively or even with just plain narcotic effect will dominate a very significant portion of the activities of almost all of American business.

We cannot possibly approach this problem by building another Fontainebleau — another hundred Fontainebleau’s in Miami. The Fontainebleau may well deaden the senses, it doesn’t occupy them. There will be another five million pleasure boats of all kinds on America’s lakes and shoreline, and this will not be adequate to fill the time. The automobiles will back up still faster than we can build roads for them to ride on, and this will not be enough. It’s the search for the constructive use of leisure which will take hundreds of thousands and send them flying on a five-hour trip, 10 years from now, from New York to London, Paris or Rome, with no more thought and less effort than is now involved in getting on Route 17 for a trip to the Catskills.

The world of 1966 will place every kind of new vision and opportunity before the American people. In every home the majesty of color will come out of a television set and will, for a moment, obscure the fact that there aren’t enough individualist thinkers in business any more.

One of the problems of selling will be to overcome the wild drive for sameness. As a matter of fact, selling will confront that problem in a very large measure on its present battlefield. Ten years from now there will be no significant distinction among brands as there is in fact now. All products will be good. What will sell them? Not the product but the salesman . . . his training, his professional skill, his proper know-how, his merchandising capacity, his interest in his customer. And if he doesn’t, we shall fail, because there is no economic law that says: Just because you can turn out 50% more you can sell 50 per cent more.

We will, within these 10 years, have every conceivable component needed to rise to the highest heights civilized man has ever dreamed of in his wildest imagination. We will have all the makings, all the parts and pieces. ?