Meat Poetry about a meat Parade from the Meat Team. What more could you possibly ask for in an ad?

Update: While we’re on the topic of meat, I highly recommend watching This is Hormel. 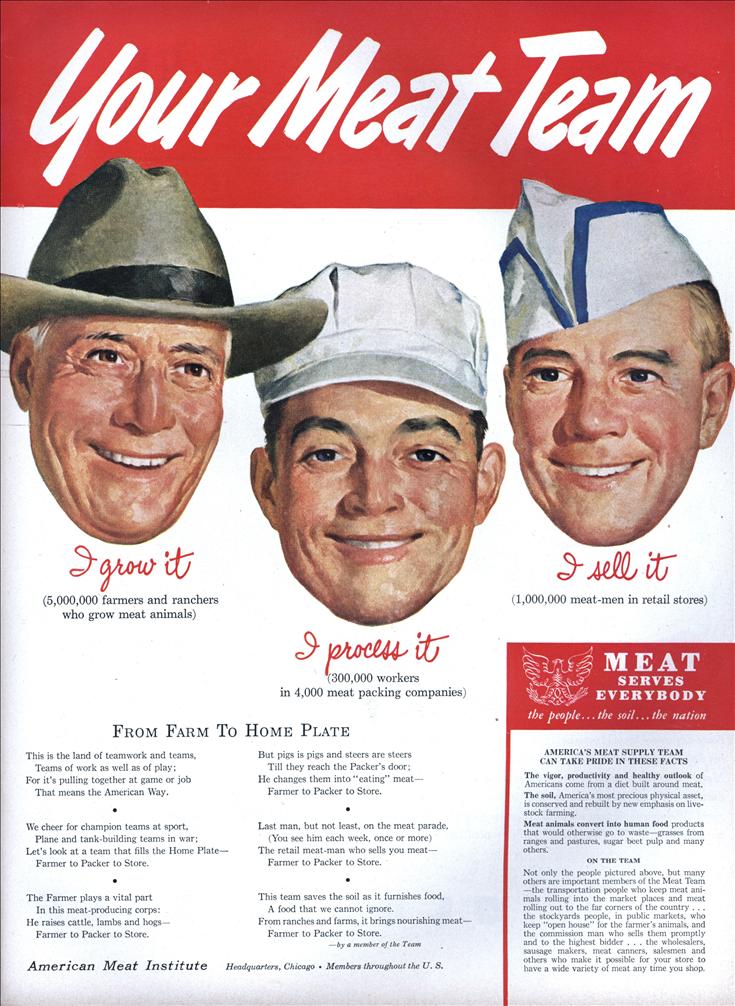 From Farm To Home Plate

This is the land of teamwork and teams,
Teams of work as well as of play;
For it’s pulling together at game or job
That means the American Way.

We cheer for champion teams at sport,
Plane and tank-building teams in war;
Let’s look at a team that fills the Home Plate—
Farmer to Packer to Store.

The Farmer plays a vital part
In this meat-producing corps:
He raises cattle, lambs and hogs-
Farmer to Packer to Store.

But pigs is pigs and steers are steers
Till they reach the Packer’s door;
He changes them into “eating” meat—
Farmer to Packer to Store.

Last man, but not least, on the meat parade,
(You see him each week, once or more)
The retail meat-man who sells you meat—
Farmer to Packer to Store.

This team saves the soil as it furnishes food,
A food that we cannot ignore.
From ranches and farms, it brings nourishing meat—
Farmer to Packer to Store.

—by a member of the Team

MEAT SERVES EVERYBODY
the people… the soil… the nation

AMERICA’S MEAT SUPPLY TEAM CAN TAKE PRIDE IN THESE FACTS

The vigor, productivity and healthy outlook of Americans come from a diet built around meat.

The soil, America’s most precious physical asset, is conserved and rebuilt by new emphasis on livestock farming.

Meat animals convert into human food products that would otherwise go to waste—grasses from ranges and pastures, sugar beet pulp and many others.

Not only the people pictured above, but many others are important members of the Meat Team —the transportation people who keep meat animals rolling into the market places and meat rolling out to the far corners of the country . . . the stockyards people, in public markets, who keep “open house” for the farmer’s animals, and the commission man who sells them promptly and to the highest bidder . . . the wholesalers, sausage makers, meat canners, salesmen and others who make it possible for your store to have a wide variety of meat any time you shop.