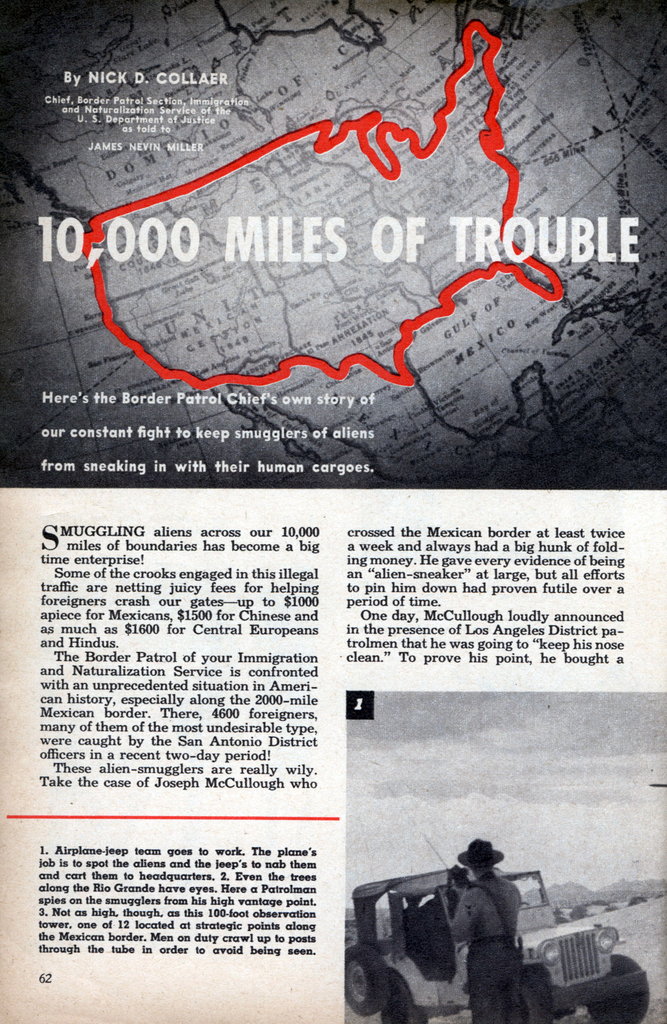 These alien-smugglers are really wily. Take the case of Joseph McCullough who crossed the Mexican border at least twice a week and always had a big hunk of folding money. He gave every evidence of being an “alien-sneaker” at large, but all efforts to pin him down had proven futile over a period of time.

One day, McCullough loudly announced in the presence of Los Angeles District patrolmen that he was going to “keep his nose clean.” To prove his point, he bought a handsome house trailer, complete with kitchen and bedroom and took under his sponsorship a pretty widow with her three-year old child.

From then on, McCullough often was seen crossing the border on “pleasure trips.” Meantime, reports from the north said that groups of six or more Hindus were arriving there from time to time with no legal entry papers. Of course, the officers examined every vehicle; five or six times they stopped the trailer but found nothing. There was one crossing, however, when the picture changed a bit. A friend of Mc-Cullough’s was driving and an inspector got a sudden inspiration to measure the entire trailer. He found an 18-inch difference between the inside and outside sections. So, he snooped a bit farther and finally a coat hanger gave way and a cup-board swung down. There, in a secret compartment, stood six Hindus.

McCullough wasn’t anywhere around. But later it was learned that he had driven ahead in his own car a couple of hours earlier in order to “run the road” for officers. He escaped apprehension for a year but his friend and the widow were jailed and given stiff fines.

Look at a topographical map, excluding only that section between Seattle and Los Angeles. The Border Patrol is spread over 10 major districts covering these areasâ€” six on the Canadian border, three on the Mexican and one covering the southeastern section of the United States, including Florida and the Gulf coast.

Fourteen hundred young officers, carefully selected and trained, stand guard every hour of every day. Operating with aircraft, jeeps, crash boats and even horses, they caught 27,691 undesirable aliens during the last five months of 1948â€”a rate 45 per cent higher than in 1947. In the same period, the number of smugglers of aliens who were arrested was 270â€”an increase of 68 per cent. So you see, our business has been looking up.

Ever hear of human coyotes? American officials just across the border from Juarez report a big increase in the activities of this particularly cunning type of alien-smuggler. They prey on the poor and ignorant. These coyotes
guarantee entry of Mexicans into this country without any risks. A pet trick is to lure the prospective immigrant to the river bank, collect a fat fee and assure the sucker that all he needs to do is wade across. He’s told that he will find friendly guides on the American bank who will pick him up in a truck and carry him to his ultimate destination.

The guides are there, all right. But they’re U. S. officers, delighted to escort the alien to jail as a preliminary to deportation.

Patrolmen engage in numerous gun fights because we deal with smugglers who shoot fast and shoot to kill. We try to halt them by calling out: “Federal officersâ€”halt!” But often by the time the first syllable of the first word is pronounced, we’re fired upon.

Once, the late Lon Parker, Border Patrolman along the Arizona line, came upon a party of three mounted Mexican smugglers. Although he was alone and without a rifle, he emptied his six-shooter at them. Then, facing fire from their carbines, he leaped from his horse and pulled one of the Mexicans out of his saddle.

Parker grabbed the rifle and wounded the other two, one of whom was captured and the other escaped. Later in his career Parker was killed from ambush.

The means by which aliens crash our gates vary greatly. Sometimes it’s a simple transaction of paying the smuggler a few dollars to be put on this side of the border. Other times, it’s an elaborate method by which the alien is provided with a head-tax receipt with forged signature, substituted identification picture and other illegal papers.

During the recent war, Charles A. Levine, once publicized as the first trans-Atlantic air passenger when he accompanied Clarence Chamberlain on his flight to France, figured prominently in a movie-like story of intrigue. It concerned the smuggling of a German man and his wife.

The plan was the brainchild of Peter Josef Walter, a German who had lived here for many years. With the aid of Levine and doctored documents, one of the aliens managed to reach Los Angeles while his wife went to Mexicali, just south of the border. From the proceeds of the husband’s first job, Walter persuaded an auto dealer to sell the alien a new car. Its gasoline tank was removed and a section of the floor was cut away.

Next, the top portion of another car’s gas tank was removed and secured beneath the hole in the floor of the new car. A lid was fashioned to cover the hole and a rubber mat cleverly concealed all alterations.

A small, temporary gas tank was installed under the hood for -actual operation of the smuggling car. And despite a summer temperature of 120 degrees, Walter succeeded in crossing the international boundary line at Mexicali with the German woman hidden under the floor.

Two months after the couple’s illegal entry, both aliens were captured in San Francisco by Immigration and Naturalization officers. In rapid succession both Walter and Levine were apprehended. Levine was convicted of conspiracy to aid aliens to evade the immigration laws. Walter and the German couple pleaded guilty to the criminal charges of illegal entry.

Smuggling aliens by air isn’t new either. As far back as 1927 a ring operating two planes succeeded in landing 70 Chinese aliens in the United States within a period of three months. However, a modern touch was added recently by a man who provided his customers with false documents for entry and then conveyed them from the border to the nearest inland city with an airport. He placed them aboard regular commercial airlines flying inland.

Secret of this fellow’s short-lived success was his foresight in buying a batch of plane tickets in advance and arranging for the aliens to arrive at the airport only a few minutes before the scheduled departure. The confusion of last minute preparations before takeoff made it easy to load his charges aboard the plane. Later, he was caught and convicted.

If you’re interested in the humorous aspects, you’ll find enough screwy Border Patrol anecdotes to fill a book. For instance, a young Marine stationed in China fell in love with a beautiful Oriental girl. When his unit suddenly received shipping orders to return to America, the youth packed his sweetheart, an expectant mother, into a duffel bag and carried her aboard ship. During the entire Pacific crossing the girl hid in a gun storage room.

Upon reaching port, he again crammed her into the duffel bag and hustled ashore. Unfortunately, his fiancee wiggled a bit during the baggage examination and this was the tipoff to a Customs officer who dug her out of the bag. Incidentally, the U. S. attorney who handled the case decided that the ends of justice would not be best served by prosecution.

Aliens who try to crash our borders may be subversive, criminal or even diseased. But, in any event, all are breaking U. S. immigration laws and must be stopped. I can assure you that your Border Patrol is meeting the challenge. Day and night you’ll find us keeping vigil over America’s 10,000 miles of trouble.