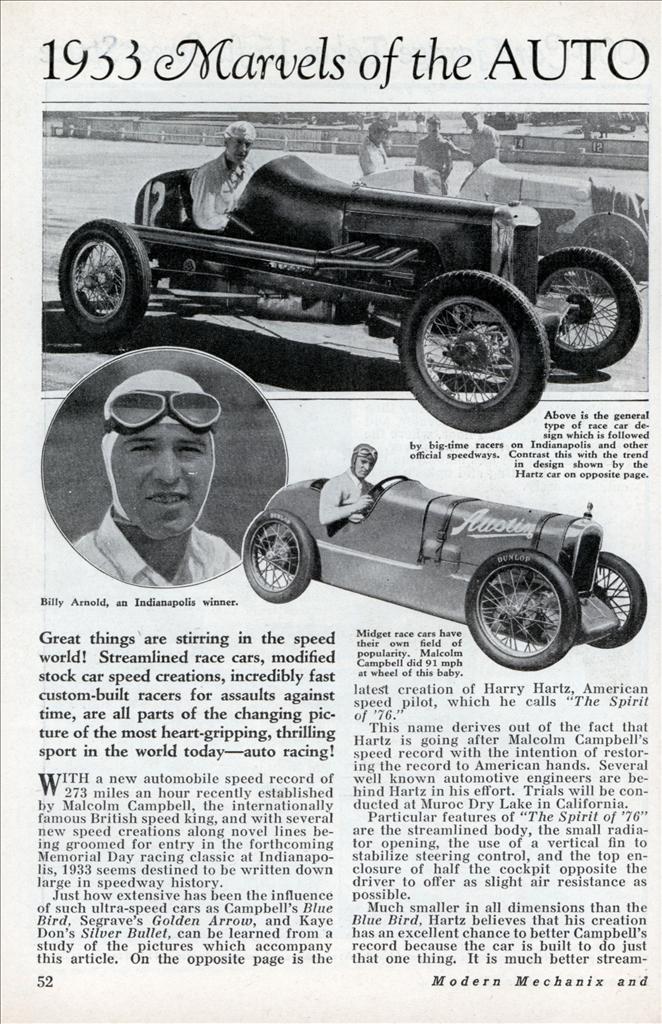 1933 Marvels of the Auto Speed World

Great things are stirring in the speed world! Streamlined race cars, modified stock car speed creations, incredibly fast custom-built racers for assaults against time, are all parts of the changing picture of the most heart-gripping, thrilling sport in the world todayâ€”auto racing!

WITH a new automobile speed record of 273 miles an hour recently established by Malcolm Campbell, the internationally famous British speed king, and with several new speed creations along novel lines being groomed for entry in the forthcoming Memorial Day racing classic at Indianapolis, 1933 seems destined to be written down large in speedway history.

Just how extensive has been the influence of such ultra-speed cars as Campbell’s Blue Bird, Segrave’s Golden Arrow, and Kaye Don’s Silver Bullet, can be learned from a study of the pictures which accompany this article. On the opposite page is the latest creation of Harry Hartz, American speed pilot, which he calls “The Spirit of ’76.”

This name derives out of the fact that Hartz is going after Malcolm Campbell’s speed record with the intention of restoring the record to American hands. Several well known automotive engineers are behind Hartz in his effort. Trials will be conducted at Muroc Dry Lake in California.

Particular features of “The Spirit of ’76” are the streamlined body, the small radiator opening, the use of a vertical fin to stabilize steering control, and the top enclosure of half the cockpit opposite the driver to offer as slight air resistance as possible.

Much smaller in all dimensions than the Blue Bird, Hartz believes that his creation has an excellent chance to better Campbell’s record because the car is built to do just that one thing. It is much better streamlined than the Blue Bird, and has considerably less weight to push.

Because of its wide departure from A.A.A. specifications for speedway racers, it is unlikely that the Hartz machine will take part in the 500-mile Indianapolis race. But unquestionably it foreshadows the trend of race car development.

Auto racing as it now stands falls into three general classesâ€”races of custom-built superspeed cars against time (such as Campbell’s Blue Bird, which develops such terrific speeds that it would be suicidal to race a companion car simultaneously on the same track); races such as the Memorial Day classic, on speedways whose car specifications are rigidly specified by racing associations; and dirt track racingâ€”likewise

controlled, to a certain degree, by associations, but allowing much more latitude to the individual driver.

In this latter field modified stock car racing is at present enjoying much popularity. Usually the races are run on a percentage basis, 40% of the gate receipts being appropriated as prizes. Stock car racing gives the amateur driver a chance to demonstrate his ability, and it is from these races that owners of high-priced racing cars pick the drivers to pilot their machines on the big-time speedways.

Are modified stock cars fast? They most decidedly are. At Funk’s Motor Speedway, Winchester, Indiana, the fastest half-mile dirt track in the country, a Model A 1929 Ford turned one lap just under 26 seconds. Plenty of big time race cars can’t turn in as flashy a performance on the same track.

Since this type of race gives the amateur his best chance, requiring nothing very expensive in the way of equipment, a few details will be given. On the morning of the race day stock cars must qualify for their positions in the race. Usually the ten fastest cars are allowed in the main event, the slower ones in a consolation race which gives them a chance to win some money to defray traveling expenses.

Two 10-mile sprints and a 20 or 30-mile feature race usually comprise the program, with a stunt such as a blindfold race occasionally added. In the latter the driver has a black hood completely covering his head, and he steers his race car entirely by sense of feelâ€”that is, he is so familiar with the race track layout, and can sense position so accurately from the banked turns, that vision is unnecessary. When two blindfold drivers start tearing around the track at the same time, the roaring crowd realizes that it’s looking on a real thrill treat.

A white flag is used to start the regular race. The green flag means the driver is starting the last lap, and the checkered flag is the one the boys all hope for, signifying a winner.

When starting a race the drivers are lined up in the order they qualified for. The fastest qualifying car is the pole car, which leads the pack around the track until they are lined up for a flying start. The first lap is the most dangerous, as each driver strives to get into the turn first. After this lap they scatter out and the nerve tension of the drivers is somewhat relaxed.

In modifying stock cars for racing, all fenders, headlights, windshields, tops, and other parts that would cause resistance are removed. Beyond this, procedure varies with each model car. Valve ports of the engine are usually bored out, special valves and aluminum racing pistons installed, high compression obtained through use of special heads, and downdraft carburetor and oversize manifold added.

Ignition systems usually require some changes. Every driver knows that the magneto system is faster than the usual battery type. A special racing coil, which has a double winding with 30,000 turns, is usually used in conjunction with the double-breaker Mallory distributor. This combination generates a very hot and fast spark which requires a special metric racing spark plug to withstand it.

Special fuels are, of course, required to get the most out of the cars. High test gasoline would burn up the valves, so a special dope is added to regular gas.

Modified stock car racing has penetrated to all parts of the world. The Grand Prix Race at Stockholm, Sweden, traveling over mountains, frozen lakes, and dangerous passages, is run with stock cars. Even in far away Madagascar, an island off the coast of Africa in the Indian Ocean, modified stock car races are held.