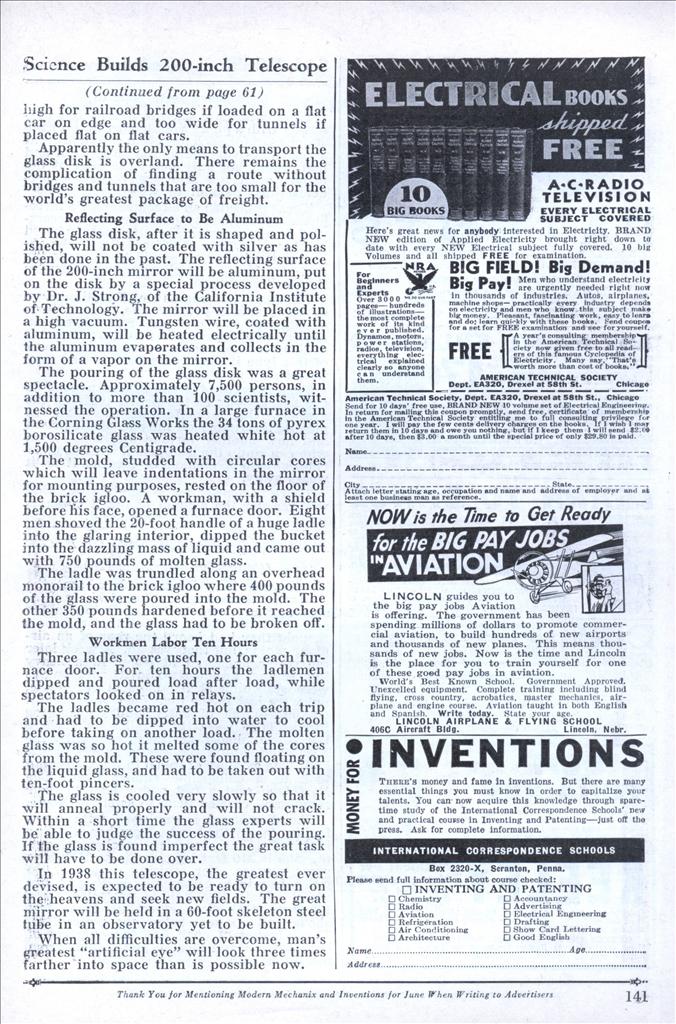 The most complex of these is the shaping of the mirror. To properly reflect and focus light from the stars the mirror of a telescope must have a concave surface that is exactly parabolic. Amateurs feel that they have accomplished much when a six inch mirror is polished and corrected to fractions of an inch after a few days’ work.

The shaping, figuring, polishing, and silvering of the 200 inch mirror will require four years’ time. When it is completed, it will have a concave paraboloid surface true to within two millionths of an inch.

When the mirror is ready, engineers must find means to mount this great disk of glass that is 16 feet 8 inches in diameter and 26 inches thick.

The telescope is of the reflecting type. That is, the light from stars is collected by a huge concave mirror, and focused on a smaller mirror which transmits the light to any eyepiece, where the astronomer or the camera sees the enlarged image. Usually the focal length of a mirror is eight times its diameter. The focal length determines the length of the telescope. A 200-inch mirror would require a telescope more than 130 feet long.

To overcome the engineering problem of mounting and swinging a tube of such great length, the focal length of the great mirror will be reduced to 55 feet, requiring a telescope only 60 feet long.

The popular conception that this great telescope may reveal cities and life on Mars does not interest astronomers. They believe they have proved quite conclusively that human life does not exist on Mars. The 100 inch mirror at Mount Wilson observatory determined that only one-tenth of one percent of oxygen exists in Mars’ atmosphere, not enough to support life.

The purpose of the 200 inch telescope is to gather more light to show the faintest stars, planets and nebulae. The huge “eye” will reach farther into space. It will increase man’s knowledge of the vast voids of the cosmos, in which countless universes whirl on to an unknown destiny. The instrument will be used chiefly for photographic, spectrographic and radiometric work, that will give astronomers a better picture of the minerals and gases existing countless light years away from the earth.

The gigantic telescope will cost $12,000,-000 and will weigh 1,600 tons with its mounting. It will gather about 2,000,000 times more light than the human eye or about four times more than the present largest telescope, the 100-inch instrument of Mount Wilson Observatory.

A great difficulty that still remains to be solved is the transportation of the mirror to the site selected for the telescope. At first the plan was to ship the mirror from Corning, N. Y., to New York city by rail, from New York to Los Angeles, via the Panama Canal, by sea, and then by truck to Pasadena and to the site selected by Mount Wilson astronomers.

The plan had to be abandoned when it was discovered that the mirror will be too high for railroad bridges if loaded on a flat car on edge and too wide for tunnels if placed flat on flat cars.

Apparently the only means to transport the glass disk is overland. There remains the complication of finding a route without bridges and tunnels that are too small for the world’s greatest package of freight.

Reflecting Surface to Be Aluminum The glass disk, after it is shaped and polished, will not be coated with silver as has been done in the past. The reflecting surface of the 200-inch mirror will be aluminum, put on the disk by a special process developed by Dr. J. Strong, of the California Institute of Technology. The mirror will be placed in a high vacuum. Tungsten wire, coated with aluminum, will be heated electrically until the aluminum evaporates and collects in the form of a vapor on the mirror.

The pouring of the glass disk was a great spectacle. Approximately 7,500 persons, in addition to more than 100 scientists, witnessed the operation. In a large furnace in the Corning Glass Works the 34 tons of pyrex borosilicate glass was heated white hot at 1,500 degrees Centigrade.

The mold, studded with circular cores which will leave indentations in the mirror for mounting purposes, rested on the floor of the brick igloo. A workman, with a shield before his face, opened a furnace door. Eight men shoved the 20-foot handle of a huge ladle into the glaring interior, dipped the bucket into the dazzling mass of liquid and came out with 750 pounds of molten glass.

The ladle was trundled along an overhead monorail to the brick igloo where 400 pounds of the glass were poured into the mold. The other 350 pounds hardened before it reached the mold, and the glass had to be broken off.

Workmen Labor Ten Hours Three ladles were used, one for each furnace door. For ten hours the ladlemen dipped and poured load after load, while spectators looked on in relays.

The ladles became red hot on each trip and had to be dipped into water to cool before taking on another load. The molten glass was so hot it melted some of the cores from the mold. These were found floating on the liquid glass, and had to be taken out with ten-foot pincers.

The glass is cooled very slowly so that it will anneal properly and will not crack. Within a short time the glass experts will be able to judge the success of the pouring. If the glass is found imperfect the great task will have to be done over.

In 1938 this telescope, the greatest ever devised, is expected to be ready to turn on the heavens and seek new fields. The great mirror will be held in a 60-foot skeleton steel tube in an observatory yet to be built.

When all difficulties are overcome, man’s greatest “artificial eye” will look three times farther into space than is possible now.