“The improvements in the phonograph have now been carried to such a degree of perfection that the instrument is practically ready for general introduction.” 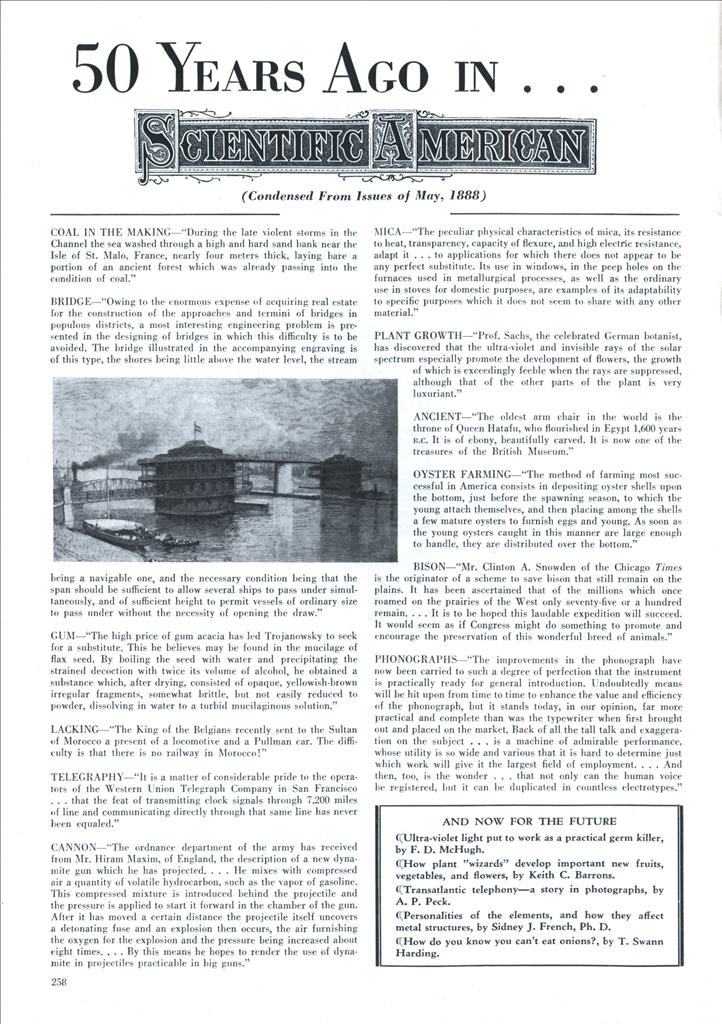 50 Years Ago in… Scientific American

COAL IN THE MAKING—”During the late violent storms in the Channel the sea washed through a high and hard sand hank near the Isle of St. Malo, France, nearly four meters thick, laying hare a portion of an ancient forest which was already passing into the condition of coal.”

BRIDGE—”Owing to the enormous expense of acquiring real estate for the construction of the approaches and termini of bridges in populous districts, a most interesting engineering problem is presented in the designing of bridges in which this difficulty is to be avoided. The bridge illustrated in the accompanying engraving is of this type, the shores being little above the water level, the stream being a navigable one, and the necessary condition being that the span should be sufficient to allow several ships to pass under simultaneously, and of sufficient height to permit vessels of ordinary size to pass under without the necessity of opening the draw.”

GUM—”The high price of gum acacia has led Trojanowsky to seek for a substitute. This he believes may be found in the mucilage of flax seed. By boiling the seed with water and precipitating the strained decoction with twice its volume of alcohol, he obtained a substance which, after drying, consisted of opaque, yellowish-brown irregular fragments, somewhat brittle, but not easily reduced to powder, dissolving in water to a turbid mucilaginous solution.”

LACKING—”The King of the Belgians recently sent to the Sultan of Morocco a present of a locomotive and a Pullman car. The difficulty is that there is no railway in Morocco!”

TELEGRAPHY—”It is a matter of considerable pride to the operators of the Western Union Telegraph Company in San Francisco . . . that the feat of transmitting clock signals through 7,200 miles of line and communicating directly through that same line has never been equaled.”

CANNON—”The ordnance department of the army has received from Mr. Hiram Maxim, of England, the description of a new dynamite gun which he has projected. . . . He mixes with compressed air a quantity of volatile hydrocarbon, such as the vapor of gasoline. This compressed mixture is introduced behind the projectile and the pressure is applied to start it forward in the chamber of the gun. After it has moved a certain distance the projectile itself uncovers a detonating fuse and an explosion then occurs, the air furnishing the oxygen for the explosion and the pressure being increased about eight times. … By this means he hopes to render the use of dynamite in projectiles practicable in big guns.”

MICA—”The peculiar physical characteristics of mica, its resistance to heat, transparency, capacity of flexure, and high electric resistance, adapt it . . . to applications for which there does not appear to be any perfect substitute. Its use in windows, in the peep holes on the furnaces used in metallurgical processes, as well as the ordinary use in stoves for domestic purposes, are examples of its adaptability to specific purposes which it does not seem to share with any other material.”

PLANT GROWTH—”Prof. Sachs, the celebrated German botanist, has discovered that the ultra-violet and invisible rays of the solar spectrum especially promote the development of flowers, the growth of which is exceedingly feeble when the rays are suppressed, although that of the other parts of the plant is very luxuriant.”

ANCIENT—”The oldest arm chair in the world is the throne of Queen Hatafu, who flourished in Egypt 1,600 years B.C. It is of ebony, beautifully carved. It is now one of the treasures of the British Museum.”

OYSTER FARMING—”The method of farming most successful in America consists in depositing oyster shells upon the bottom, just before the spawning season, to which the young attach themselves, and then placing among the shells a few mature oysters to furnish eggs and young. As soon as the young oysters caught in this manner are large enough to handle, they are distributed over the bottom.”

BISON—”Mr. Clinton A. Snowden of the Chicago Times is the originator of a scheme to save bison that still remain on the plains. It has been ascertained that of the millions which once roamed on the prairies of the West only seventy-five or a hundred remain. … It is to be hoped this laudable expedition will succeed. It would seem as if Congress might do something to promote and encourage the preservation of this wonderful breed of animals.”

PHONOGRAPHS—”The improvements in the phonograph have now been carried to such a degree of perfection that the instrument is practically ready for general introduction. Undoubtedly means will be hit upon from time to time to enhance the value and efficiency of the phonograph, but it stands today, in our opinion, far more practical and complete than was the typewriter when first brought out and placed on the market. Back of all the tall talk and exaggeration on the subject … is a machine of admirable performance, whose utility is so wide and various that it is hard to determine just which work will give it the largest field of employment. . . . And then, too, is the wonder . . . that not only can the human voice be registered, but it can be duplicated in countless electrotypes.”