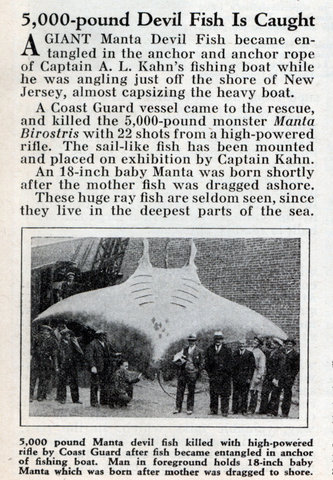 A GIANT Manta Devil Fish became entangled in the anchor and anchor rope of Captain A. L. Kahn’s fishing boat while he was angling just off the shore of New Jersey, almost capsizing the heavy boat.

A Coast Guard vessel came to the rescue, and killed the 5,000-pound monster Manta Birostris with 22 shots from a high-powered rifle. The sail-like fish has been mounted and placed on exhibition by Captain Kahn.

An 18-inch baby Manta was born shortly after the mother fish was dragged ashore.

These huge ray fish are seldom seen, since they live in the deepest parts of the sea.