That is one ugly house of the future. What were they thinking with those slab doors on the third page? “How can I make my house look like a prison?” 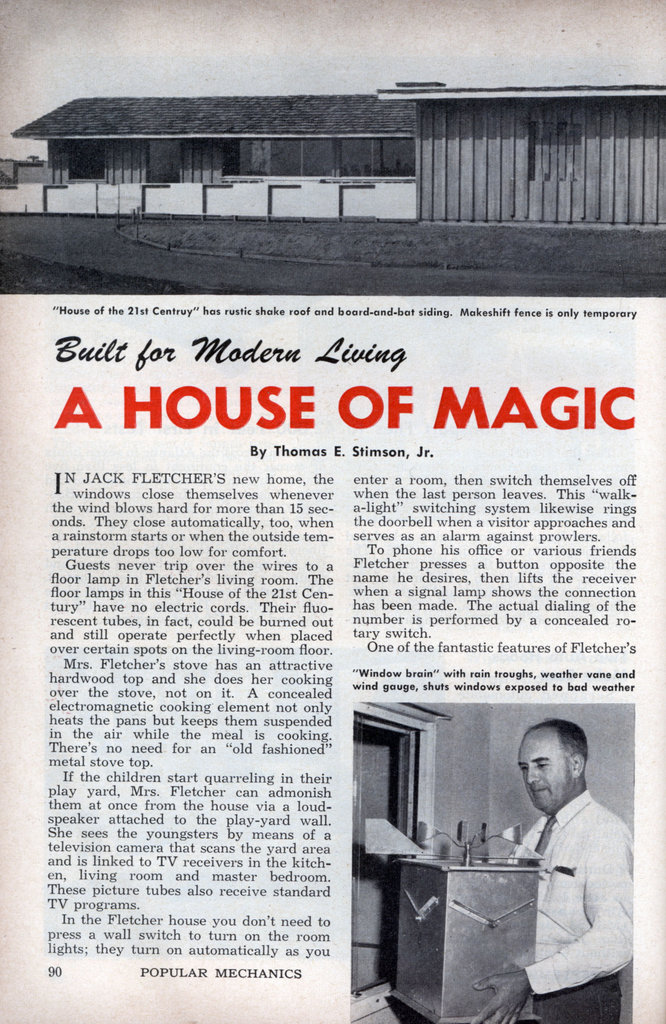 A HOUSE OF MAGIC

IN JACK FLETCHER’S new home, the windows close themselves whenever the wind blows hard for more than 15 seconds. They close automatically, too, when a rainstorm starts or when the outside temperature drops too low for comfort.

Guests never trip over the wires to a floor lamp in Fletcher’s living room. The floor lamps in this “House of the 21st Century” have no electric cords. Their fluorescent tubes, in fact, could be burned out and still operate perfectly when placed over certain spots on the living-room floor.

Mrs. Fletcher’s stove has an attractive hardwood top and she does her cooking over the stove, not on it. A concealed electromagnetic cooking element not only heats the pans but keeps them suspended in the air while the meal is cooking. There’s no need for an “old fashioned” metal stove top.

If the children start quarreling in their play yard, Mrs. Fletcher can admonish them at once from the house via a loudspeaker attached to the play-yard wall. She sees the youngsters by means of a television camera that scans the yard area and is linked to TV receivers in the kitchen, living room and master bedroom. These picture tubes also receive standard TV programs.

In the Fletcher house you don’t need to press a wall switch to turn on the room lights; they turn on automatically as you enter a room, then switch themselves off when the last person leaves. This “walk-a-light” switching system likewise rings the doorbell when a visitor approaches and serves as an alarm against prowlers.

To phone his office or various friends Fletcher presses a button opposite the name he desires, then lifts the receiver when a signal lamp shows the connection has been made. The actual dialing of the number is performed by a concealed rotary switch.

One of the fantastic features of Fletcher’s house is that its fireplaces have no chimneys. The secret is that the flue doubles back down from above the fireplace opening, then runs under the floor to a central chimney in the middle of the house. It’s an old Chinese principle, so ancient that it seems brand new when put to use.

When 23-year-old Jack Fletcher, ex hot-rod and custom-car enthusiast, got ready to build a house for his growing family he decided to make science go to work for him. A lot of well-known scientific principles, he reasoned, can be put to everyday use.

Together with his father, Frank Fletcher, one of the heads of Fletcher Aviation, and with John Scott Campbell of CalTech he set up a laboratory to turn his ideas into realities and to build the equipment for his new house which is in West Covina, Calif.

Electrical gadgets aren’t the only innovations in the house. The Fletchers drew on their aircraft and engineering experience to work out some new basic construction techniques. The result is that Jack Fletcher’s new home is an example of quality construction at relatively low cost.

The house includes three bedrooms and two baths and has a total of 1905 square feet of heated area. Heating is of the electrical radiant type, there being chrome-nickel wire buried in the concrete slab floor. Constructionwise, the house uses a post-and-beam . structural system to support the roof. All walls and partitions thus can be simple nonload-bearing curtain walls built up from short inexpensive lengths of material. The wall panels, in fact, were assembled at a temporary factory instead of on the job. They consist of one-by-six-inch vertical stiffeners nailed to two-by-four horizontal spacers. There are no vertical studs in the ordinary sense. Any scrap lengths of wood as short as 29 inches can be used.

This wall core is erected, then building paper and insulation are added, and finally the exterior and interior wall surfaces are applied. In Fletcher’s home the exterior consists of redwood boards and bats. Wall-board paneling is used in the interior.

Steel-pipe columns support the roof beams. The beams are hollow and are built in accordance with aircraft design. A typical beam may consist of a two-by-six on top, a three-by-six on the bottom with 16-inch-deep walls of one-half-inch plywood and with an internal wood stiffener every eight feet. One of these beams will support a 25-foot span and can be nailed and glued together “by the mile” at less cost than solid timbers. For some shorter spans two-by-fours are used for the top and bottom of the beam.

To provide privacy, light and ventilation in his bedroom Fletcher used slab doors for one exterior wall, the doors being staggered to create a louvered effect. The space between each pair of door panels contains a narrow pane of glass for ventilation.

Patio areas outside the house have louvered roofs that screen out the sun and yet permit air to circulate. The patio-roof boards are set on edge, in slots, and may be removed when winter sunlight is desired.

Fletcher’s self-closing windows are actuated by a “window brain” located on the roof. The brain is actually a metal box with rain-catching channels on each side and with a weather vane and anemometer on top. Inside the box is a bimetallic thermometer. When bad weather strikes, the instruments actuate an electric circuit. Solenoids beneath the windows trip locks to release springs which close the windows.

To operate his cordless floor lamps, Fletcher buried induction coils at various points in his living-room floor. Contained in the base of each floor lamp is a secondary coil. The current flowing between the coils provides enough wattage to fluoresce the gases in the fluorescent tube at the top.

The walk-a-light switching system throughout the house operates on the capacity principle. The presence of a person’s body changes the capacity of a plate

connected to a vacuum-tube circuit. A relay then switches on the lights. The same capacity effect operates the doorbell when a person walks onto the porch. It is used outside the house to operate lights and on a burglar-alarm system.

By the time you read this, Fletcher may have added some other improvements to his house. He and John Campbell are studying the feasibility of an outdoor air conditioner that would keep the large patio areas at comfortable temperatures even on the hottest days. And they are thinking about an invisible ultrasonic screen that would keep flies away.