Mechanix Illustrated
Issue: Jul, 1973
Posted in: Ahead of its time, Automotive
No Comments on A New Switch for Electrics (Jul, 1973) 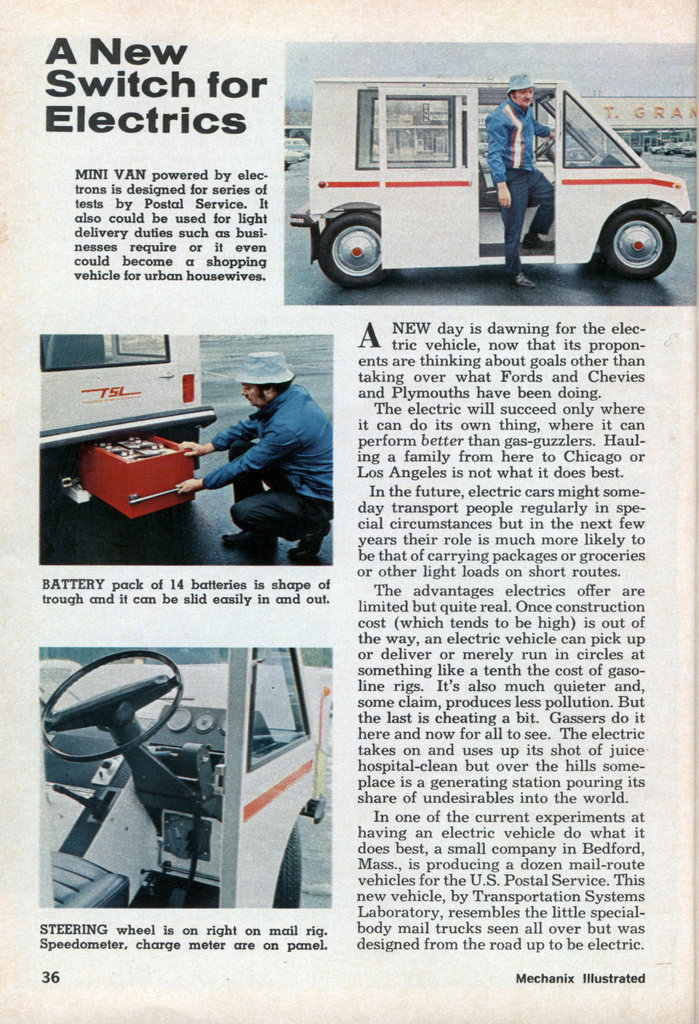 A New Switch for Electrics

A NEW day is dawning for the electric vehicle, now that its proponents are thinking about goals other than taking over what Fords and Chevies and Plymouths have been doing.

The electric will succeed only where it can do its own thing, where it can perform better than gas-guzzlers. Hauling a family from here to Chicago or Los Angeles is not what it does best.

In the future, electric cars might someday transport people regularly in special circumstances but in the next few years their role is much more likely to be that of carrying packages or groceries or other light loads on short routes.

The advantages electrics offer are limited but quite real. Once construction cost (which tends to be high) is out of the way, an electric vehicle can pick up or deliver or merely run in circles at something like a tenth the cost of gasoline rigs. It’s also much quieter and, some claim, produces less pollution. But the last is cheating a bit. Gassers do it here and now for all to see. The electric takes on and uses up its shot of juice hospital-clean but over the hills someplace is a generating station pouring its share of undesirables into the world.

In one of the current experiments at having an electric vehicle do what it does best, a small company in Bedford, Mass., is producing a dozen mail-route vehicles for the U.S. Postal Service. This new vehicle, by Transportation Systems Laboratory, resembles the little special-body mail trucks seen all over but was designed from the road up to be electric.

It’s called the T/3 and, if successful in the mail test, could become a standard deliverer on relatively short routes.

Though several companies still are working on and producing electrics meant for people-carrying, more research dollars now are flowing toward research on electrics as convenience vehicles. The T/3, besides its mail duties, some day could become the suburban housewife’s daytime companion, taking her on shopping trips or to the beauty parlor and carrying home the packages later. Any business with a limited delivery area could make good use of a rig like the T/3.

Transportation Systems Laboratory is one of several companies that have shown interest in putting electrics to work. Volkswagen not long ago took the engine out of a Microbus-based pickup, put in batteries, controls and electric power and . .. presto .. . the Electrobus.

More than 50 utility companies in an association connected with the Electric Vehicle Council have ordered more than 100 electric vans which will be used for delivery, repair work and possibly meter-reading gangs. Like the VW experiment, this project has to do with converting rigs designed for gasoline into electrics. The utility job is being done by Battronic of Boyertown, Pa., who has produced special bodies for years. . The TSL T/3 has many of the simplicities required by electric power, being designed specifically for batteries. Its weight without batteries is a modest 2,100 lbs. A battery pack of 14 6-volt batteries adds 900 lbs. The carrying capacity of 700 lbs. is not likely to scare Mack or International but it’s sufficient for light delivery duties.

The 20-hp motor drives forward into a transmission in the front axle. Front drive in this case leaves a space down the middle for the battery pack.

We found the T/3 to have quick steering, easy handling and generally pleasing performance as a mini van. It can get away from traffic lights with the rest of the pack and, with a top speed of 42 mph, it can run with the best of them on local streets. On high-speed boulevards and freeways, the T/3 would be lost. As with other electrics, it must stay in a world where it is equal or even superior.

TSL claims 35 mi. from a single charge, which fits in with the life of the average mail carrier. His route, statistics say, is only 12 mi. long. Most housewives drive much less than 35 mi. a day. So in special circumstances, the electric may yet find its own thing.