American Magazine
Issue: Oct, 1932
Posted in: Animals For Profit, Aviation, Other Animals
Tags: hunting
1 Comment on A New Way of Keeping the Wolf from the Door (Oct, 1932) 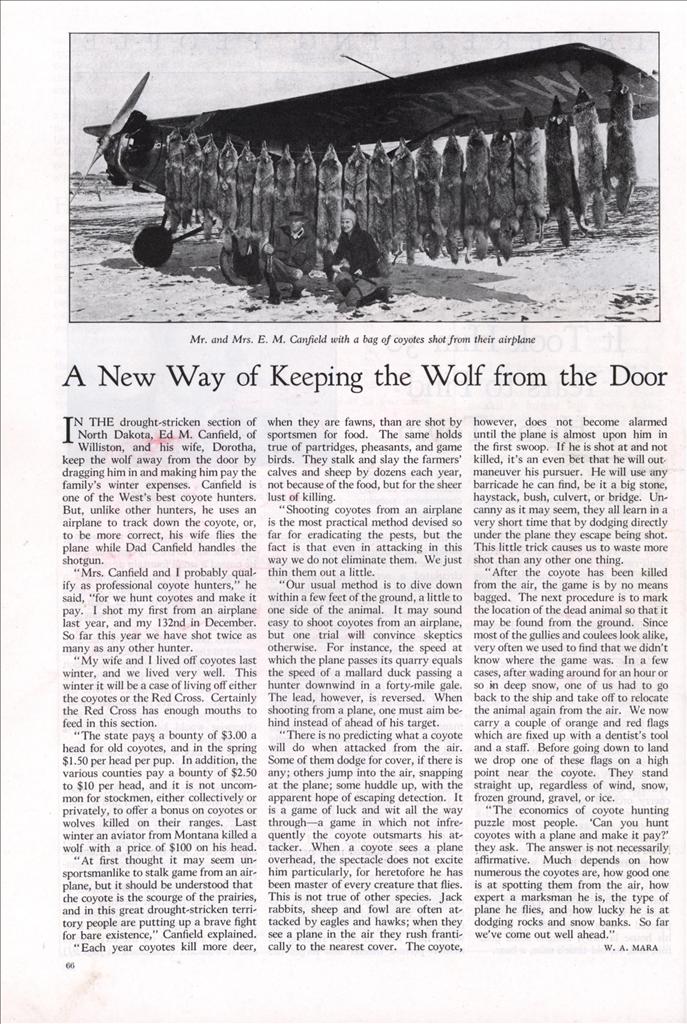 A New Way of Keeping the Wolf from the Door

IN THE drought-stricken section of North Dakota, Ed M. Canfield, of Williston, and his wife, Dorotha, keep the wolf away from the door by dragging him in and making him pay the family’s winter expenses. Canfield is one of the West’s best coyote hunters. But, unlike other hunters, he uses an airplane to track down the coyote, or, to be more correct, his wife flies the plane while Dad Canfield handles the shotgun.

“Mrs. Canfield and I probably qualify as professional coyote hunters,” he said, “for we hunt coyotes and make it pay. I shot my first from an airplane last year, and my 132nd in December. So far this year we have shot twice as many as any other hunter.

” My wife and I lived off coyotes last winter, and we lived very well. This winter it will be a case of living off either the coyotes or the Red Cross. Certainly the Red Cross has enough mouths to feed in this section.

“The state pays a bounty of $3.00 a head for old coyotes, and in the spring $1.50 per head per pup. In addition, the various counties pay a bounty of $2.50 to $10 per head, and it is not uncommon for stockmen, either collectively or privately, to offer a bonus on coyotes or wolves killed on their ranges. Last winter an aviator from Montana killed a wolf with a price of $100 on his head.

“At first thought it may seem unsportsmanlike to stalk game from an airplane, but it should be understood that the coyote is the scourge of the prairies, and in this great drought-stricken territory people are putting up a brave fight for bare existence,” Canfield explained.

“Each year coyotes kill more deer, when they are fawns, than are shot by sportsmen for food. The same holds true of partridges, pheasants, and game birds. They stalk and slay the farmers’ calves and sheep by dozens each year, not because of the food, but for the sheer lust of killing.

“Shooting coyotes from an airplane is the most practical method devised so far for eradicating the pests, but the fact is that even in attacking in this way we do not eliminate them. We just thin them out a little.

“Our usual method is to dive down within a few feet of the ground, a little to one side of the animal. It may sound easy to shoot coyotes from an airplane, but one trial will convince skeptics otherwise. For instance, the speed at which the plane passes its quarry equals the speed of a mallard duck passing a hunter downwind in a forty-mile gale. The lead, however, is reversed. When shooting from a plane, one must aim behind instead of ahead of his target.

“There is no predicting what a coyote will do when attacked from the air. Some of them dodge for cover, if there is any; others jump into the air, snapping at the plane; some huddle up, with the apparent hope of escaping detection. It is a game of luck and wit all the way through—a game in which not infrequently the coyote outsmarts his attacker. When a coyote sees a plane overhead, the spectacle does not excite him particularly, for heretofore he has been master of every creature that flies. This is not true of other species. Jack rabbits, sheep and fowl are often attacked by eagles and hawks; when they see a plane in the air they rush frantically to the nearest cover. The coyote, however, does not become alarmed until the plane is almost upon him in the first swoop. If he is shot at and not killed, it’s an even bet that he will out-maneuver his pursuer. He will use any barricade he can find, be it a big stone, haystack, bush, culvert, or bridge. Uncanny as it may seem, they all learn in a very short time that by dodging directly under the plane they escape being shot. This little trick causes us to waste more shot than any other one thing.

“After the coyote has been killed from the air, the game is by no means bagged. The next procedure is to mark the location of the dead animal so that it may be found from the ground. Since most of the gullies and coulees look alike, very often we used to find that we didn’t know where the game was. In a few cases, after wading around for an hour or so in deep snow, one of us had to go back to the ship and take off to relocate the animal again from the air. We now carry a couple of orange and red flags which are fixed up with a dentist’s tool and a staff. Before going down to land we drop one of these flags on a high point near the coyote. They stand straight up, regardless of wind, snow, frozen ground, gravel, or ice.

“The economics of coyote hunting puzzle most people. ‘Can you hunt coyotes with a plane and make it pay?’ they ask. The answer is not necessarily affirmative. Much depends on how numerous the coyotes are, how good one is at spotting them from the air, how expert a marksman he is, the type of plane he flies, and how lucky he is at dodging rocks and snow banks. So far we’ve come out well ahead.”