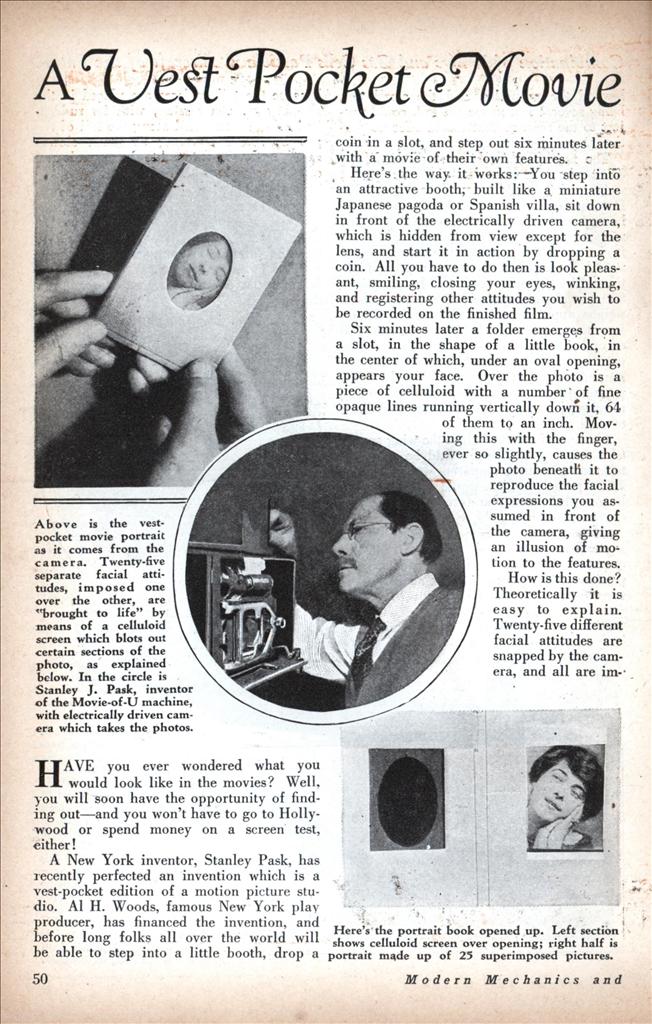 A Vest Pocket Movie Of Yourself

New drop-a-coin camera turns out portraits which wink and smile.

HAVE you ever wondered what you would look like in the movies? Well, you will soon have the opportunity of finding out—and you won’t have to go to Hollywood or spend money on a screen test, either!

A New York inventor, Stanley Pask, has recently perfected an invention which is a vest-pocket edition of a motion picture studio. Al H. Woods, famous New York play producer, has financed the invention, and before long folks all over the world will he able to step into a little booth, drop a coin in a slot, and step out six minutes later with a movie of their own features. Here’s the way it works: You step into an attractive booth, built like a miniature Japanese pagoda or Spanish villa, sit down in front of the electrically driven camera, which is hidden from view except for the lens, and start it in action by dropping a coin. All you have to do then is look pleasant, smiling, closing your eyes, winking, and registering other attitudes you wish to be recorded on the finished film.

Six minutes later a folder emerges from a slot, in the shape of a little book, in the center of which, under an oval opening, appears your face. Over the photo is a piece of celluloid with a number of fine opaque lines running vertically down it, 64 of them to an inch. Moving this with the finger, ever so slightly, causes the photo beneath it to reproduce the facial expressions you assumed in front of the camera, giving an illusion of motion to the features.

How is this done? Theoretically it is easy to explain. Twenty-five different facial attitudes are snapped by the camera, and all are imposed over each other on a single photo print, which is marked off with a number of vertical lines which conform with those on the piece of celluloid. Moving the celluloid screen thus blots out certain parts of the picture, which are in turn brought out when the screen is moved further along. Like a moving picture, which is made up of a succession of “stills,” it is the rapidity with which each picture follows on its predecessor which gives the effect of motion to the eye.

In practice, the main difference between the pocket movie and the full-size brand is that the miniature uses a celluloid screen to “mesh” with different poses of the picture, thus presenting them in succession to the eye, while the large machines project the individual poses on a screen by means of lights and lenses.

Before perfecting his camera, which is called the “Movie-of-U,” Inventor Pask spent two years perfecting the harmony of screens which is the secret of his machine. Just as he was on the point of completing his invention, Mr. Woods heard of it and became so interested in its possibilities that he was instrumental in forming the corporation which is now marketing Pask’s machine. It is calculated that the machine will gross $90 an hour in receipts when properly located.

Already several units have been installed at Coney Island, Niagara Falls, and numerous other resorts throughout America. At this writing the Argentine rights have been sold, and negotiations are under way for sale of Mexican and Cuban rights.

Several theatres have sent in orders for machines to be placed in their lobbies. All of which helps to prove that there are still millions to be made by a man with an idea!