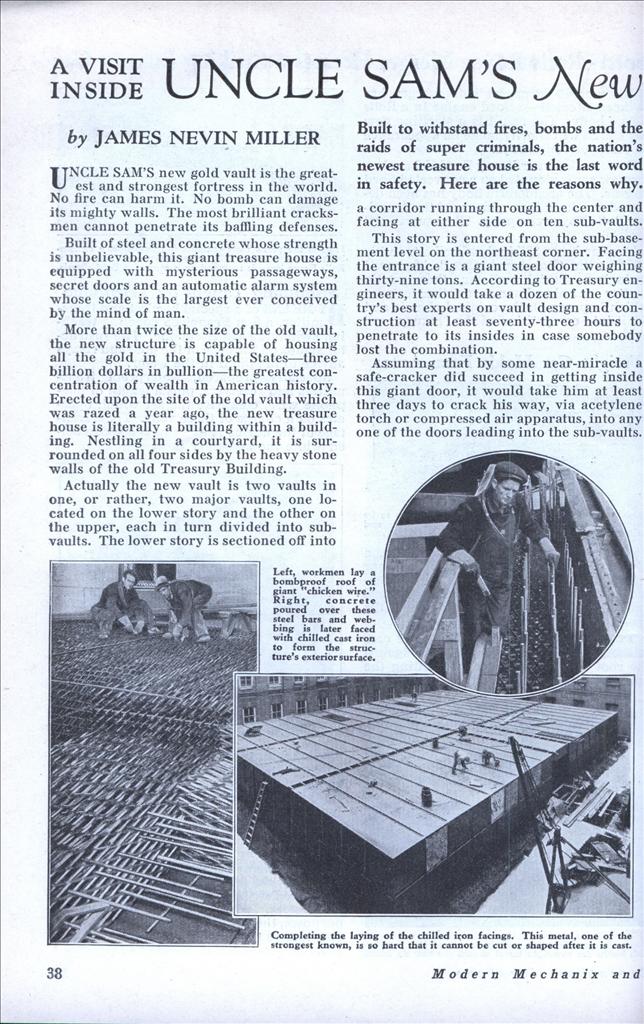 Built to withstand fires, bombs and the raids of super criminals, the nation’s newest treasure house is the last word in safety. Here are the reasons why.

UNCLE SAM’S new gold vault is the greatest and strongest fortress in the world. No fire can harm it. No bomb can damage its mighty walls. The most brilliant cracksmen cannot penetrate its baffling defenses.

Built of steel and concrete whose strength is unbelievable, this giant treasure house is equipped with mysterious passageways, secret doors and an automatic alarm system whose scale is the largest ever conceived by the mind of man.

More than twice the size of the old vault, the new structure is capable of housing all the gold in the United Statesâ€”three billion dollars in bullionâ€”the greatest concentration of wealth in American history. Erected upon the site of the old vault which was razed a year ago, the new treasure house is literally a building within a building. Nestling in a courtyard, it is surrounded on all four sides by the heavy stone walls of the old Treasury Building.

Actually the new vault is two vaults in one, or rather, two major vaults, one located on the lower story and the other on the upper, each in turn divided into sub-vaults. The lower story is sectioned off into a corridor running through the center and facing at either side on ten sub-vaults.

This story is entered from the sub-basement level on the northeast corner. Facing the entrance is a giant steel door weighing thirty-nine tons. According to Treasury engineers, it would take a dozen of the country’s best experts on vault design and construction at least seventy-three hours to penetrate to its insides in case somebody lost the combination.

Assuming that by some near-miracle a safe-cracker did succeed in getting inside this giant door, it would take him at least three days to crack his way, via acetylene torch or compressed air apparatus, into any one of the doors leading into the sub-vaults.

Each of these latter, by the way, has only one lock; but the door will not open unless two keys are used. These will be carried, it is understood, by two separate guards. Assuming that both these men lost their keys there’s a secret emergency entrance to each sub-vault, known only to a chosen handful of Treasury executives.

When the main vault is put into actual use, guards will patrol the corridor night and day. Every sub-vault is air-conditioned and equipped with what is believed to be the most efficient automatic alarm system ever known. Details are naturally not available to the public, but it is understood that if any person so much as touches a door outside of office hours, an alarm will immediately bring secret service operatives and police to the scene instantly.

This lower vault, or story, is almost an exact square, 123 feet by 112 feet. The ceiling is 10 feet high and each sub-vault is 22.6 feet by 49 feet. Somewhat smaller in length and width is the upper story. Instead of ten sub-vaults it has only six. Each is equipped for storing securities, currency or coin, as the emergency may arise.

Every piece of major equipment in this upper vault is exactly like that in the lower vault, including the thirty-nine ton entrance door, the corridor down the middle and the unique automatic alarm system. The only substantial difference is that on top of this vault will be built a concrete roof two feet six inches high.

Immediately underneath the lower vault is located what is unquestionably the strangest subterranean passageway ever constructed in modern times. Made of strongest concrete, it has a ceiling only six and a half feet high. The entire section is composed of what are termed “intersecting inspection ports.” These ports, spaced at intervals of about two and a half feet, are simply upraised chunks of concrete reaching to the average man’s shoulder. Each one contains a reflecting light, situated so that at any given moment an inspector can see the entire length and breadth of the sub-basement. Thus, in case an unauthorized person has somehow sneaked into the basement and is noted by the inspector, the latter simply picks up one of these lamps, ingeniously shaded so that he can see the interloper without in turn being seen, and determines his exact location. The guard then starts the automatic alarm system by simply touching one of the doors opening into any one of the sub-vaults which promptly brings secret service men to the scene.

Storing Untold Wealth The amount of money that can be stored in this treasure fort reaches a staggering figure. The old vault had space for 472,000,000 separate pieces of paper currency, ranging in value from one to ten thousand dollars. In hard coin the former structure had space for about $11,000,000 in gold, 47,624,000 standard silver dollars and about $28,000 in small change. More than double these amounts can be accommodated in the new vault.

Besides serving as the largest money chest ‘ in the world, the new vault will also be used as an “aging cellar” for new paper money. In order that ink may dry completely, new currency must undergo an aging process which lasts about six months. The former vault had insufficient space for lengthy storage; hence, bills were issued “green” and consequently wore out rapidly.

According to James D. Owens, Treasury construction engineer, only thirty days were required to wreck the old vault, whereas it would require almost a year to destroy the new one.

Mr. Owens goes on to explain that the specially hardened iron on the outside of the upper and lower vaults is so tough that after it is cast no holes can be bored into it, nor can it be shaped or cut. All the holes, special fillings and shapes were cast when the iron slab was cast, ready to fit into place.

The walls are filled with concrete, reinforced with material which resembles giant “chicken wire.” A burglar tunneling in from below would have to penetrate six and one half feet of concrete and steel in the floor.

Last Word in Fireproofing More fireproof than any other modern structure conceived by man is the way engineers describe the treasure chest. They point out that aside from the stored money and securities there just isn’t anything connected with the vault that will burn. Nor can the vault be successfully bombed. The resiliency of the steel webbing described above will prevent the slightest structural damage.

Crook-proof, fireproof and bomb proof, Uncle Sam’s new gold vault is a remarkable tribute to modern construction engineers. It is expected to stand as a monument to their ability for at least 200 years to come.