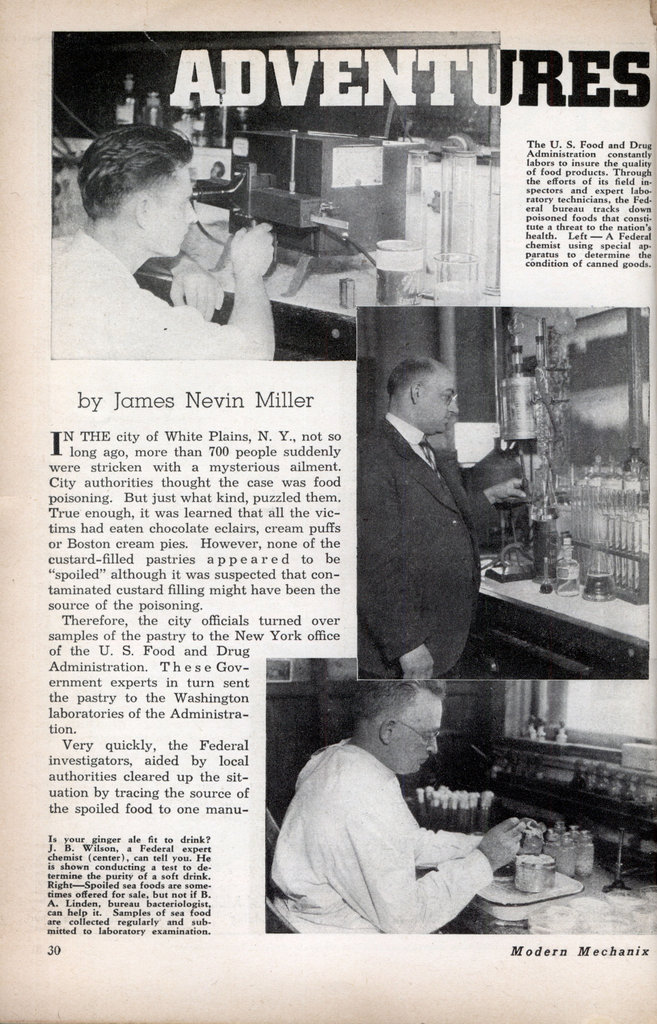 ADVENTURES of the POISON SQUAD

IN THE city of White Plains, N. Y., not so long ago, more than 700 people suddenly were stricken with a mysterious ailment. City authorities thought the case was food poisoning. But just what kind, puzzled them. True enough, it was learned that all the victims had eaten chocolate eclairs, cream puffs or Boston cream pies. However, none of the custard-filled pastries appeared to be “spoiled” although it was suspected that contaminated custard filling might have been the source of the poisoning.

Very quickly, the Federal investigators, aided by local authorities cleared up the situation by tracing the source of the spoiled food to one manu- facturing bakery in Westchester County, seizing and destroying all shipments sent out on the same day as the food poisoning outbreak, and identifying the deadly bacteria that caused the large-scale illness.

Thrills are commonplace to these health sleuths, who are known unofficially as Uncle Sam’s “Poison Squad.” Their job is to guard the safety of your pantry by tracking down, armed with ingenious laboratory and field methods, outstanding cases where moldy fruits and vegetables, contaminated sea foods, spoiled canned goods, and doubtful-looking imported edibles offer a serious menace to the health of the nation.

Just a few of the Poison Squad’s recent achievements, besides the settlement of the poisoned pastry case, include: the rounding up, during a three months period, of nearly a quarter million shipping cases of canned salmon, an appreciable percentage of which was spoiled; the investigation of a food poisoning outbreak in Philadelphia somewhat similar to the one at White Plains; and the discovery of the cause of a strange “epidemic” of the parasitic disease known as trichinosis, at Williamsville, N. Y.

Seizure of poisonous, decomposed or filthy foods is like stopping a murderer’s bullet in flight, says Dr. A. C. Hunter, chief bacteriologist of the Poison Squad. Oftentimes such seizure has been criticized as only a worthless gesture that may be compared to the arrest of a murderer’s revolver after it has slain its victim. Dr. Hunter does not agree. He says it is better to protect the public health by confiscating dangerous foods before they can cause injury than it is to prosecute after the damage is done. Seizure is the prompt and effective weapon which is the first reliance of the Food and Drug Administration.

Were it not for the vigilance of the Poison Squad your family right now might be eating apple butter or apple jelly containing lead or arsenic. Recently a jury, after studying a thorough investigation by the Federal food sleuths, found a big fruit company in the state of Washington guilty of a violation of the Food and Drugs Act in shipping interstate stocks of apple scrap which contained residues of poisonous lead and arsenical sprays. About 46,000 pounds of the scrap had been seized by the undercover men assigned to the case.

Surprisingly enough, nearly one-third of the time, money and effort expended by Uncle Sam’s food policemen is being devoted to protecting the public from the danger of poisons used in sprays to combat insect pests and diseases that attack fruits and vegetables. Every year thousands of carloads of fruits and vegetables are given painstaking laboratory examination to detect traces of such health-destroying residues. However, many of the states are cooperating and the situation is improving rapidly from year to year, officials say.

But, to complete the story about the White Plains poisoned pastry case. Aided by local health officers, the Federal food sleuths, as mentioned earlier, traced the source of the spoiled food to a single manufacturing bakery in Westchester County and rounded up and destroyed all shipments sent out on the same day as the food poisoning outbreak.

Meantime New York agents of the Food and Drug Administration made a thorough inspection of the bakery that made the pastry and found not a single trace of any unsanitary conditions. To this day the case is somewhat enshrouded in mystery, but it is believed by the Government scientists that the cream-filled pastry became poisonous mainly because it became unduly exposed to warm temperatures without proper refrigeration.

This outbreak and many other somewhat similar ones emphasizes that cream-filled pastries, since they are ideal for the growth of bacteria, should be produced, handled and refrigerated with extraordinary care if they are to be held any length of time before consumption.

A good many months ago New York City members of the Poison Squad tracked down 15 cases of the parasitic disease known as trichinosis, at Williamsville, N. Y. The outbreak, like others occurring in the United States, was traced to the eating of raw, or improperly cooked pork that was infested with the parasite known as Trichinae. Although 8 of the 15 persons affected were confined to hospitals, no deaths were reported. This fact is attributed to the prompt action of the Federal health sleuths, aided by Dr. Myron Metz, local health officer, who obtained a list of the buyers of the infected pork and advised each person to call a physician in case he felt sick.

A case of food poisoning in North Dakota, in which 12 persons died from eating home-canned peas, has prompted the United States Department of Agriculture to call attention again to a method of canning non-acid vegetables in the home to guard against the deadly botulinus poison.

In the canning of non-acid vegetables—peas, asparagus, beans, corn, beets, and spinach—the only safe course is to destroy all bacteria that may be present by canning under steam pressure, according to the Bureau of Home Economics. In the case of acid vegetables and fruits, such as tomatoes, apples, peaches, and gooseberries, the bacteria are killed at boiling temperature (212° F.) but with non-acid vegetables there is no assurance that the botulinus organisms will be killed by processing in boiling water unless the material is heated for six hours or longer. Obviously, a 6-hour treatment of peas or similar vegetables would result in a very unattractive product. A much shorter heating time is required at a temperature of 240° or 250° F., such as may be obtained in a pressure cooker.