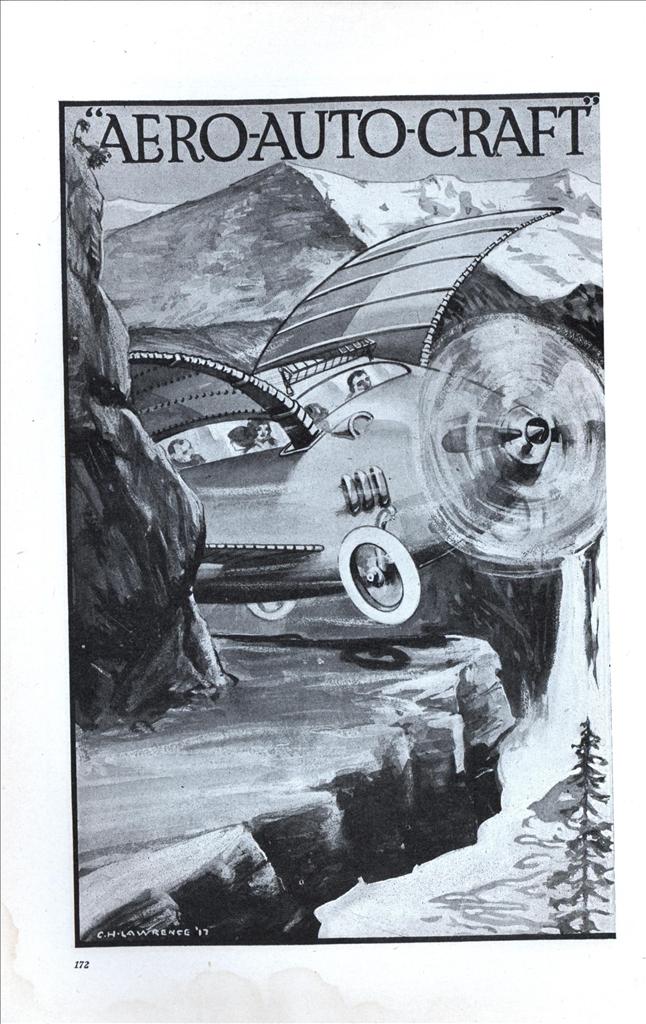 This is not the prediction of a dreamer, but the logical development of present clay tendencies. With the memory of Morse’s first forty miles of line less than a hundred years ago and comprehension of the network of cables and wires which enmesh the earth today—with recollection of Bell’s toy in the Philadelphia Centennial, and a long distance call three thousand miles long an accomplished fact forty years after—recalling Edison’s first inefficient electric light, now lost in the dazzling rays of the present day electrical illumination—is it hard to believe that the motor car of today, a fact—the aeroplane of today, another fact—the motor boat of today, a third fact, may be—nay, must be, combined to form the universal vehicle of the not far-distant future?

Already the aeroplane and the motor boat have coalesced. We had hydroplanes before aeroplanes, although hydroplane meant then only a motor boat which rode on, rather than in, the water. The flying boat—or hydroaeroplane, as it is called—which can soar or swim is an everyday fact in 1917. What more logical than the addition of the automobile, that the three modes of travel known to man may be combined ?

To visualize the product is not especially difficult; even its structure and details can be supposed with but a minimum chance of error.

The body will be a combination of the lines we now know only in separate entities. It will have the enclosed glass top of the pleasure car, the stream lines of the best yachting practice, and the lightness and strength of the aeroplane fuselage. Attached to the top will be a pair of not too large monoplane wings from which will be evolved a nose or prow, which streams into the body. On either side of this prow will be hinged pressure rudders, designed to swing outward. If the one on the right is pushed forward, even a little, air resistance will be increased and the craft will swing to that side. Elevation and depression in the air will be managed by tilting the monoplane wings, exactly as in the aeroplanes of today.

In the water, the planes will be tilted just enough to make the aeroautocraft ride high in the waves. Steering, whether in the water, on the land, or in the air, will be controlled always by the vane rudders forward. For land travel the aeroautocraft will have four wheels also, to be used for alighting from the air, or for crawling out of the water on to a difficult beach. These will be infinitely lighter and probably smaller than familiar automobile wheels. They will be subject to comparatively little stress, because at speed on land, the wings will take most of the weight from them. Moreover, the wheels will be mounted on elevating arms, so that the touch of a button in the driver’s reach will swing them up and out of the way when a water expedition is in prospect.

As the wheels are for support and rolling only, and have no steering or power function, this is a mechanical possibility about the feasibility of which there scarcely can be any discussion.

It is possible that the front wheels may be mounted upon the familiar steering knuckles, at least on those aeroautocraft which are to be used in city traffic, in order to provide for easy steering at very low speeds. Ordinarily, mechanical steering will be unnecessary. All that will be necessary to turn a corner will be the slight elevation of the monoplane edge, the touch of the button which pushes forward the right resistance vane, and the consequent swinging of the whole vehicle, the front wheels an inch or so in the air, about any corner or turn in the road.

Propulsion for all three modes of travel will be effected by an aerial propeller in front. More effective design of propeller blades, the possibility of super-speed and all the power needed, will increase the efficiency of the aerial propeller’s pull and at the same time decrease its noise. Moreover, by the elimination of all differentials, gear-boxes, heavy gasoline motor and the heavy rigid steel chassis of the present cars, a degree of lightness will be attained which will make aerial propulsion more efficient than present rear wheel traction. The aero- autocraft will know neither hills nor skidding, and the principal talking point will be, not the grades it can climb, but the minimum coasting angle at which it will descend with the power shut off.

The aeroautocraft will have no gas, water or oil tanks, 110 gasoline motor, starter, gear shift or steering wheel! A lapboard attached to a flexible cable, will place a series of buttons in front of the operator, who will control every action of his means of transportation with a finger touch.

The present trouble makers on aeroplanes, boats and automobiles will be no more. There will be no brake in the future—the two steering vanes together will stop the aeroautocraft in two lengths. There will be nothing to oil, save a few ball bearings twice a year. Tires will wear for thousands of miles,—probably fifty to a hundred—because they will get so little wear. There will be no such thins: as traffic congestion in cities, because streets will be used only for landing and starting—travel will be overhead !

There will be no speed laws—instead, there will be speed levels, the slower near the ground, the faster ones higher up. And lastly, there will be no accidents, save such as are clue to faulty construction of the aeroautocraft itself, for, 110 matter how many may flit through the air, there will be room, always, up above!

Structurally, the aeroautocraft will be light, but strong. It will have a steel-braced aluminum frame, unless some method of tempering aluminum to the strength of steel be found. But because it will have the minimum of machinery and avoid the road shocks and stresses which the present automobile must withstand, it will not need to have the weighty and massive strength of the chassis of today. Its body will be weather-tight, of course, and its conveniences remarkable in their simplicity. It will not look inside, like the engine room of a U-boat, but like a pleasure house. Nor will it be difficult to drive, for automatic stabilizers—a fact today—will prevent upsets, and as power failure will be impossible, danger will be nil.

Power? Electricity! The propeller will be driven with a light electric motor of sufficient capacity to do anything demanded.

And the source of the current which the motor uses will be falling water!

In the age when this aeroautocraft dots the landscape, rides the lakes and rivers and darts through the air, every waterfall ‘in the land—indeed, every waterfall the world over—will be harnessed, and will deliver wireless power to the ether. Whoever will, may tap this constant stream of power, and use it as much, as often, and as long as he likes. Unquestionably the use will be limited by law, and a fee paid by every operator of any wireless power craft, proportioned to the size of his motor. But because the stream of power will be constant, there can be no circumscribing a journey by time, distance or lack of supplies.

If the reader has followed this prediction to this point without finding any impossibility in the proposed structure, let him not lay down this article in disgust merely because while we have automobiles, motor boats and aeroplanes, we have not, as yet, wireless power. Let him recall the enthusiastic ridicule given Marconi when he proposed wireless messages from continent to continent, and the nonchalance with which these same sceptics read their wireless-informed newspaper on shipboard or sell stocks in London via wireless from New York, today. Let him remember that it was mathematically demonstrated that a heavier-than-air mechanism never could fly—but it does! Let him recall the famous prediction of a world-renowned scientist, before a scientific congress, that “it was axiomatic that man could never know the composition of stars or sun because he couldn’t get to them, or them to him.” Then came Fraunhoffer, the spectroscope, and now we know as much about what composes the most distant stars as we do about what composes the earth!

But if it appeals as a poor argument that because the impossibility of one year is the fact of the next, let him consider this fact. We already transmit power by wireless—wireless telegraphy and telephony were otherwise impossible.

When it is demonstrable that nature can accomplish anything, it is reasonable to suppose that man can accomplish the same thing. For years the argument “well, birds fly, but man can’t” was the answer to this. It is so no longer. And if nature can show us that power—vast, irresistible, boundless power, is conveyed through the ether, there is nothing whatever unthinkable in the idea that we can learn to transmit power through the ether. Heat—which is power—comes to us in unthinkable amount, via the ether.

Is wireless-power, man made, so unthinkable?

The aeroautocraft of the future will have a wireless power receiver upon the upper surface of the monoplane and will draw its ability to fly, to run, to swim, from the power currents sent out from countless central stations, very much as the trolley car of today takes its power from its central station anywhere on its line. The difference will come in the elimination of the wire!

Is it hard to conceive? If so, it is because of the habit of thought which makes what isn’t harder to comprehend than what is. If it were possible to bring any of the great and intelligent thinkers of the past, back to the present—Plato or Hero or Socrates or Euclid, and ask him which he would consider more difficult— to project the human voice through the air a hundred miles, or power to lift a man’s weight or kill a dog through the same distance—what would he answer? If you told him he might accomplish both with or without a single strand of fine wire strung on poles, would it alter his inability to answer by so much as a single thought ? Of course not! But today we know power is transmitted only mechanically, by belts, or electrically, over wires, and never think that to send ten thousand horsepower through two slender copper cables is no whit less astonishing than to send the same through the ether!