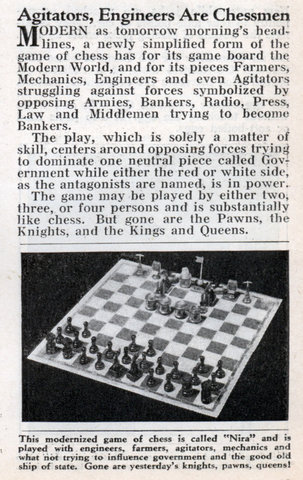 MODERN as tomorrow morning’s headlines, a newly simplified form of the game of chess has for its game board the Modern World, and for its pieces Farmers, Mechanics, Engineers and even Agitators struggling against forces symbolized by opposing Armies, Bankers, Radio, Press, Law and Middlemen trying to become Rankers.

The play, which is solely a matter of skill, centers around opposing forces trying to dominate one neutral piece called Government while either the red or white side, as the antagonists are named, is in power.

The game may be played by either two, three, or four persons and is substantially like chess. But gone are the Pawns, the Knights, and the Kings and Queens,