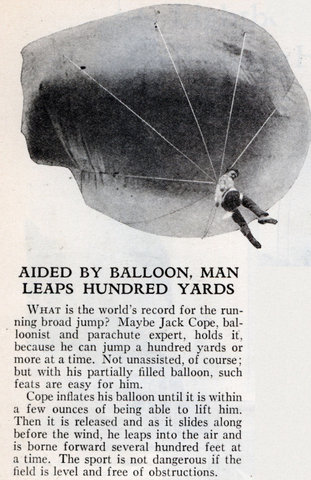 What is the world’s record for the running broad jump? Maybe Jack Cope, balloonist and parachute expert, holds it, because he can jump a hundred yards or more at a time. Not unassisted, of course; but with his partially rilled balloon, such feats are easy for him.

Cope inflates his balloon until it is within a few ounces of being able to lift him. Then it is released and as it slides along before the wind, he leaps into the air and is borne forward several hundred feet at a time. The sport is not dangerous if the field is level and free of obstructions.