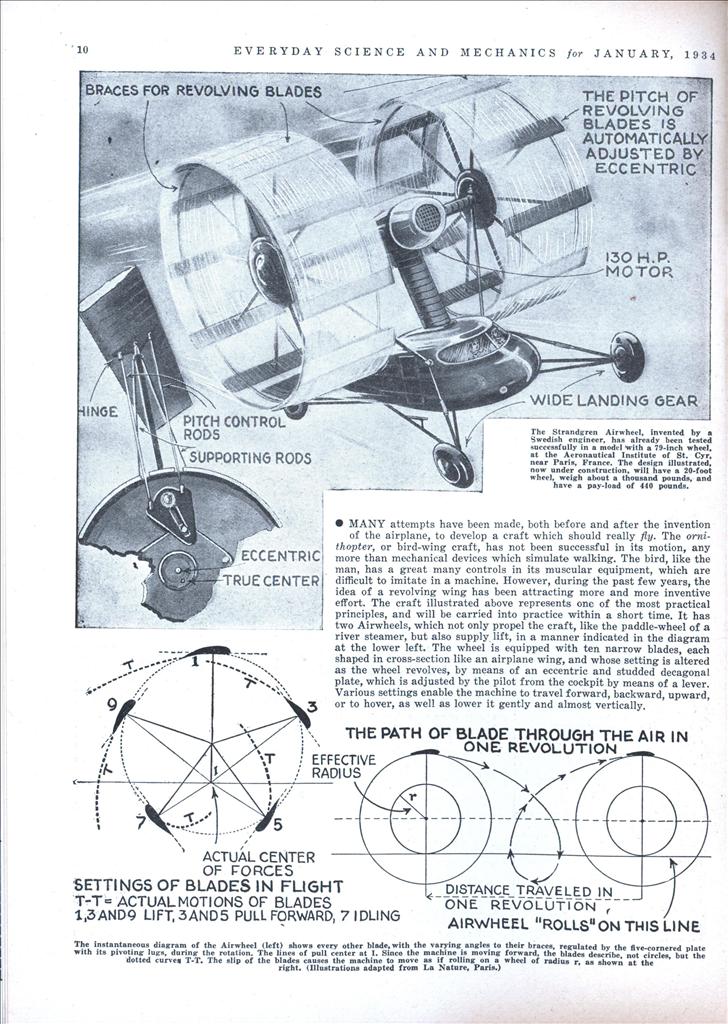 “Airwheel” Flies by its Revolution

MANY attempts have been made, both before and after the invention of the airplane, to develop a craft which should really fly. The ornithopter, or bird-wing craft, has not been successful in its motion, any more than mechanical devices which simulate walking. The bird, like the man, has a great many controls in its muscular equipment, which are difficult to imitate in a machine. However, during the past few years, the idea of a revolving wing has been attracting more and more inventive effort. The craft illustrated above represents one of the most practical principles, and will be carried into practice within a short time. It has two Airwheels, which not only propel the craft, like the paddle-wheel of a river steamer, but also supply lift, in a manner indicated in the diagram at the lower left. The wheel is equipped with ten narrow blades, each shaped in cross-section like an airplane wing, and whose setting is altered as the wheel revolves, by means of an eccentric and studded decagonal plate, which is adjusted by the pilot from the cockpit by means of a lever. Various settings enable the machine to travel forward, backward, upward, or to hover, as well as lower it gently and almost vertically.

For instance, take the positions of the blades for forward flight, as shown in the lower left illustration. The uppermost blade is lifting, in the manner of the normal airplane wing. The third blade (half of them are omitted for clearness) has had its angle to the brace changed; it is still lifting; but it is also exerting a forward pull. The fifth blade is hardly lifting, but it is pulling forward. The seventh blade (because of the forward motion of the plane) is not pulling backward, but slipping through the air. The ninth blade is exerting lift. All these pulls, transmitted through the framework, will be found to center at the point I; which corresponds, in a way, to the point at which the tractor wheel of a bicycle is touching the ground. The total effect of these forces is to draw the machine forward, while sustaining it in the air. A change in the setting of the blades, effected by turning the eccentric through a sleeve over the driving shaft, will change the direction of the combined forces; so that the Airwheel will exert its pressure backward, or forward. Like the autogyro, the machine will settle down almost vertically, and quite safely, with its blades revolving; though it does not seem well adapted to swift flight, it will be easy to control, and suitable for private operation over short distances, like a family car.

The model recently tested had five wings, five feet in span (length) and 10 inches in chord (depth), on a framework 79 inches in diameter, and driven by a 4-H.P. motor. After satisfactory performance in a wind tunnel, it was decided to build a full-scale craft, of the passenger-carrying type; with a net weight of 990 pounds and pay-load capacity of 440 pounds. It will be driven at 120 R.P.M. by a 130-H.P. motor. This, with a rim speed of 125 feet per second (85 miles an hour) will give a calculated lift of about 1,760 pounds.

It will be observed that there is no rudder. Alteration of the settings of one Airwheel, as compared with the other, has the effect of banking and turning the machine. Since there is a slip of the machine through the air, it does not progress the full circumference of the wheel at each revolution; but about half that distance, as diagrammed at the lower right of page 10.

While several designs of aircraft with revolving wings, rotors, etc., have been made, especially lately, the Airwheel seems to have greater possibilities, for its specific purpose, than most of the others.

It is interesting to note, in connection with the Airwheel above, a new “water-wheel” or type of propeller, now in use with fairly large vessels, of several hundred horsepower, on Lake Constance, and the river Danube, in Europe.

The propeller discs are set, at right angles, with four to six blades, whose settings are changed by gears as they turn.