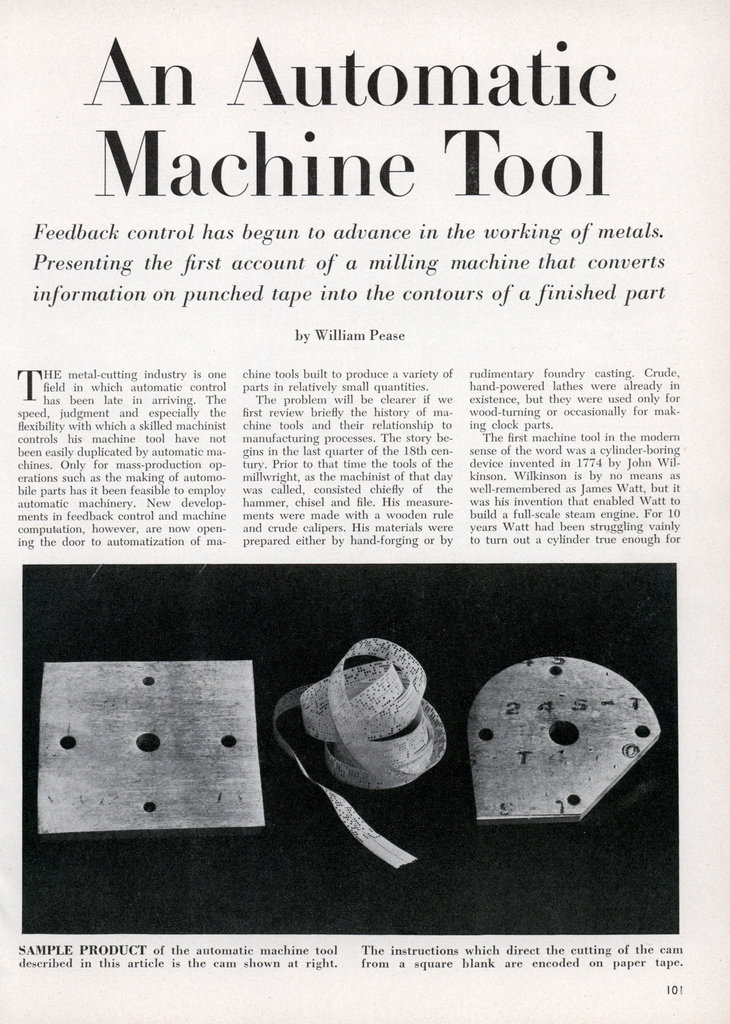 The first machine tool in the modern sense of the word was a cylinder-boring device invented in 1774 by John Wilkinson. Wilkinson is by no means as well-remembered as James Watt, but it was his invention that enabled Watt to build a full-scale steam engine. For 10 years Watt had been struggling vainly to turn out a cylinder true enough for the job. After one effort lie reported in discouragement that in his cylinder of 18-inch diameter “at the worst place the long diameter exceeded the short by three-eighths of an inch.” But in 1776 Watt’s partner, Matthew Boulton, was able to write: “Mr. Wilkinson has bored us several cylinders almost without error; that of 50 inches diameter, which we have put up at Tipton, does not err the thickness of an old shilling in any part.” The importance of Wilkinson’s boring machine cannot be overestimated. It made the steam engine a commercial success, and it was the forerunner of all the large, accurate metal-working tools of modern industry.

Another productive Englishman of the same period was Joseph Bramah. His inventions included one of the most successful locks ever devised, the hydraulic press, various woodworking machines, the four-way valve, a beer pump and the water closet. To manufacture his inventions he and an associate, Henry Maudslay, created several metal cutting machines. The most significant of these was a screw-cutting lathe with a slide rest and change gears remarkably like our modern lathes.

THE NEXT great step forward in machine technology was pioneered by Eli Whitney. Although he is remembered mainly as the inventor of the cotton gin, his greatest contribution was an innovation of much more general import: interchangeability of manufactured parts. In 1798 Whitney, having made little money from the cotton gin, set up in New Haven as a manufacturer of muskets for the U. S. Government. He employed on this contract the interchangeable system of manufacture which was at that time still considered impractical by most experts. In fact, two years later it was necessary for Whitney to go to Washington to reassure the Secretary of War and officers of the Army that his idea was sound. Displaying 10 muskets, all tooled as nearly alike as he could make them, he showed that the gun parts could be interchanged among all 10

without affecting the guns’ operability. He went on to prove in his New Haven shop that precision machinery operated by relatively unskilled labor could make parts accurately enough for interchangeability, so that expensive handwork was no longer required.

Whitney’s idea was received with skepticism, but it eventually won out. Interchangeable manufacture is a fundamental principle of all quantity pro-

duction as we know it today. Automobiles and washing machines, typewriters and egg beatersâ€”every common machine we use is manufactured with interchangeable parts.

In a sense the guides, tracks and other devices built into machinery to raise its precision level are a kind of automatic control. This type of automatism is no new concept in the metal-cutting industry. From the beginning machine tools were created to reduce the amount of human skill required in manufacture. These automatic aids to proficiency, always adhering to the double principle of accuracy for inter-changeability and speed for economy, have increased through the years.

FLEXIBLE MACHINES, capable of manufacturing a wide assortment of parts, are an essential part of modern manufacturing technique. The reason why they have thus far been untouched by automatic control can be given in terms of the concepts of information flow and feedback control.

A rough measure of the cost of automatic control is the amount and nature of the information the automatic machine must handle. To perform a complicated operation such as manufacturing a metal part, we must build into the machine a great deal of information-handling capacity, for it has to carry out a whole complex of instructions. This initial equipment is expensive. If the machine is to manufacture only a single product, say an automobile crankshaft, in large quantities, the investment is spread over many items and the cost of each crank-shaft is small. In such a case the automatic machine is worth its cost.

But suppose we want an automatic machine which will make not one particular product, or part, but a number of different kinds of products, and only a few of eachâ€”as the versatile machine tool must do. Now the machine must handle a different set of instructions for each product, instead of the single set of instructions for the crankshaft. In other words, it must be able to deal with more information. And the cost of the information-handling capacity needed for each product is spread over only a few items instead of many. This is the essential problem in automatizing machine tools.

Obviously one way to attack the problem is to economize in the information requirements of the machine for the various operations. What are these requirements? To begin with, the machine tool must orient itself continuously toward the material on which it is working; if it is to drill a hole in a piece of metal, it must drill the hole in the right place and to the right depth.

Early in their history machine tools began to acquire automatic feed mechanisms. Maudslay’s screw-cutting lathe, which controlled precisely the distance that the cutting tool was advanced for each revolution of the work piece, was an expression of this principle. Another step toward automatization was Thomas Blanchard’s invention in 1818 of the “copying” lathe for turning gun-stocksâ€”the first of a class of tools now known as “cam-following” machines. This type of tool is automatically oriented to machine irregular shapes. The information required to specify the irregular shape is stored in a cam built to represent that shape. An important weakness of these machines is that all the force required to position the cutting tool is furnished by the cam itself. It is costly to build a mechanism strong and accurate enough to transfer motion from the cam to the work piece, and the cam wears out.

Feedback control made its first significant entrance into the machine-tool field in 1921, when John Shaw, working in the shop of Joseph Keller, invented the Keller duplicating system. In this system the information source is not a cam but a plaster-of-paris or wood model of the part to be machined. An electrical sensory device traces the model shape and transfers the information to the tool. By permitting the use of soft, easily fabricated models, the method reduces the cost of information storage. Modern versions of the duplicating system are embodied in the die-sinking machines of the Pratt & Whitney Division of the Niles-Bement-Pond Company. An hydraulic form of it was originated by Hans Ernst and Bernard Sassen at the Cincinnati Milling Machine Company in 1930. Since World War II a number of manufacturers have developed systems of this kind, employing a variety of electrical, mechanical and optical devices.

A further step in the reduction of the cost of information storage and transfer is promised through the use of digital information processes. A number of applications of digital processes to machine-tool control are currently being made. Let us look in detail at one of the most ambitious of these completed this year at the Massachusetts Institute of Technology.

THE M.I.T. system combines digital and analogue processes under feedback control to govern a milling machine whose cutting tool moves in three planes relative to the work piece. In this case the “model” of the object to be fabricated is supplied to the machine in the form of a perforated paper tape similar to that used in teletype systems. For a typical operation, 10 feet of tape will keep the machine busy for an hour.

The components of the M.I.T. system are grouped into two major assemblies. The first of these, called the “machine,” comprises the milling machine itself, the three servo-mechanisms employed to operate its moving parts, and the instruments required to measure the relative positions of these parts. The second assembly, called the “director,” contains all the data-handling equipment needed to interpret the information on the tape and to pass it on as operating commands to the machine. The director contains three major elementsâ€”a data-input system, a data-interpreting system and a set of three decoding servo-mechanisms.

The purpose of the data-input system is to take the original instructions off the tape and feed them into the interpretive and command elements of the director. It consists of a reader, whose metal fingers scan the tape and report the presence or absence of holes by electrical signals, and a set of six relay registers (two for each of the basic machine motions) which store and transmit this information in numerical form. The registers are supplied in pairs, so that while one of them is in control of the machine, the other can receive information from the tape. At the end of each operating interval, command is transferred instantaneously from one register to the other.

The data-interpreting system picks up the numerical instructions stored in the registers and transmits them as pulse instructions to the decoding servo-mechanisms. These pulse