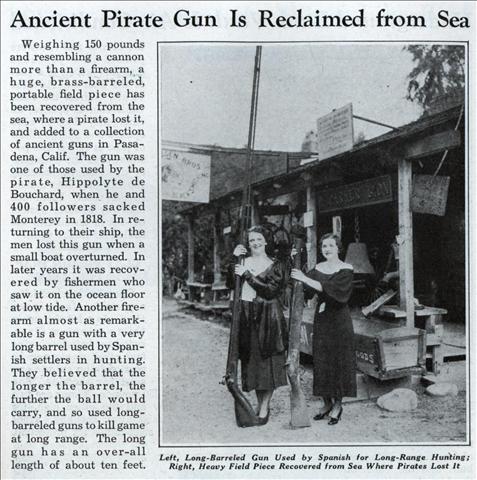 Weighing 150 pounds and resembling a cannon more than a firearm, a huge, brass-barreled, portable field piece has been recovered from the sea, where a pirate lost it, and added to a collection of ancient guns in Pasadena, Calif. The gun was one of those used by the pirate, Hippolyte de Bouchard, when he and 400 followers sacked Monterey in 1818. In returning to their ship, the men lost this gun when a small boat overturned. In later years it was recovered by fishermen who saw it on the ocean floor at low tide. Another firearm almost as remarkable is a gun with a very long barrel used by Spanish settlers in hunting. They believed that the longer the barrel, the further the ball would carry, and so used long-barreled guns to kill game at long range. The long gun has an over-all length of about ten feet.