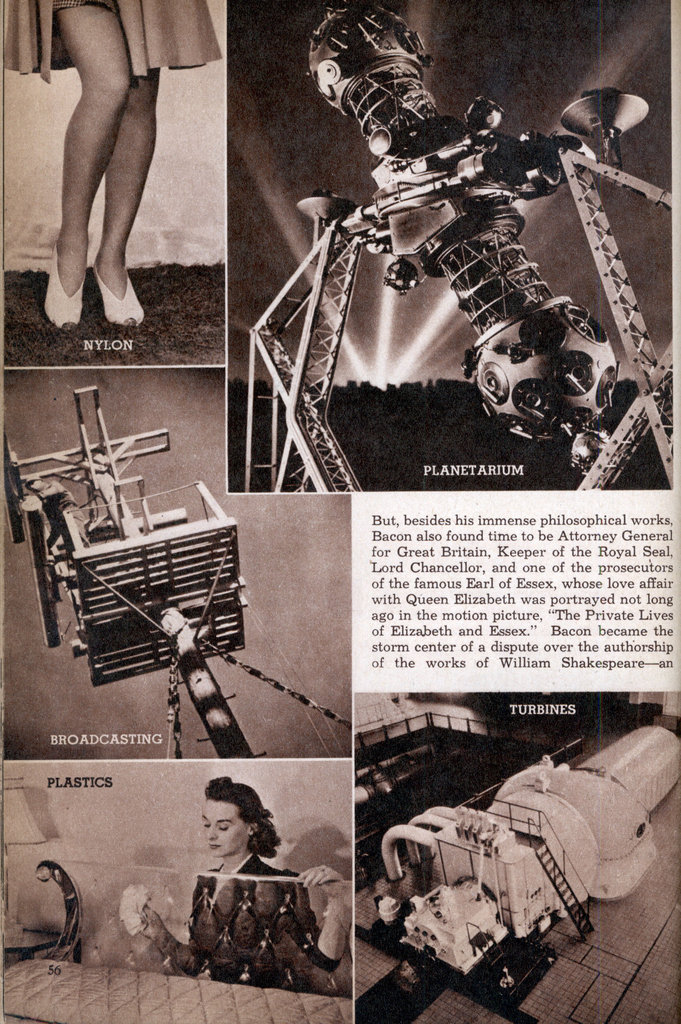 Recently a research scientist, digging through the latin script of this ancient work checked off the list of these three hundred-year-old predictions and found that every one of them had come trueâ€”except one!

The only scientific marvel foreseen in this work which has not yet been realized is the broadcasting of smells!

The author of this unbelievably clairvoyant treatise was Sir Francis Bacon. He. himself, led a life almost as fantastic as the scientific predictions he made. Today, Bacon is revered as the “father” of modern science. He was the first expounder and advocate of the experimental method in physical science.

But, besides his immense philosophical works, Bacon also found time to be Attorney General for Great Britain, Keeper of the Royal Seal, Lord Chancellor, and one of the prosecutors of the famous Earl of Essex, whose love affair with Queen Elizabeth was portrayed not long ago in the motion picture, “The Private Lives of Elizabeth and Essex.” Bacon became the storm center of a dispute over the authorship of the works of William Shakespeareâ€”an argument which still rages to this day, in which many students maintain that Bacon truly wrote the masterpieces attributed to the Bard of Avon.

And, just to add spice to his varied career, Bacon wound up his public life locked in the Tower of London, guilty of accepting $200,000 in bribes!

Bacon’s amazing prophecy of modern inventions was made in an essay called “The New Atlantis,” published in the year 1620. Writing in a recent issue of the General Electric Company’s magazine, Mr. L. A. Hawkins called this work of Bacon’s “the world’s first experiment in the popularization of science.” “The New Atlantis,” in other words, was the direct progenitor of Mechanix Illustrated!

In order to appreciate fully the magnitude of Bacon’s intellectual accomplishment in “The New Atlantis,” one must remember that at the time he wrote this essay, there was no such thing as science. People of those dark days believed that serpents, worms, frogs and similar forms of life were magically “generated”‘ from mud and slime. All phenomena which they could not explain they ascribed to wizards and witchcraft. The dreaded Inquisition was still in existence, torturing and killing those brave souls for heresy who dared to expound new ideas.

Living in this morass of ignorance, then, Bacon wrote his essay. In it, he pictured a magic island, cut off from the rest of the world, where he found a race of people who had progressed beyond his times. He then proceeded to outline some of the wonders which this perfect people had created. It was his view of the future.

In New Atlantis, Bacon wrote, “Science is the civilizer which binds man to man.” Here was the first conception of the scientific state â€”the “new” dream of such modern philosophers as H. G. Wells.

Bacon wrote in stilted, academic Latin, and when his words are translated they sound colorless and dull, in themselves. But read a few excerpts from this ancient book and grasp the vivid imagination at work behind the musty words. As you read this passage, ask yourself whether Bacon was not describing the generation of electricity, electric light, television, the talking movies, amplification, the loud speaker, and the radio:

“We have artificial thunder and lightning. We have instruments which generate heat only by motion” (the dynamo?), “and we find, also, divers means, as yet unknown to you, of producing light, originally, from divers bodies.

“We have high towers, the highest about a half a mile, and some of them set upon mountains. We have houses where we make demonstrations of all light and radiations, and out of things uncolored and transparent we can represent to you all several colors and multiplications of light, which we carry to great distances, and make so sharp as to discern small points and lines. We procure means of seeing objects afar off, as in remote places.

“We have also houses of deceit of the senses, where we represent false apparitions and illusions. Also all delusions and deceits of the sight, in figures, magnitudes, motions and colors; all demonstrations of shadows.

“We also have sound houses, where we practice and demonstrate all sounds and their generation. We have divers strange instruments of music. We represent small sounds as great and deep” (amplification?) “and artificial echoes, reflecting the voice many times and some that give back the voice louder than it came” (loudspeaker?).

“We have all means to convey sound in trunks and pipes, in strange lines, and distances.”

Although skeptics will argue that Bacon was having a pipe dream, certainly the fundamental conception of a great many of today’s marvels is contained in that passage.

In his next paragraph, Bacon speaks of “violent streams and cataracts which serve us for many motions, and likewise engines for multiplying and enforcing the winds to set also on divers motions.” Did he foresee hydro-electrics? Were the “engines for multiplying the winds” the first conception of aerodynamics. It seems incredible that even as great a genius as Bacon could have had, in his age, any means of envisioning such wonders. But it is difficult to interpret his words otherwise.

In rapid succession, as among the miracles of New Atlantis, Bacon mentions:

“Boats for going under water and brooking seas.”

“Mechanically made silks, linens and tissues.” (Did he mean rayon and nylon?)

“Glass of divers kinds, among them some metals vitrificated.” (What are modern plastics but “metal vitrificated?”)

Bacon’s list of miracles-to-come grows more astounding as it continues. Centuries before Mendel disclosed the principles of plant heredity, or Burbank produced his varieties, or the modern methods of plant “forcing” were discovered, Bacon spoke of the grafting and inoculating of trees, fruits and flowers, “which produceth many effects. We make by art, in the same orchards and gardens, trees and flowers to come earlier or later than their seasons. We make them by art much greater than their nature, and of differing taste, smell, color and figure than their nature.”

Bacon was three hundred years ahead of Dr. Alexis Carrel and his chicken heart which he has kept alive in the laboratory by artificial means. Bacon wrote of “places for animal dissection, wherein we find many strange effects, as continuing life in them though divers parts, which you account vital be perished and taken forth; resuscitating some that seem dead, and the like.”

Recently, there has been much discussion of the experiments by which cancer sufferers are placed in ice for treatment; yet Bacon, three centuries ago, wrote of the “prolonging of life and the curing of some diseases by refrigeration.”

On the subject of medical science, in addition, Bacon described the microscope and added, “we have houses wherein we make observations otherwise unseen in the blood and urine.”

The Hayden Planetarium was built in New Yorkâ€”three hundred years after Bacon described it. For in New Atlantis, he says, “We have great and spacious houses where we imitate and demonstrate the meteors.”

Air conditioning? Our most modern industry? See New Atlantis: “We have certain chambers called chambers of health, wherein we qualify the air as we think good and proper.”

In New Atlantis, Bacon said, “We have learned to imitate birds, and have a degree of flying!”

Bacon described “engines which go with the speed of guns, even as from muskets.”

The army’s new food concentrates are close to Bacon’s “drinks brewed of flesh, where some are of the effect of meat and drink both.” Fittingly enough, Sir Francis Bacon died as a direct result of his fervor for the new conception of experimentation. He spent much of his time outdoors during the last winter of his life. He was intrigued with another new idea: the preservation of fresh meat and foods by freezing! He contracted pneumonia from exposure, while packing meat into a snowdrift one night. He died anticipating our modern science of refrigeration!

All of Bacon’s fabulous predictions for the future have now been realizedâ€”with one exception.

“We have,” Bacon said, in closing, “houses wherein we have means of multiplying and sending distances smells and tastes.”

Who will be the first to broadcast smells and tastes, to add the final touch of realism to television? When will the record of Sir Francis Bacon’s three-century-old clairvoyance be completed?