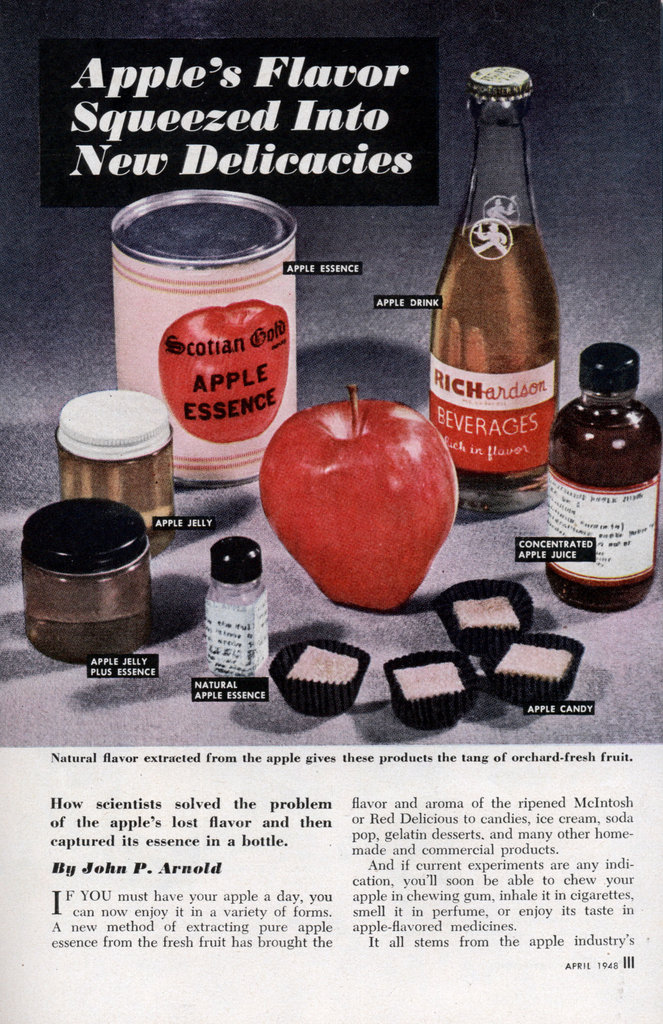 How scientists solved the problem of the apple’s lost flavor and then captured its essence in a bottle.

IF YOU must have your apple a day, you can now enjoy it in a variety of forms. A new method of extracting pure apple essence from the fresh fruit has brought the flavor and aroma of the ripened Mcintosh or Red Delicious to candies, ice cream, soda pop, gelatin desserts, and many other homemade and commercial products.

And if current experiments are any indication, you’ll soon be able to chew your apple in chewing gum, inhale it in cigarettes, smell it in perfume, or enjoy its taste in apple-flavored medicines.

It all stems from the apple industry’s problem of producing a concentrated apple juice that would keep for year-round sale and still have the flavor of fresh cider, which is perishable. Processors had learned that by adding an enzyme, Pectinol A, they were able to break down the pectin that causes gelling. Thus they produced an apple juice of about 75 percent solids; it had excellent keeping qualities and could be shipped in tank cars without special precautions. But, unfortunately, the processing robbed the juice of most of its flavor, and it couldn’t compete with fresh apple cider.

When the processors tossed their problem into the collective lap of Department of Agriculture scientists, the latter had a theoretical, but wholly logical, answer: extract the flavor from the fresh apple; process the fruit; put the flavor back in again.

“Yeah, brother, but how do that?” was the wail. “Don’t know, but let’s try,” the scientists replied. So an experimental station was set up at the department’s Eastern Regional Research Laboratories, at Wynd-moor, Pa. There, for several years, the apple has been given such a thorough going over that it has fewer secrets than a presidential candidate.

After much trial and error, the researchers hit on a way of capturing the sources of the natural apple flavor, located for the greater part just under the skin. The process consists of first heating the juice of pressed apples to volatilize the flavoring elements. Then the vapor is mechanically separated from the juice, concentrated by fractional distillation, and condensed.

The result is a clear, colorless liquid, a 150-fold concentration of the juices from which it is extracted. And the stuff is so powerful that a few drops released in a room carry you right back to the old orchard.

This separation of the apple flavor has been a shot in the arm for the apple industry. The essence is first recovered from the fruit. The juices are then concentrated and reflavored with the essence, with the result that there is no apparent difference between the processed product and apple cider fresh from the presses. Another advantage is that peelings and other parts of the apple, often waste products, can now be used. Also, apples of inferior flavor can be squeezed for juice-making and then spiked with the essence of the more desirable varieties.

Six companies already are selling the essence, and 60 others are installing the equipment for making their own products. Other fruits and berries are also in line to have the juice knocked out of them.

Since its extraction, the new essence has found many other uses outside the apple industry. Perfume-makers are experimenting with it. Research chemists say it may serve as a bait for insect poisons and as a mask for the nasty taste of castor oil and other medicines. The housewife will soon have a bottle of it on her kitchen shelf to flavor a dish of ice cream or a gelatin mix. Since the day of the Big Apple, this fruit has never had such a big moment.