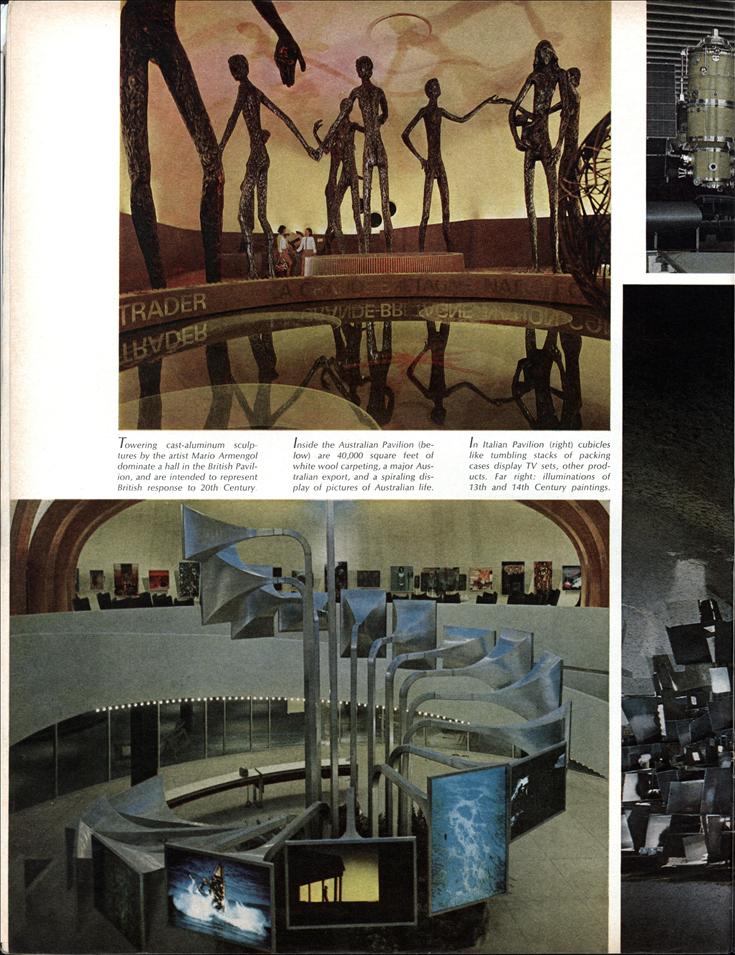 Photographed by MARK KAUFFMAN and MICHAEL ROUGIER It could have been the imagery of a mad poet or a god. A transparent bubble flung up by the U.S. breaks the sky 20 stories high, and across the way the Russians have hung walls of glass on a ski jump of a roof. The architecture of Expo 67, Montreal’s world’s fair which opens this week, is a stunning leap into tomorrow. The West Germans came with a tent you could lose a small town in and draped it over giant poles. The British gaily cantilevered exhibitions far out over a yawning moat. In all ways, Expo, which cost $1 billion, turns out to be the biggest show ever. Queen Elizabeth is coming, and so too are the Bolshoi Opera and Olivier and La Scala and Dietrich. Wise visitors will not wait for the crowds to thin out. On the principle that a good show leaves them shouting for more, Montreal has decided there will be no Expo 68.

A skyline of amazing shapes

Expo occupies two islands in the St. Lawrence, connected by bridges {right). There are 63 national pavilions, far more than any other fair has assembled. Some of the most striking are pictured on these pages.

The fair was built with the convenience of visitors in mind. Admission is inexpensive and the average visitor will spend less than $5 daily inside the gates. Because a train will transport him around the grounds without charge, his feet will pain him less than at any other major fair in recent memory. Nor will he have to waste hours in queues: computers will digest information about lines and flash the minute-by-minute situation onto big electronic tote boards. {“Skip the British Pavilion. Crowded,” the boards might read.) However, Montreal {pop.: 2 million) has not yet solved the problem of lodging its expected 35 million visitors.

Just before Expo opened, I became one of the first human passengers to take a trial spin on the Gyrotron, a $3 million contraption that promised to lift its passengers into a facsimile of outer space and then dunk them in a fiery volcano.

It had already been tested with sandbags in the seats instead of people. But still, as I climb aboard, I am nervous, both on my own behalf and for my friends, Sean Kenny, who designed the unholy thing, and his wife, who are sitting beside me. It would be the world’s loss if Kenny, a gifted architect and theater designer, was hoist by his own petard, only to be cooked in his own volcano.

An iron bar, like a seat belt, is locked over our laps, and we join the parade of 84 little four-seated cars rolling up a ramp into the giant Gyrotron entrance. The main structure is a huge, hollow pyramid that appears to hang inside a scaffold of aluminum tubing—27 miles of it. Once inside the dark pyramid, we orbit up an invisible spiral track. Glowing around us are spinning planets, comets, galaxies. But most impressive are the man-made satellites, Telstars, moon rockets and other vehicles. At the top we veer toward a space station where three silver-clad astronauts appear to be weightlessly afloat. Vooming in our ears are electronic ululations, deep beeps and astral snores.

We roll out of the pyramid above the Expo grounds, heading on a track for the last lap of the ride: Kenny’s volcano. It is an oddly shaped, red aluminum shaft, wafting steam. It looked as if we were about to hurtle down a huge incinerator. In my flash of fright I began to review not my own life but the life of Kenny, in whose hands at this instant my future seemed so precariously held.

Kenny’s blend of fanciful mysticism and engineering genius came to him naturally: he was born in Dublin. “I got a pretty basic upbringing in the ordinary magical life of Ireland —witches, ghosts, fantastic storytellers,” he says. “Now I’m making the magic practical.”

From his father, an architect, he got the idea of being a builder, and from some magazine pictures of Frank Lloyd Wright’s work he got the idea of studying with Wright in the U.S. After an exchange of brisk notes, Wright advised him to complete his basic architecture course in Dublin, then, “Come any time you like.” So in 1950 Kenny and three friends bought a 30-foot shrimper and set sail.

Though Kenny is soft-spoken, stocky and calm, with his short legs planted prosaically on the ground, he seems to attract theatrical events. At 21, on his Atlantic crossing, he outrode a hurricane, was met by an airplane escort over New York Harbor, made front-page news and was invited to judge a beauty contest. Reading about all this, Wright wired to New York: “What the hell are you doing?”

Kenny bought a car and drove to Wisconsin, where Wright had his great school.

“When I first saw him,” recalls Kenny, “he was having breakfast with his students. ‘I’m the man from Dublin,’ I said. ‘Good,’ he replied. ‘There’s a pick and shovel outside the door. Go and build your own house.’ ” Kenny did—in the shape of an umbrella; but after a year with Wright he returned to England. Soon Kenny was acclaimed Britain’s best stage designer. He did designs for opera and ballet. But his specialty was a series of electronically controlled sets for big musicals such as Oliver and Pickwick, sets that split apart, glided and twirled like waltzing silos. In 1964 he installed an electronic marvel at The Dunes nightclub in Las Vegas. It consisted of five spinning stages that skimmed out over the audience, heaped with nude beauties.

Kenny puts his talents to sacred as well as profane uses. He has designed a church for a mountain top and is pondering a church for the moon. Possessed of probably the most untrammeled and resourceful imagination of any living architect, he also is working on an undersea nightclub and recreation park for Nassau; and because he is out of patience with orthodox sit-still audiences, he has designed a theater that whirls spectators as if they were on a carrousel, and he envisages vast sea pageants where audiences will be submerged to watch the sinking of an entire fleet. His apocalyptic visions include taking an audience atop a hill to see a fiery chariot in the clouds. How to do it? Easy. Helicopters and smoke screens.

In his Gyrotron, Kenny feels he has taken a big step toward audience mobility. He will move 30,000 people a day straight into the jaws of hell. We begin to plunge down the red incinerator, surrounded by simulated lava, steam and demonic shrieks. Kenny’s contraption holds safely together. The ride ends as we are gobbled by a monster and finally expelled.

Actually, I like the space part of the ride better, maybe because science fiction—and science fact—-appeals to me more than horror tales. I ask Kenny what he means by this monster business, so reminiscent of old-time medieval church plays. “The monster is the kick in the tail—everything that distracts us from reality, whirring washing machines, super-duper cars, oversell and undersell. It’s what we lean on, our prop and our crutch—our jangled crutch.” Performing that symbolic function, the Gyrotron will stay on permanently after Expo closes.