Mechanix Illustrated
Issue: Jun, 1956
Posted in: Sign of the Times, Space
7 Comments on Are the Russians Beating Us Into Space? (Jun, 1956) 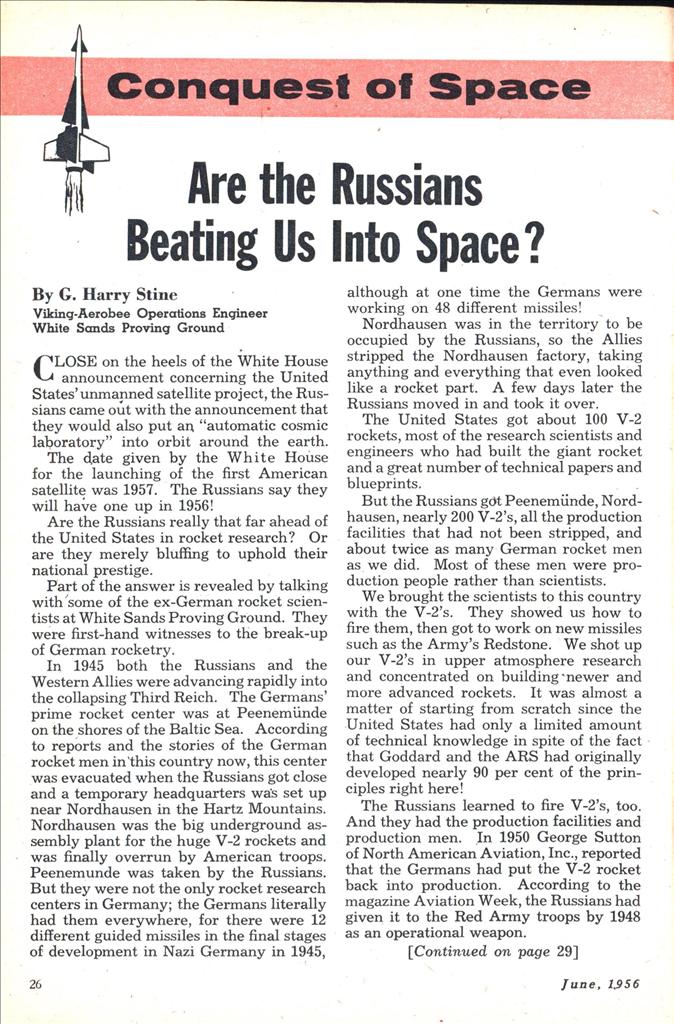 Are the Russians Beating Us Into Space?

CLOSE on the heels of the White House announcement concerning the United States’ unmanned satellite project, the Russians came out with the announcement that they would also put an “automatic cosmic laboratory” into orbit around the earth.

The date given by the White House for the launching of the first American satellite was 1957. The Russians say they will have one up in 1956!

Are the Russians really that far ahead of the United States in rocket research? Or are they merely bluffing to uphold their national prestige.

Part of the answer is revealed by talking with some of the ex-German rocket scientists at White Sands Proving Ground. They were first-hand witnesses to the break-up of German rocketry.

In 1945 both the Russians and the Western Allies were advancing rapidly into the collapsing Third Reich. The Germans’ prime rocket center was at Peenemunde on the shores of the Baltic Sea. According to reports and the stories of the German rocket men in this country now, this center was evacuated when the Russians got close and a temporary headquarters was set up near Nordhausen in the Hartz Mountains. Nordhausen was the big underground assembly plant for the huge V-2 rockets and was finally overrun by American troops. Peenemunde was taken by the Russians. But they were not the only rocket research centers in Germany; the Germans literally had them everywhere, for there were 12 different guided missiles in the final stages of development in Nazi Germany in 1945, although at one time the Germans were working on 48 different missiles!

Nordhausen was in the territory to be occupied by the Russians, so the Allies stripped the Nordhausen factory, taking anything and everything that even looked like a rocket part. A few days later the Russians moved in and took it over.

The United States got about 100 V-2 rockets, most of the research scientists and engineers who had built the giant rocket and a great number of technical papers and blueprints.

But the Russians got Peenemunde, Nordhausen, nearly 200 V-2’s, all the production facilities that had not been stripped, and about twice as many German rocket men as we did. Most of these men were production people rather than scientists.

We brought the scientists to this country with the V-2’s. They showed us how to fire them, then got to work on new missiles such as the Army’s Redstone. We shot up our V-2’s in upper atmosphere research and concentrated on building newer and more advanced rockets. It was almost a matter of starting from scratch since the United States had only a limited amount of technical knowledge in spite of the fact that Goddard and the ARS had originally developed nearly 90 per cent of the principles right here!

The Russians learned to fire V-2’s, too. And they had the production facilities and production men. In 1950 George Sutton of North American Aviation, Inc., reported that the Germans had put the V-2 rocket back into production. According to the magazine Aviation Week, the Russians had given it to the Red Army troops by 1948 as an operational weapon.

This story is pretty well backed up by the tales told by the Germans who came to this country. A lot of their friends had been taken by the Russians and they never heard from some of them again. But a short while ago a very significant development took place: a German at White Sands— he’s now a naturalized U.S. citizen—got a letter from one of his friends who had vanished back in 1945 behind the Iron Curtain. While the letter told nothing, the man was back in Germany again. It was somewhat of an indication that the Russians might have picked the brains of the German rocket men and are now proceeding on their own!

By 1953 rumors began reaching this country saying that the Russians had made real improvements on the V-2. They were getting ranges of 500 miles with accuracies of plus-or-minus 2,000 feet at that range. This might seem to be a little fantastic, but the Germans actually achieved an accuracy of about plus-or-minus 2,000 feet at 230 miles range with the V-2 in early 1945.

There were also stories about a super-powerful Russian rocket motor, the Model 103, supposedly capable of 460,000-pounds of thrust and burning kerosene and liquid oxygen. This may well be a development of the V-2 motor for this was the propellant combination the Germans would have liked. But kerosene and gasoline were not available due to the general shortage of petroleum products in the Third Reich.

Recent reports state that the Russians claim to have fired single-stage rockets to 250 miles altitude. They even claim to have made mammal flights with monkeys and mice to 150 miles with successful recoveries.

There is no way of checking some of these reports. Some may be wild rumors, others exaggerated news releases. Our intelligence agencies undoubtedly know more, but they aren’t talking.

But, in spite of these stories, and in spite of the fact that the majority of the information on America’s rocket program is classified, the author is extremely doubtful that the Russians are ahead of us .. . right now.

One particular faction among American rocket people has a very good reason to believe that we have not lost the race, although the race is probably close. They are the electronics specialists, the guidance and control people, the radar men, the instrument men. They all know that a rocket, regardless of how good its motor is, is nearly useless unless you can guide it or have it guide itself.

Anti-aircraft rockets, ICBM’s, or sounding rockets all must have control or they remain big skyrockets. Control and guidance is the single factor which separates modern rockets from their pyrotechnic ancestors.

Soviet progress in nucleonics startled the Western world at the Geneva nuclear power convention, but some experts still maintain that the Russian electronic industry has a long way to go to match ours. Without electronics to guide Russian missiles, it is rather illogical to think that they might surge ahead. Our electronics industry is the result of a great deal of individual incentive and the growing knowledge that progress means better products and markets for those products. Most people have no conception of the staggering assortment of advanced electronic material available today on the open American market. It is only an indication of what is available to American rocket people in the form of equipment and components still highly classified.

The real test will come in the sky. We may not know the answer until we see a bright speck in the sky near sunset. As a rough guess, it is about a 50-50 chance right now that that speck might be carrying a Red Star on its side.

It is time we stopped considering the conquest of space as a silly, fantastic dream. It is real. It is coming. And it is now a matter of national honor and prestige. It will determine for the rest of the world whether or not we are the wonderful Yankee wizards we claim to be.