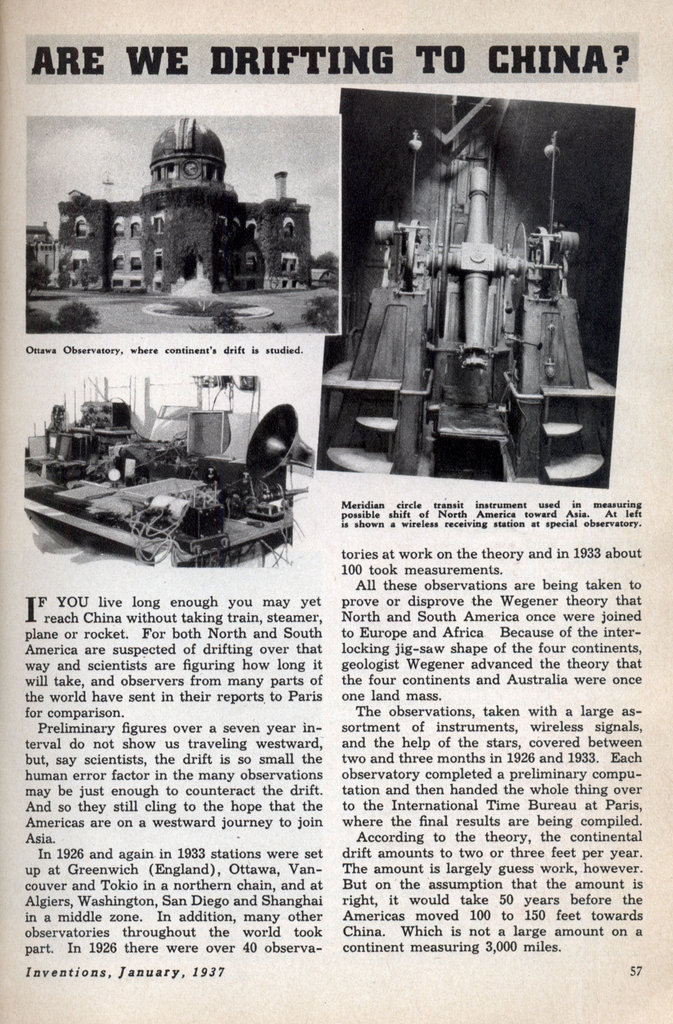 ARE WE DRIFTING TO CHINA?

IF YOU live long enough you may yet reach China without taking train, steamer, plane or rocket. For both North and South America are suspected of drifting over that way and scientists are figuring how long it will take, and observers from many parts of the world have sent in their reports to Paris for comparison.

Preliminary figures over a seven year interval do not show us traveling westward, but, say scientists, the drift is so small the human error factor in the many observations may be just enough to counteract the drift. And so they still cling to the hope that the Americas are on a westward journey to join Asia.

In 1926 and again in 1933 stations were set up at Greenwich (England), Ottawa, Vancouver and Tokio in a northern chain, and at Algiers, Washington, San Diego and Shanghai in a middle zone. In addition, many other observatories throughout the world took part. In 1926 there were over 40 observatories at work on the theory and in 1933 about 100 took measurements.

All these observations are being taken to prove or disprove the Wegener theory that North and South America once were joined to Europe and Africa Because of the interlocking jig-saw shape of the four continents, geologist Wegener advanced the theory that the four continents and Australia were once one land mass.

The observations, taken with a large assortment of instruments, wireless signals, and the help of the stars, covered between two and three months in 1926 and 1933. Each observatory completed a preliminary computation and then handed the whole thing over to the International Time Bureau at Paris, where the final results are being compiled.

According to the theory, the continental drift amounts to two or three feet per year. The amount is largely guess work, however. But on the assumption that the amount is right, it would take 50 years before the Americas moved 100 to 150 feet towards China. Which is not a large amount on a continent measuring 3,000 miles.