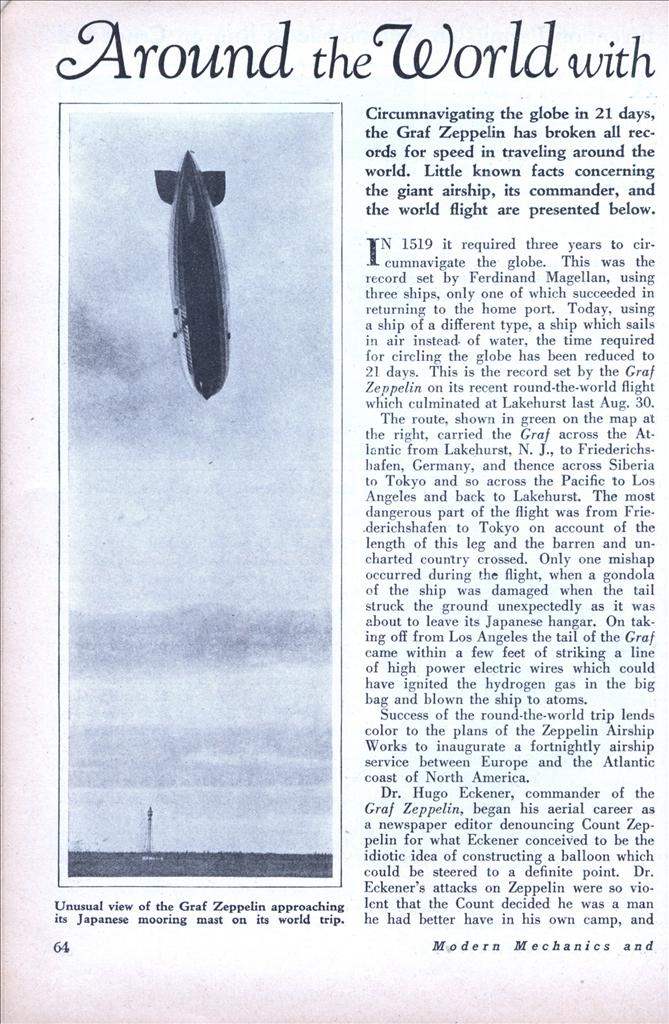 Around the World with the Graf Zeppelin

Circumnavigating the globe in 21 days, the Graf Zeppelin has broken all records for speed in traveling around the world. Little known facts concerning the giant airship, its commander, and the world flight are presented below.

IN 1519 it required three years to circumnavigate the globe. This was the record set by Ferdinand Magellan, using three ships, only one of which succeeded in returning to the home port. Today, using a ship of a different type, a ship which sails in air instead- of water, the time required for circling the globe has been reduced to 21 days. This is the record set by the Graf Zeppelin on its recent round-the-world flight which culminated at Lakehurst last Aug. 30.

The route, shown in green on the map at the right, carried the Graf across the Atlantic from Lakehurst, N. J., to Friederichslhafen, Germany, and thence across Siberia to Tokyo and so across the Pacific to Los Angeles and back to Lakehurst. The most dangerous part of the flight was from Frie-,derichshafen to Tokyo on account of the length of this leg and the barren and uncharted country crossed. Only one mishap occurred during the flight, when a gondola of the ship was damaged when the tail struck the ground unexpectedly as it was about to leave its Japanese hangar. On taking off from Los Angeles the tail of the Graf came within a few feet of striking a line of high power electric wires which could have ignited the hydrogen gas in the big bag and blown the ship to atoms.

Success of the round-the-world trip lends color to the plans of the Zeppelin Airship Works to inaugurate a fortnightly airship service between Europe and the Atlantic coast of North America.

Dr. Hugo Eckener, commander of the Graf Zeppelin, began his aerial career as a newspaper editor denouncing Count Zeppelin for what Eckener conceived to be the idiotic idea of constructing a balloon which could be steered to a definite point. Dr. Eckener’s attacks on Zeppelin were so violent that the Count decided he was a man he had better have in his own camp, and Zeppelin persuaded him to come to Friederichshafen where he eventually became the Count’s most ardent supporter. The Graf Zeppelin and Eckener’s captaincy of the ship stand as a monument to the friendship between the two men.

Contrary to general belief, the motors of the Graf were not changed following its disastrous flight last May when the power plants gave way. The cause of these failures was breakdown of the couplings due to inflexibility in the fittings. With the installation of more elastic couplings, the motors functioned perfectly, and have now run about 1000 hours.

A gas rather than a liquid fuel is used in the Graf Zeppelin. This gas is familiarly known as blaugas, more commonly called Ethane by chemists. This gas has the advantage of weighing practically the same as air, and consequently the weight of the airship is not affected by the quantity of fuel carried. Hydrogen is used to inflate the lifting cells of the dirigible, the non-inflammable helium gas being used only in American ships.