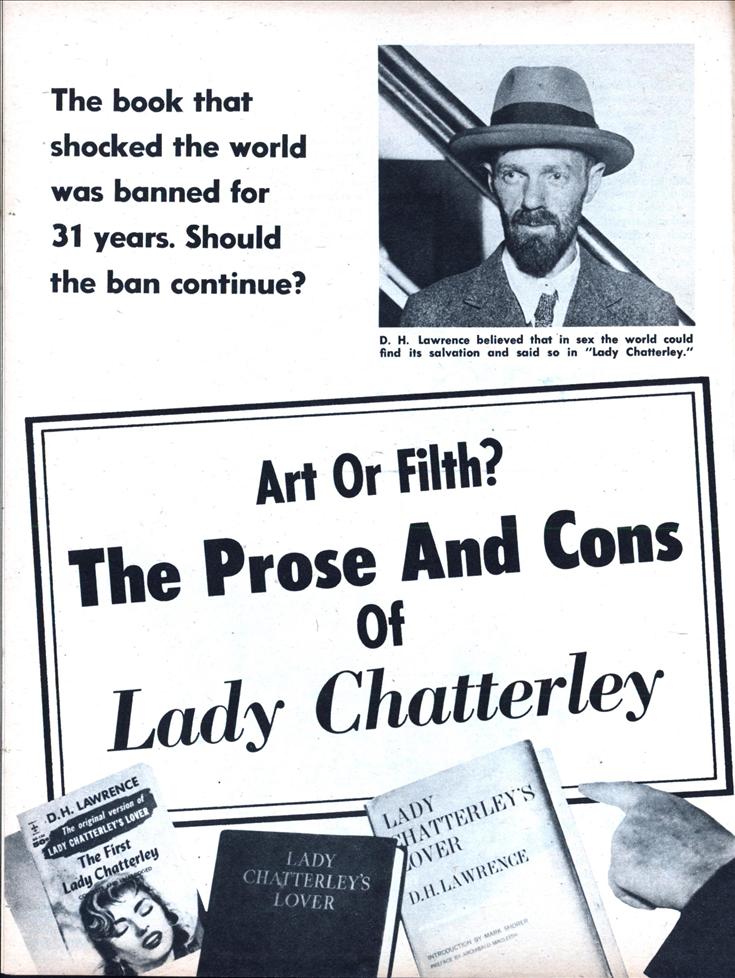 Are they still dirty?

Or are they an important and necessary part of a work of art?

It’s a question that has both the literary and the legal worlds in a first-class tizzy. And it all comes about because of a novel called “Lady Chatterley’s Lover” which was first published in Italy in 1928 and has recently been published by Grove Press in its unexpurgated form for the first time in the United States.

“It’s filth,” cries the Postmaster General of the United States, Arthur E. Summerfield. “If it’s not filth, pray tell me what it is.”

And at the moment of writing, they’re winning, which ought to make the soul of the famous English writer, D. H. Lawrence, rest a little easier.

Lawrence was a man who fought censors all his life. He had to, if only because the philosophy in which he believed most strongly was one that was bound to start a war with them. And it was no cold war, either.

Lawrence believed in SEX and those capital letters are no printer’s error. He believed in sex as a positive philosophy. Lawrence thought we are all pretty much crazy, mixed-up kids. The reason for it, he figured, was that our civilization is too mechanical. We’ve gotten too far away from being natural people—so far away, in fact, that we even let our mental processes get in the way of our lovemaking.

So he thought the best thing for restoring to people some of their naturalness was sex—sex without any of the phony tinsel wrappings we usually put around it, without the fake trimmings of sentimentality. In short, he was in favor of strong, raw, natural sex. This, he believed, was the only way for men and women to come honestly together in real love, with both passion and tenderness.

And this was the belief he was trying to sum up in “Lady Chatterley’s Lover.”

It’s about a woman, Lady Chatterley, who is married to a neurotic man who is impotent. (The husband is a symbol for what Lawrence sees as wrong with our society.) She falls in love with her gamekeeper, has a violent affair with him and the book ends with the suggestion that she’ll get a divorce and marry him.

The first time Lawrence wrote the book, he did it without using and “dirty” words and with sex scenes that were no more detailed than those in most of today’s fiction. That edition was never banned and it has been in circulation in this country for years under the title, “The First Lady Chatterley.”

But Lawrence wasn’t satisfied with that. He felt that he hadn’t really gotten his point across. So he completely rewrote the book, making the gamekeeper a stronger character and more explicit about sex.

Still he wasn’t satisfied. For the third time he rewrote the book and this time he put in the strong words and the details of sex.

Why did Lawrence use those words? Here’s his own answer: “Since the silly desire to bewilder the commonplace person is not worth entertaining, if I used a taboo word there is a reason. We shall never free the phallic reality from ‘uplift’ taint until we give it its own phallic language and use the obscene words.”

In short, he says, let’s quit being neurotic about sex and look at it for what it is, a physical function that expresses the best possible relationship between a man and a woman.

Well, however right or however wrong you believe Lawrence to be, there were a lot of places in the world where the third version of his book couldn’t be sold, including the United States.

But early this year, Grove Press, a venturesome publishing house, felt that the time had come to challenge the taboo and they brought out the book unexpurgated, just as Lawrence wrote it. Literary critics all over the country cheered. Some said it was a masterpiece. Some said it wasn’t all that great, but still it was a good book and a serious one that deserved to be read. Not one important critic felt that the book should continue to be suppressed.

A bookclub for eggheads, the Reader’s Subscription, thought enough of the book to make it a selection and started to mail it out to members.

The fellows who always ring twice refused to ring at all for Lady Chatterley. The P.O. said the book was obscene and couldn’t be mailed.

This punch not only caught the Reader’s Subscription in the solar plexus (they do their business by mail) but it was also a gasser for the Grove Press, which couldn’t mail the copies out to bookstores.

So the two companies demanded a hearing. The Post Office gave them one before Judicial Officer Charles D. Ablard. The companies brought in two of the most eminent literary critics in America, Malcolm Cowley and Alfred Kazin, to testify that the book was not obscene, but was a work of art by a serious artist.

Ablard listened, but passed the transcript and the final decision on to Postmaster General Summerfield. And Summerfield decided that “Lady Chattel-ley’s Lover” was filthy.

“Any literary merit the book may have,” he said, “is far outweighed by the pornographic and smutty passages and words, so that the book, taken as a whole, is an obscene and filthy work.”

Summerfield not only banned the book from the mails, but he also barred certain advertising for it. As a result, some newspapers refused ads from Grove Press, fearing that to accept them might mean that the newspapers themselves would also be barred.

But in other papers, the publishers managed to place ads that announced simply that the Post Office ban forbade them to tell you where you could buy a copy of “Lady Chatterley’s Lover.” You had to figure for yourself that it wasn’t the butcher shop that they wanted you to go to!

Summerfield’s action hotted up the fires some more. Newspapers by the dozens, headed by the lordly New York Times, questioned his right to become a censor. The Times called Summerfield’s action “a foolish gesture that must in the end be upset by the courts.” Columnist Max Lerner questioned that selling automobiles (Summerfield’s business in private life) “is the best preparation for either a literary critic or a censor of public morals.”

So while Grove Press was selling copies of “Lady Chatterley” by the truckload—though not by the mail truckload—the case moved into the courts.

He said that while Summerfield may be qualified to handle the mails “he has no special competence to determine what constitutes obscenity.” He said the Postmaster General’s action was “illegal and void” and he added if “Lady Chatterley” were to be barred from the mails, a substantial portion of the classics of literature would have to go, too. This, he said, would be “inimical to a free society” and a violation of the First Amendment, which guarantees freedom of the press.

The government is appealing Judge Bryan’s ruling (the case will probably reach the Supreme Court) but meanwhile the frolicsome “Lady Chatterley” sails merrily through the mails. • • •