Science And Mechanics
Issue: Apr, 1936
Posted in: Automotive
Tags: how its made
No Comments on Auto Made from Beans (Apr, 1936) 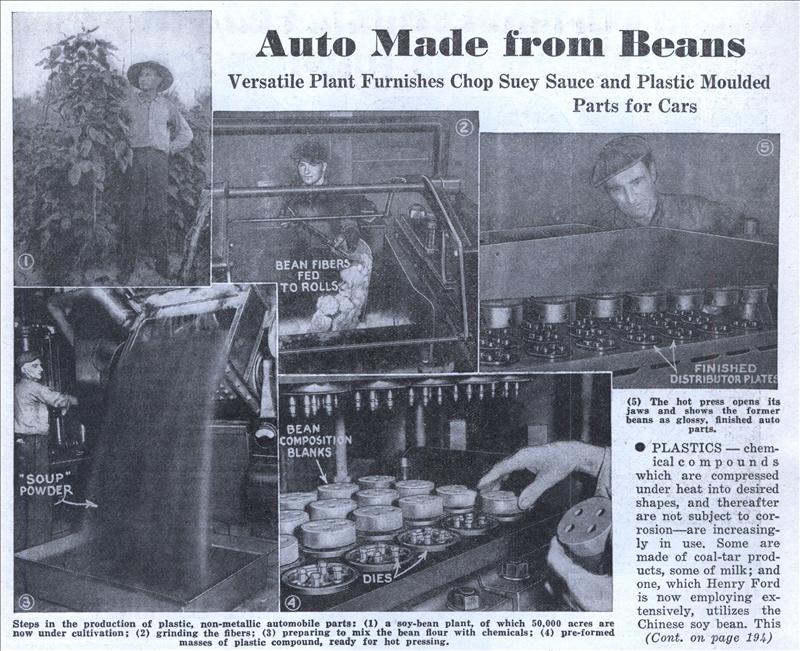 Auto Made from Beans

PLASTICS — chemical compounds which, are compressed under heat into desired shapes, and thereafter are not subject to corrosion—are increasingly in use. Some are made of coal-tar products, some of milk; and one, which Henry Ford is now employing extensively, utilizes the Chinese soy bean. This useful plant, is, next to rice, the staff of life in the Celestial republic; like beans, peas, and other “legume” plants, it contains the proteins, or nitrogen compounds, for which we eat meat. Its oil, also, has found many uses; and those who have eaten the great American national dish, chop suey, are familiar with the dark soy sauce which accompanies it. The mechanical uses of the soy bean (which does not resemble American beans) are of more recent discovery. It furnishes a fibrous flour, which gives body to a phenol (carbolic acid) compound. Under heat and pressure, this changes into a hard, strong, glossy substance, suitable for buttons, knobs, handles, mouldings, etc. About fifteen pounds of beans are now used in each Ford car, and raised under the direction of the manufacturer.

At Dearborn Mich., “automobile farming” is being carried on on a large scale, constantly pointing the way by means of endless research toward greater utilization of farm products in motor-car manufacture. Thousands of acres are producing soy beans, which are fed into hoppers to emerge eventually as moulded car parts and enamel. A simple mechanical set-up has been devised, by means of which the farmer, after he has harvested his crop of soy beans, can turn the beans into a form that can economically be shipped to the factory.

Briefly stated, the preferred method of processing involves the use of a solvent which literally washes the oil out of the beans; after which live steam removes all traces of the solvent from the fiber, which is then available for factory treatment and conversion into moulded plastics. The machinery the farmer needs for this work is simple and easily installed, and the process direct and rapid. It does not require the services of* a chemist or engineer and, once put in use, is practically automatic. Soy beans, after threshing, are stored on the upper floor of the barn, where the heat rising from below dries them somewhat. Directly under an opening in the floor is a set of rollers to which the beans may be fed by gravity. The rollers crush the beans so that the oil may readily be extracted, and then pass the mass along to a pipe fixed at a 10-degree angle to the floor and filled with a solvent—high-test gasoline or naphtha. The crushed beans are put into this pipe at the bottom and carried to the top by means of a screw conveyor, which serves to tumble the mass around and subject it to a thorough washing. As the crushed beans work toward the top of the pipe, the solvent removes practically every vestige of the oil. After some time in contact with the solvent, the bean fibers work upward against the gasoline flow to emerge as a meal from the top, where they leave the solvent chamber and drop into a steamer. The solvent, which the mass has soaked up, is driven off by a current of live steam, and the meal leaves the steamer in granular form and with no trace of the solvent odor.

Meanwhile, the gasoline, which has been working downward against the flow of the mass of crushed beans carries the extracted oil with it to an upright portion of the equipment known as the “neck.” When the oil-laden solvent reaches this point, atmospheric pressure forces it into the neck from which it overflows, leaving the extractor and carrying all the oil with it. Distillation then vaporizes the gasoline; the vapor rises, passes through a cooling apparatus, is condensed back into the form of gasoline and flows back into the top of the pipe which forms the solvent chamber. Thus it is reclaimed and used over and over again, with little loss, and the whole process is continuous.

The distilling apparatus is simple. The gasoline flowing from the “neck,” is first put through a filter which removes all particles of meal. Then it is run into the still which consists of a 12-inch pipe 16 feet long, the upper ten feet of which are filled with coke. The solution, flowing over the coke, meets a rising current of steam, which drives off the solvent, leaving only pure soy-bean oil at the bottom of the still. When the machinery is in operation, there are about 100 gallons of gasoline in the system, flowing constantly in a closed circuit. As every seam and vent is closed, with the exception of one, there is very little waste of gasoline. By this process, 2000 pounds of soy beans yield approximately 400 pounds of oil and 1600 pounds of meal.

It might be said here that the uses for these farm products are not limited to the automobile industry. The plastics made from the soy-bean meal find uses in many fields; they may become parts of radio sets, furniture, ash trays, buttons, spools, and a hundred and one other things limited only by the imagination of the manufacturer and designer.

While the oil extractor described above may appear somewhat complicated, the materials for it are available everywhere, and consist in -part of standard piping.

Sheet metal and pipes are all that are required, and the assembly can be done by any welding shop. The fuel used may be any that is at hand: gas, coal, wood, or oil. Since soy beans can be harvested during the winter, the supply may be brought in as needed; although a two or three weeks’ supply can be stored on the upper floor where they will be subjected to a desirable drying action before being crushed. .

The chemical side of the story, although the result of years of research and experiment, is simply told. After the oil is expressed from the soy beans, the resulting flour or fiber is treated with phenol, caustic soda, and paraformaldehyde and then moulded, at high temperature and pressure, into a material comparable to bakelite. But this plastic, with its wide uses and implications of even vaster utilization, is not the whole story of the soy bean and its part in the modern motor car. The oil, mentioned above, has been found to be a valuable ingredient of enamels and is being so used for automobile finishes.

First introduced into the United States in the early part of the 19th Century, the soy bean gained little favor for nearly a century. For more than thirty years, however, there has been a large increase in the amount of land devoted to the cultivation of the bean. The Department of Agriculture has imported and experimented with over 800 varieties, till research simmered this number down to about 40 kinds suitable for cultivation here. At the present time, the greatest acreage of soy beans is found in the “corn belt” and the South, although its cultivation is spreading in the North. One of its wide farm uses is as a cattle feed.