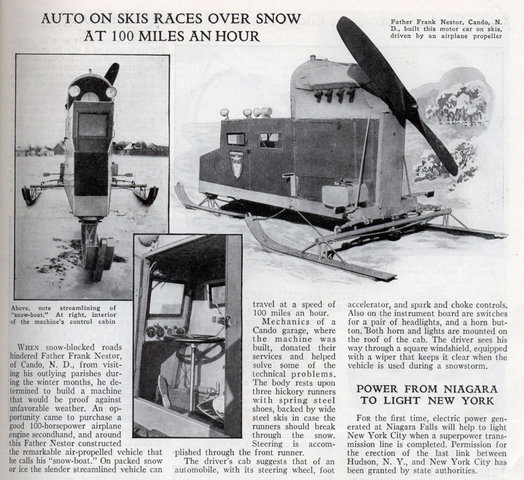 AUTO ON SKIS RACES OVER SNOW AT 100 MILES AN HOUR

When snow-blocked roads hindered Father Frank Nestor, of Cando, N. D., from visiting his outlying parishes during the winter months, he determined to build a machine that would be proof against unfavorable weather. An opportunity came to purchase a good 100-horsepower airplane engine secondhand, and around this Father Nestor constructed the remarkable air-propelled vehicle that he calls his “snow-boat.” On packed snow or ice the slender streamlined vehicle can travel at a speed of 100 miles an hour.

Mechanics of a Cando garage, where the machine was built, donated their services and helped solve some of the technical problems. The body rests upon three hickory runners with spring steel shoes, backed by wide steel skis in case the runners should break through the snow. Steering is accomplished through the front runner.

The driver’s cab suggests that of an automobile, with its steering wheel, foot accelerator, and spark and choke controls. Also on the instrument board are switches for a pair of headlights, and a horn button. ‘Both horn and lights are mounted on the roof of the cab. The driver sees his way through a square windshield, equipped with a wiper that keeps it clear when the vehicle is used during a snowstorm.

POWER FROM NIAGARA TO LIGHT NEW YORK
For the first time, electric power generated at Niagara Falls will help to light New York City when a superpower transmission line is completed. Permission for the erection of the last link between Hudson, N. Y., and New York City has been granted by state authorities.