Scientific American
Issue: Sep, 1952
Posted in: Ahead of its time, Computers
3 Comments on AUTOMATIC CONTROL (Sep, 1952)

This is the first in a series of 5 articles I’ve scanned from an amazing 1952 issue of Scientific American about Automatic Control. It discusses automatic machine tools, feedback loops, the role of computers in manufacturing and information theory. These are really astounding articles considering the time in which they were written, plus they have some great pictures (not this one so much, but the others).

I hope you enjoy them as much as I did. 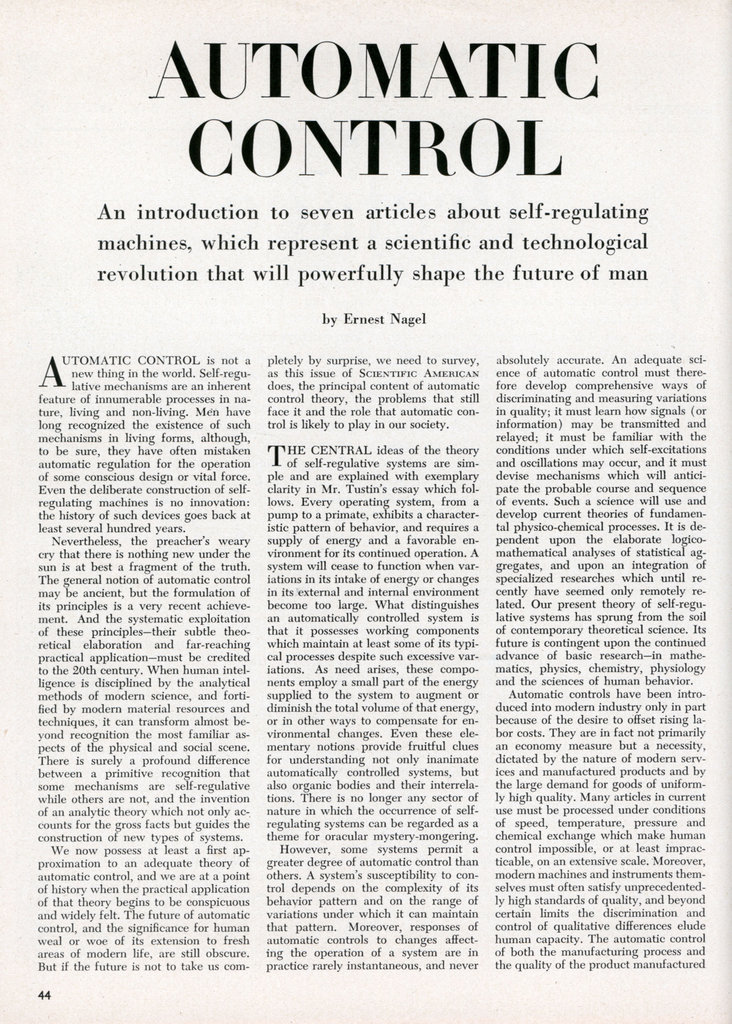 An introduction to seven articles about self-regulating machines, which represent a scientific and technological revolution that will powerfully shape the future of man

AUTOMATIC CONTROL is not a new thing in the world. Self-regulative mechanisms are an inherent feature of innumerable processes in nature, living and non-living. Men have long recognized the existence of such mechanisms in living forms, although, to be sure, they have often mistaken automatic regulation for the operation of some conscious design or vital force. Even the deliberate construction of self-regulating machines is no innovation: the history of such devices goes back at least several hundred years.

Nevertheless, the preacher’s weary cry that there is nothing new under the sun is at best a fragment of the truth. The general notion of automatic control may be ancient, but the formulation of its principles is a very recent achievement. And the systematic exploitation of these principlesâ€”their subtle theoretical elaboration and far-reaching practical applicationâ€”must be credited to the 20th century. When human intelligence is disciplined by the analytical methods of modern science, and fortified by modern material resources and techniques, it can transform almost beyond recognition the most familiar aspects of the physical and social scene. There is surely a profound difference between a primitive recognition that some mechanisms are self-regulative while others are not, and the invention of an analytic theory which not only accounts for the gross facts but guides the construction of new types of systems.

We now possess at least a first approximation to an adequate theory of automatic control, and we are at a point of history when the practical application of that theory begins to be conspicuous and widely felt. The future of automatic control, and the significance for human weal or woe of its extension to fresh areas of modern life, are still obscure. But if the future is not to take us completely by surprise, we need to survey, as this issue of Scientific American does, the principal content of automatic control theory, the problems that still face it and the role that automatic control is likely to play in our society.

THE CENTRAL ideas of the theory of self-regulative systems are simple and are explained with exemplary clarity in Mr. Tustin’s essay which follows. Every operating system, from a pump to a primate, exhibits a characteristic pattern of behavior, and requires a supply of energy and a favorable environment for its continued operation. A system will cease to function when variations in its intake of energy or changes in its external and internal environment become too large. What distinguishes an automatically controlled system is that it possesses working components which maintain at least some of its typical processes despite such excessive variations. As need arises, these components employ a small part of the energy supplied to the system to augment or diminish the total volume of that energy, or in other ways to compensate for environmental changes. Even these elementary notions provide fruitful clues for understanding not only inanimate automatically controlled systems, but also organic bodies and their interrelations. There is no longer any sector of nature in which the occurrence of self-regulating systems can be regarded as a theme for oracular mystery-mongering. However, some systems permit a greater degree of automatic control than others. A system’s susceptibility to control depends on the complexity of its behavior pattern and on the range of variations under which it can maintain that pattern. Moreover, responses of automatic controls to changes affecting the operation of a system are in practice rarely instantaneous, and never absolutely accurate. An adequate science of automatic control must therefore develop comprehensive ways of discriminating and measuring variations in quality; it must learn how signals (or information) may be transmitted and relayed; it must be familiar with the conditions under which self-excitations and oscillations may occur, and it must devise mechanisms which will anticipate the probable course and sequence of events. Such a science will use and develop current theories of fundamental physico-chemical processes. It is dependent upon the elaborate logico-mathematical analyses of statistical aggregates, and upon an integration of specialized researches which until recently have seemed only remotely related. Our present theory of self-regulative systems has sprung from the soil of contemporary theoretical science. Its future is contingent upon the continued advance of basic researchâ€”in mathematics, physics, chemistry, physiology and the sciences of human behavior.

Automatic controls have been introduced into modern industry only in part because of the desire to offset rising labor costs. They are in fact not primarily an economy measure but a necessity, dictated by the nature of modern services and manufactured products and by the large demand for goods of uniformly high quality. Many articles in current use must be processed under conditions of speed, temperature, pressure and chemical exchange which make human control impossible, or at least impracticable, on an extensive scale. Moreover, modern machines and instruments themselves must often satisfy unprecedentedly high standards of quality, and beyond certain limits the discrimination and control of qualitative differences elude human capacity. The automatic control of both the manufacturing process and the quality of the product manufactured is therefore frequently indispensable. Once the pleasures of creating and contemplating the quasi-organic unity of self-regulative systems have been learned, it is only a short step to the extension of such controls to areas where they are not mandatory. Economic considerations undoubtedly play a role in this extension, but Messrs. Brown and Campbell are probably at least partly correct in their large claim that the modern development in automatic engineering is the consequence of a point of view which finds satisfaction in unified schemes for their own sake.

HOW LIKELY is the total automatization of industry, and what are the broad implications for human welfare of present tendencies in that direction? Crystal-gazing is a natural and valuable pastime, even if the visions beheld are only infrequently accurate. Some things, at any rate, are seen more clearly and certainly than others. If it is safe to project recent trends into the future, and if fundamental research in relevant areas continues to prosper, there is every reason to believe that the self-regulation of industrial production, and even of industrial management, will steadily increase. On the other hand, in some areas automatization will never be completeâ€”either because of the relatively high cost of conversion, or because we shall never be able to dispense with human ingenuity in coping with unforeseeable changes, or finally because of certain inherent limitations in the capacity of any machine which operates according to a closed system of rules. The dream of a productive system that entirely runs itself appears to be unrealizable.

Some consequences of large-scale automatic control in current technology are already evident, and are noted by several contributors to this series of articles. Industrial productivity has increased out of proportion to the increase in capital outlay. Many products are now of finer quality than they have ever been before. Working hours have been generally reduced, and much brutalizing drudgery has been eliminated. In addition, there are signs of a new type of professional manâ€”the automatic control system engineer. There has been considerable conversion and retraining of unskilled labor. A slow refashioning of educational facilities, in content as well as in organization, in engineering schools as well as in the research divisions of universities and industries, is in progress. In the main these developments contribute to human welfare.

However, commentators on automatic control also see it as a potential source of social evil, and express fearsâ€”not altogether illegitimateâ€”concerning its ultimate effect. There is first the fear that continued expansion in this direction will be accompanied by large-scale technological unemployment, and in consequence by acute economic distress and social upheaval. As Mr. Leontief points out in his article, the possibility of disastrous technological unemployment cannot be ruled out on purely theoretical grounds; special circumstances will determine whether or not it occurs. But, as he also notes, the brief history of automatic control in the U. S. suggests that serious unemployment is not its inevitable concomitant, at least in this country. The U. S. appears to be capable of adjusting itself to a major industrial reorganization without uprooting its basic patterns of living. Large-scale technological unemployment may be a more acute danger in other countries, but the problem is not insurmountable, and measures to circumvent or to mitigate it can be taken.

There is next the fear that an automatic technology will impoverish the quality of human life, robbing it of opportunities for individual creation, for pride of workmanship and for sensitive qualitative discrimination. This fear is often associated with a condemnation of “materialism” and with a demand for a return to the “spiritual” values of earlier civilizations. All the available evidence shows, however, that great cultural achievements are attained only by societies in which at least part of the population possesses considerable worldly substance. There is a good empirical basis for the belief that automatic control, by increasing the material well-being of a greater fraction of mankind, will release fresh energies for the cultivation and flowering of human excellence. At any rate, though material abundance undoubtedly is not a sufficient condition for the appearance of great works of the human spirit, neither is material penury; the vices of poverty are surely more ignoble than those of wealth. Moreover, there is no reason why liberation from the unimaginative drudgery which has been the lot of so many men throughout the ages should curtail opportunities for creative thought and for satisfaction in work well done. For example, the history of science exhibits a steady tendency to eliminate intellectual effort in the solution of individualized problems, by developing comprehensive formulas which can resolve by rote a whole class of them. To paraphrase Alfred North Whitehead, acts of thought, like a cavalry charge in battle, should be introduced only at the critical junction of affairs. There has been no diminution in opportunities for creative scientific activity, for there are more things still to be discovered than are dreamt of in many a discouraged philosophy. And there is no ground for supposing that the course of events will be essentially different in other areas of human activity. Why should the wide adoption of automatic control and its associated quantitative methods induce a general insensitivity to qualitative distinctions? It is precisely measurement that makes evident the distinctions between qualities, and it is by measurement that man has frequently refined his discriminations and gained for them a wider acceptance. The apprehension that the growth of automatic controls will deprive us of all that gives zest and value to our lives appears in the main to be baseless.

THERE IS finally the fear that an automatic technology will encourage the concentration of political power; that authoritarian contro