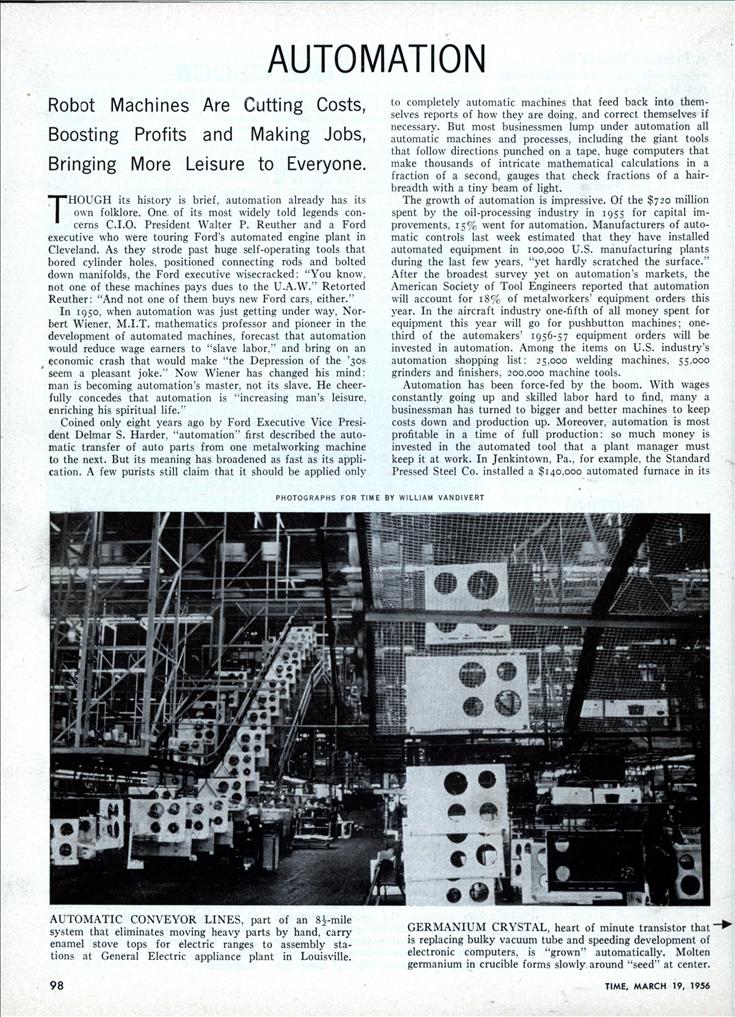 THOUGH its history is brief, automation already has its own folklore. One of its most widely told legends concerns C.I.O. President Walter P. Reuther and a Ford executive who were touring Ford’s automated engine plant in Cleveland. As they strode past huge self-operating tools that bored cylinder holes, positioned connecting rods and bolted down manifolds, the Ford executive wisecracked: “You know, not one of these machines pays dues to the U.A.W.” Retorted Reuther: “And not one of them buys new Ford cars, either.”

In 1950, when automation was just getting under way, Norbert Wiener, M.I.T. mathematics professor and pioneer in the development of automated machines, forecast that automation would reduce wage earners to “slave labor,” and bring on an economic crash that would make “the Depression of the ’30s seem a pleasant joke.” Now Wiener has changed his mind: man is becoming automation’s master, not its slave. He cheerfully concedes that automation is “increasing man’s leisure, enriching his spiritual life.”

Coined only eight years ago by Ford Executive Vice President Delmar S. Harder, “automation” first described the automatic transfer of auto parts from one metalworking machine to the next. But its meaning has broadened as fast as its application. A few purists still claim that it should be applied only to completely automatic machines that feed back into themselves reports of how they are doing, and correct themselves if necessary. But most businessmen lump under automation all automatic machines and processes, including the giant tools that follow directions punched on a tape, huge computers that make thousands of intricate mathematical calculations in a fraction of a second, gauges that check fractions of a hairbreadth with a tiny beam of light.

The growth of automation is impressive. Of the $720 million spent by the oil-processing industry in 1955 for capital improvements, 15% went for automation. Manufacturers of automatic controls last week estimated that they have installed automated equipment in 100,000 U.S. manufacturing plants during the last few years, “yet hardly scratched the surface.” After the broadest survey yet on automation’s markets, the American Society of Tool Engineers reported that automation will account for 18% of metalworkers’ equipment orders this year. In the aircraft industry one-fifth of all money spent for equipment this year will go for pushbutton machines; one-third of the automakers’ 1956-57 equipment orders will be invested in automation. Among the items on U.S. industry’s automation shopping list: 25,000 welding machines, 55,000 grinders and finishers. 200,000 machine tools.

Automation has been force-fed by the boom. With wages constantly going up and skilled labor hard to find, many a businessman has turned to bigger and better machines to keep costs down and production up. Moreover, automation is most profitable in a time of full production: so much money is invested in the automated tool that a plant manager must keep it at work. In Jenkintown, Pa., for example, the Standard Pressed Steel Co. installed a $140,000 automated furnace in its bolt factory. The furnace could be operated by one man instead of five; it boosted bolt production 133% to 2,100 lbs. hourly. But unless it kept running continuously, it was not profitable.

Barreled Benefits. The nation’s most automated industries are chemicals and oils. If it were not for automation, the U.S. motorist would pay a much higher price for gasoline than he does. While the oil industry’s average wage jumped from $1.87 hourly in 1949 to $2.47 hourly last year, automation boosted production so fast that the labor cost per barrel of finished products dropped from 28.3^ to 23.7^. Refinery workers also benefited. For example, as production at Texas’ McMurrey Refining Co. increased from $7,500,000 of high-quality motor fuels a year to $22 million, weekly paychecks rose from an average of $82 to $114. and the total payroll increased. Said President Marvin H. McMurrey: “We have never had any trouble with our union people over automation, and I think the reason is that they realize there wouldn’t be as many jobs available as there are now if we weren’t fully automated. If we went back to old hand production methods, we simply couldn’t compete, and there wouldn’t be any jobs for anyone.”

For some industries it is not cost but quality of production that brings in automation. The airfoils of supersonic aircraft and guided missiles demand such close tolerance that the human hand is often incapable of milling and finishing to exact specifications. To end one time-wasting source of human error, North American Aviation installed an automated “skin mill” to mill i^-in. aluminum slabs into F-100 wing panels with one one-thousandth-in. tolerances, found that the robot millers could make a pair of perfect wings in 23 hours v. 20 hours for a skilled machinist with a possibility of error. North American’s new skin mill has worked out so well that the Air Force has ordered 48 more for U.S. aircraft plants, will install some automated giants that can mill wing panels up to 12 ft. wide and 45 ft. long.

Fast Answers. With the marvels of the automated factory has come the automated office, manned by electronic brains that set up orders, encode instructions to lesser machines, post accounts, send out bills, write letters and clank out p:ofit and loss statements. One of the newest of the great brains is the $5,500,-000 RCA-built Bizmac, now being installed in Detroit by the Army Ordnance Tank-Automotive Command to keep track of tank and auto parts all over the world. Operators who sit at Bizmac’s console can store away on magnetic tape records of 155,000 types of spare parts, lists of vehicles that use them, detailed inventories in major depots from Japan to West Germany. If, for example, the Army needs to check world supplies of tank crankshafts, Bizmac will compile records no more than 48 hours old, bring forth the reply in three minutes, feed it out at a speed of 600 printed lines a minute. To print up a new catalogue of spare parts, Bizmac’s operator needs only to press the proper buttons, and Bizmac’s 25 electric tapewriters will clack out pages ready for offset photography. Able as it is, Bizmac is only the prototype of even better computers that will be capable of running entire factories. Tomorrow’s great brain will start up machinery, feed in raw materials, switch from one product to the next as orders come in, convey parts to assembly lines, put them together, inspect, box, band and load finished products into freight cars and trucks.

Though automation has made a striking impact on U.S. industry, the great brain and the robot machine will never make the human mind and hand obsolete. In some companies automation is not practical. One manufacturer decided to convert all the clerical work to automatic processing by means of punch card order blanks that could be fed into machines. But many of his customers ignored his punch card blanks, and the system broke down. He found that some orders were taking five days to fill by automation, so he went back to pencil and typewriters.

For reasons of labor relations many an industrialist pooh-poohs reports that automation will eliminate jobs. But unless automation eliminates jobs, it is neither profitable nor practical. Detroit Machine Maker Charles F. Hautau claims that he can cut a man off the payroll for every $5,000 a manufacturer invests in Hautau’s automation machinery. However, for every skill eliminated, others will be created and upgraded.

Oilmen are already complaining about the shortage of control panel operators for automated refineries; these technicians must be part engineer, physicist, chemist and mechanic. General Electric is training 28,000 employees for automation’s better jobs, expects the company’s average pay to rise 50% to $8,000 in ten years. Though automation will displace some workers, in the long run the U.S. economic problem will not be unemployment but how to stretch the U.S. labor force enough to keep up with a population growth of 3% yearly and a standard of living that grows much faster. With every new production climb will come new demands for shorter hours, more leisure time. Once automation hits its full stride, the 30-hour week and the three-day weekend will not be far behind.