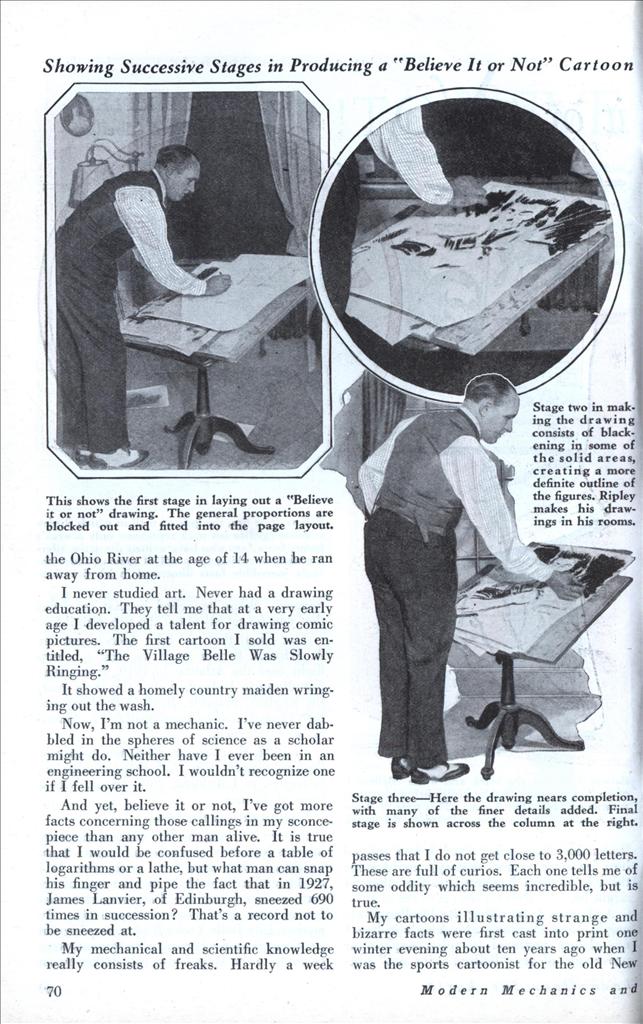 Believe it or Not!

“Rip,” famous cartoonist, tells how he makes $1,000,000 a year out of your curiosity, and how he once socked Jack Dempsey on the jaw and got away with it—Believe it or Not!

by ROBERT L. RIPLEY as told to Alfred Albelli

HAVING been called a liar more times than any other person or group of persons in the world in any epoch, I want to state a discovery of mine which created about as much excitement, in my life anyway, as the feat in question itself.

Believe it or not, Colonel Charles A. Lindbergh was the 67th man to make a non-stop flight over the Atlantic Ocean. When I published one of my “Believe it or not” drawings some time ago, depicting the Spirit of St. Louis in flight, asserting that its pilot was the 67th to attempt that adventure, I was besieged with an avalanche of protests. They crowded in by mail, telegram, telephone and “tell-another”.

My “Believe it or not” cartoons of curiosities appear in about 250 newspapers throughout the country and are digested by over 20,000,000 readers, so you can well imagine what a squawking a multitude like that could let up if I made the slightest error. There are still a lot of people who don’t believe that 2 and 2 can make 5.

Well, when I made that crack about Lindbergh, it was a hullabaloo to pay. I pride myself on the fact that I have always been able to prove myself correct.

Nearly all of the complaining customers believed that Lindy was the first to make a non-stop flight across the Atlantic. And the few who did remember that Alcock and -Brown had flown over (and I was amazed how few were in this category), couldn’t for ;the life of them imagine who the other 64 .might be.

And since I am citing the Lindbergh example, I am showing you a sample of how I am always prepared to solve, explain or prove any of my “Believe it or not” phenomena. What happened in that case was that you forgot all about the two dirigibles!

You recall that Sir John Alcock and Sir A. Whitton Brown made the first non-stop flight over the Atlantic in 1919, from Newfoundland to Ireland. Later, the same year, the English dirigible, R-34, with thirty-one men aboard, crossed from Scotland to America, and returned.

In 1924, the German ZR-3, which is now the Los Angeles, flew from Friederichshafen, Germany, to Lakehurst, New Jersey, with a crew of 33 men.

Lindbergh was the 67th.

Believe it or not, the “L” which divides my name is for Leroy. I was born in Santa Rosa, California, less than forty years ago. If I might lend a little of the weird touch of my cartoons to my own life, I might confess that I was born on Christmas Day, 1893. My mother, Lily Belle Yocka Ripley, was born in a covered wagon when my grandparents were en route to the West Coast. My father swam the Ohio River at the age of 14. when he ran away from home.

I never studied art. Never had a drawing education. They tell me that at a very early age I developed a talent for drawing comic pictures. The first cartoon I sold was entitled, “The Village Belle Was Slowly Ringing.”

It showed a homely country maiden wringing out the wash.

Now, I’m not a mechanic. I’ve never dabbled in the spheres of science as a scholar might do. Neither have I ever been in an engineering school. I wouldn’t recognize one if I fell over it.

And yet, believe it or not, I’ve got more facts concerning those callings in my sconce-piece than any other man alive. It is true that I would be confused before a table of logarithms or a lathe, but what man can snap his finger and pipe the fact that in 1927, James Lanvier, of Edinburgh, sneezed 690 times in succession? That’s a record not to be sneezed at.

My mechanical and scientific knowledge really consists of freaks. Hardly a week passes that I do not get close to 3,000 letters. These are full of curios. Each one tells me of some oddity which seems incredible, but is true.

My cartoons illustrating strange and bizarre facts were first cast into print one winter evening about ten years ago when I was the sports cartoonist for the old New York Globe. Formerly I had been on the San Francisco Chronicle, where I slaved with my inks and brushes for $22.50 and liked it.

The big boss dropped in and said he wanted something a little out of the ordinary. He was getting fed up on the general run of sports comics. I took plenty of time out to ransack my bean for an idea.

All of a sudden I remembered the feat of J. Darby, a Britisher, who had jumped backward almost thirteen feet, with weights in his hands. Nobody would have believed that at the time unless there had been an army of witnesses and a load of press stories telling the world about it.

Then I began to recall other unusual athletic achievements. They came rushing back through the gates of my memory in a steady cavalcade. I thought of R. P. Williams, who did a running high-kick of ten feet, three inches. I remembered the chap who walked across the continent backwards.

Then there was the man who hopped a hundred yards in record-breaking time. Pauliquen, the Parisian, who astounded the world by remaining under water six minutes and twenty-nine seconds.

In no time I had enough for an entire page of sport freaks. For want of a definite title, I called the collection, “Believe it or not”. Instantaneously letters began to pour in by the bushel. That’s always a sign you’re running, as we say. In time the “Believe it or not” craze spread like wildfire. To date, besides my newspaper audience, I’ve been on the radio, in the talkies and even in a television broadcast.

Back in those distant days, it would have made a good cartoon to picture a sprinter doing 100 yards in ten flat. But I’m now hoping to see the day when I can record that some errand boy has done the hundred in seven seconds. That’ll make a good “Believe it or not”.

Here are some of the most recent curiosities which I have reproduced in my cartoons: the Hindu fakir who held his hand aloft for fourteen years until birds built a nest in his palm. A Mongol Tzern rode 1,800 miles in 9 days. The dog that actually smoked. The man who yawned and broke his jaw. The Norwegian who drank 90 pints of beer at one sitting. The man who sat on eggs and hatched chickens.

Believe it or not: Daniel Webster received 8,000 votes for the presidency of the United States—after he was dead. An ostrich can run faster than a horse. A colored steward on the U. S. S. Whitney killed a chicken, picked, cleaned, cooked and ate it in four minutes. A boxer’s baby was born with a black eye. The Vivaros of Ecuador can blow darts from a blow gun 160 feet with deadly effect. And if you want to know the world’s longest cussword it’s “Himmelherrgottkreuzmilliondonnerwetter”.

Zaro Agha, the gent whom I say believes that it’s never too late to yearn, was located by me when he Reached his 153rd birthday. That was his wedding-day back in 1927. Last summer he came to Broadway and you may have seen the Turkish trophy, who left his bride behind in Constantinople, having a little innocent sport with some chorus girls.

Back from behind the Chinese Wall I have received a gracious letter recently from a Chinaman who protests that Zaro is only a kid alongside him. The venerable celestial says he has, believe it or not, documents to prove that he has just celebrated his 200th birthday. I’m going to get those two youngsters together some day and play a good old-fashioned game of marbles with them. Zaro was quite a nimble and vigorous fellow.

You should have seen the way he tossed me around on a wrestling mat.

They tell me that I am the most imitated artist in the world since I have created what is known as the “black and white” style of drawing. Since we’re in the believe-it-or-not mood, my drawings bring me a gross of $1,000,000 yearly. I have a score of secretaries and a research bureau to keep grinding out the ideas for my cartoons.

I do all my work in my home in the New York Athletic Club, which indicates that I must be some kind of an athlete. I once busted my arm trying to make Mr. John J. McGraw’s pitching battery. Another time I socked Jack Dempsey in the jaw, believe it or not, it was in fun. I’m nuts about handball. In 1926 I was so goofy over it I won the New York handball championship.