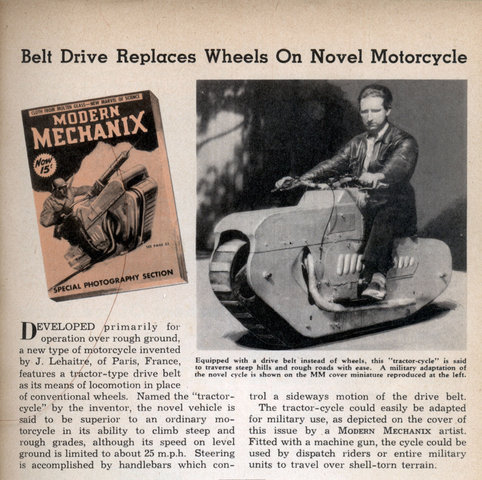 DEVELOPED primarily for operation over rough ground, a new type of motorcycle invented by J. Lehaitre, of Paris, France, features a tractor-type drive belt as its means of locomotion in place of conventional wheels. Named the “tractor-cycle” by the inventor, the novel vehicle is said to be superior to an ordinary motorcycle in its ability to climb steep and rough grades, although its speed on level ground is limited to about 25 m.p.h. Steering is accomplished by handlebars which control a sideways motion of the drive belt.

The tractor-cycle could easily be adapted for military use, as depicted on the cover of this issue by a Modern Mechanix artist. Fitted with a machine gun, the cycle could be used by dispatch riders or entire military units to travel over shell-torn terrain.