It’s really amazing how much these pictures look like the modern music visualizers in WinAmp or iTunes. 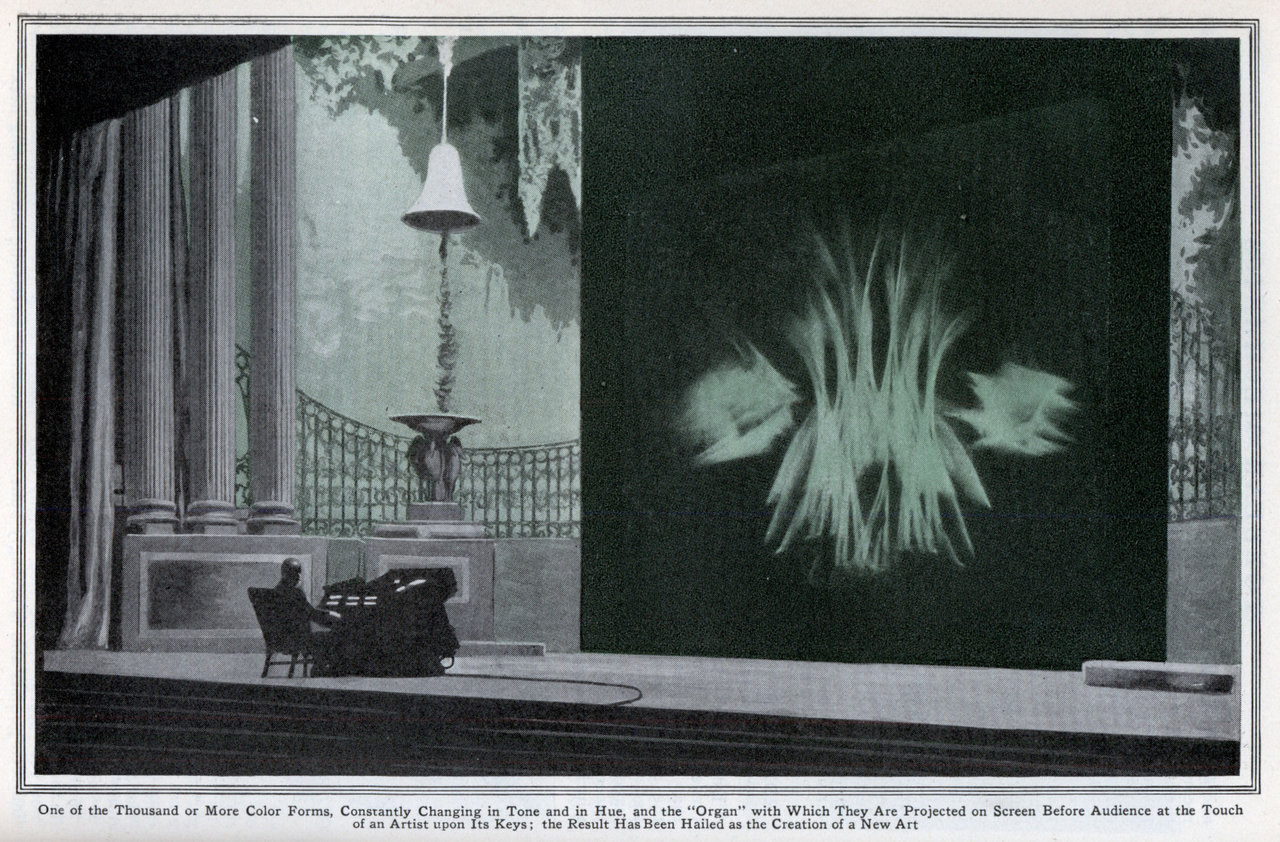 Music Is Turned Into Glowing Color

THE audience sat in hushed and wondering expectancy within the darkened theater. Without accompaniment of sound, soft color suddenly glowed upon the screen. Slowly it moved into definite form, its modulation of figures evolving in majestic sweeps. Its hue deepened and then melted radiantly into iridescent crimson, and from the restless, ever-changing shapes a slow rhythm was born. It grew and blossomed, a symphony of light, plastic and mobile. The “clavilux,” as Thomas Wilfred, the inventor, has named the organ, opens the door to a new art, the expression of moving color and form, which the artist-craftsman believes is destined to take a place as a sister of music and sculpture. It has long been the vision of dreamers; Mr. Wilfred has actualized the dream and provided the instrument that visualizes it.

The idea of the “art of light,” according to the inventor, had its inception in the mystic rites of prehistoric man. The caveman, he notes, used to weave magic spells over his tribe by flourishing firebrands in weird combinations about a campfire. And in ancient China chemicals were used to make fires of striking colors at religious ceremonies. “Sound,” he says, “was harnessed and placed at the command of a skilled player at a keyboard centuries ago.

Light has had to wait for the electrical and optical developments of the last twenty years; but the young art of light has greater possibilities than any other art form, because its medium is the greatest power in the universe, the source of all life.”

It was during his boyhood in Denmark that the inventor began experimenting with light, making rainbows on the walls with prisms pilfered from the chandelier. Later he learned to project light forms from a cigar box; and finally the finished product of his boyish experiments appeared in the steel instrument on which he now performs.

The clavilux has three manuals and a triple light chamber, corresponding respectively to the keyboard and wind chest of the pipe organ. Disk keys appear on the manual, moving to and from the operator and playing color and form almost as the pipe organ plays sound.

There are 100 positions for each key, making possible almost infinite combinations of color and form. The “music,” or notation, is printed in figures upon a five-lined staff, three staves joined, as treble and bass clefs are joined for piano, to provide a “clef” for each of the three manuals. A color chord is represented by three figures as, for example, “40-35-60”; and movement of the prescribed keys to the designated positions on the numbered scale of the keyboard produces the desired figure.

The artist sits at the keyboard with the notation book before him. He releases the light by means of switches. By playing upon the keys he projects it upon the screen, molds it into form, makes the form move and change in rhythm, introduces texture and depth, and finally injects color of perfect purity in any degree of intensity.

The light is concentrated into a beam which is projected through a form-producing device for depth and texture, then filtered through colored screens. And then in a darkened hall, through the three – dimensional projection of the “color organ,” the light pours from lenses at the back of the instrument and the flat white screen “is made a window into space where fluid light-forms are built up in fantastic compositions. The result on seeing it for the first time is the same as if music had never existed and one were suddenly to hear the strains of a violin. What would the reaction be? The listener would say: “Yes, this is nice, but of what use is it?'” the inventor declared.

“Light music is as much an art as painting, sculpture or dancing. It can be used in the theater to intensify the emotions of the actors, or to supply what music does to the movies. Light, which is the source of all life, is a wonderful medium for artistic expression. In light compositions we aim at the abstract. We have no picture of a rose or a sunset; but, instead, the glory of the sunset, the spirit of the rose. “1 confidently predict that a few years will place ‘light concerts’ beside symphony concerts, the opera and the movies. And every home will have a color organ, as every home now has a piano or a phonograph.”

“The first screen of verdant jets, warming into waving sheaves, was suggestive of the coming of spring,” says a critic in recording his reactions at a color recital; “and that was emphasized by the gorgeous colors of a tulip.

“The second composition took us into heaven with the imitation of an eagle’s soaring, and pictured the beauties that could be viewed from its eerie height, â€”a fantasy in ethereal realism. The next composition was richer and more complex.

The unique feature introduced here was the changing of the background either to harmonize or to contrast with the formative colorings that played upon it. It was suggestive of the pomp and glory of the earth’s most magnificent royal courts.

“The colors brought dreams and distant visions with them, shifting and changing constantly as the artist touches the keys.”