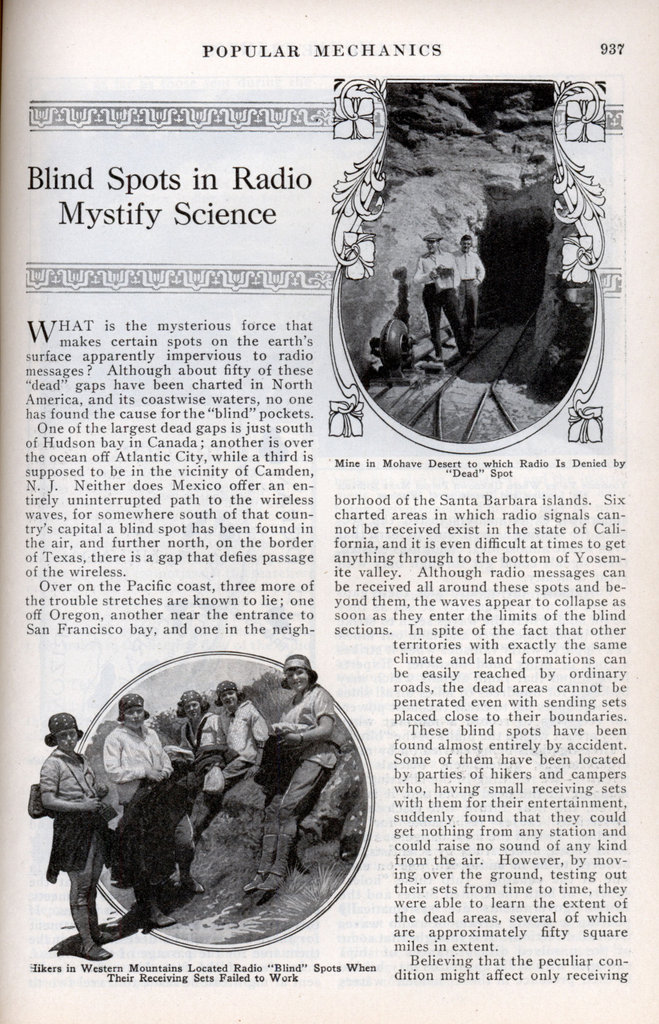 WHAT is the mysterious force that makes certain spots on the earth’s surface apparently impervious to radio messages? Although about fifty of these “dead” gaps have been charted in North America, and its coastwise waters, no one has found the cause for the “blind” pockets. One of the largest dead gaps is just south of Hudson bay in Canada; another is over the ocean off Atlantic City, while a third is supposed to be in the vicinity of Camden, N. J. Neither does Mexico offer an entirely uninterrupted path to the wireless waves, for somewhere south of that country’s capital a blind spot has been found in the air, and further north, on the border of Texas, there is a gap that defies passage of the wireless.

Over on the Pacific coast, three more of the trouble stretches are known to lie; one off Oregon, another near the entrance to San Francisco bay, and one in the neighborhood of the Santa Barbara islands. Six charted areas in which radio signals cannot be received exist in the state of California, and it is even difficult at times to get anything through to the bottom of Yosem-ite valley. Although radio messages can be received all around these spots and beyond them, the waves appear to collapse as soon as they enter the limits of the blind sections. In spite of the fact that other territories with exactly the same climate and land formations can be easily reached by ordinary roads, the dead areas cannot be penetrated even with sending sets placed close to their boundaries. These blind spots have been found almost entirely by accident. Some of them have been located by parties of hikers and campers who, having small receiving sets with them for their entertainment, suddenly found that they could get nothing from any station and could raise no sound of any kind from the air. However, by moving over the ground, testing out their sets from time to time, they were able to learn the extent of the dead areas, several of which are approximately fifty square miles in extent.

Believing that the peculiar condition might affect only receiving apparatus, experimenters tested the sections for sending as well, only to learn that even where almost ideal conditions existed, their signals could get through only with great difficulty.

Fortunately for ocean traffic these gaps do not occur as frequently at sea as they do on land, where the waves seem to strike some impassable force and fade out much as a ripple of water vanishes when it strikes a rock or other solid obstacle. Experts have found that radio signals which may be heard for hundreds of miles on all sides of these spots fail to cause the most powerful receivers to record a murmur when they are set within the limits of the “blind.”

Investigations being carried on by radio organizations, government officials and scientists-are resulting in the charting and mapping of the dead spots and, it is believed, the near future will disclose the mysterious causes responsible for the trouble. Two of the most dangerous dead areas at sea, under study by scientists, are believed to lie in mid-ocean, one on each side of the equator. Into these “holes” experts of both the United States and the British governments are systematically pouring a steady stream of radio waves from all directions. It is thought that some of the unsolved disappearances of ships equipped with radio apparatus may be due to their presence in these “hidden” waters when disaster overtook them. Of scores of theories advanced to explain the strange conditions almost all have been tested and found groundless. One not yet thoroughly tried is said to be that some form of energy in the air, not known to science, exists in these places, and when vibrating at the same rate as the radio waves it meets, causes the annihilation of both forces. If this proves true, some form of treatment for these areas will be necessary to make them free for the passage of the wireless.

In view of the fact that radio signals sent at night can be made to travel two to five times as far as those sent during the day, it is thought by some that excessive heat may be the cause of the dead spots, and tests are to be held over the territories just before dawn when temperatures are at the lowest. Mineral deposits will be sounded in mountainous districts to determine if they have any effect on the passage of the wave, for it has been pointed out that the flow of wireless passes most rapidly over plains and wide valleys. One of the most troublesome spots, however, is on the comparatively smooth floor of the desert in southeastern California, and another is over the low hills on the eastern shore of San Francisco bay.

No sooner do certain conditions appear to be true of all these dead spots, than another one is found which does not offer the same conditions of difficulty and conforms to none of those previously discovered. The radio-restricted areas all seem to have little in common, except that they will not carry the waves across the trouble gaps. Two spots in northern California are in heavily forested territory, and it has been said that such growths offer an obstacle to radio because the leaves and trunks of the large trees absorb the energy from the ether. Many radio experts do not accept this as a fact, however. For a long time it was held that failure of radio waves to “arrive” was due to slow absorption of the energy, but this has been proved untrue, hence it cannot assist the searchers in their hunt for the mysterious power that stops messages in certain districts that, to the ordinary observer, look exactly like miles of other territory that permits rapid travel to the fleeting flow of the radio.