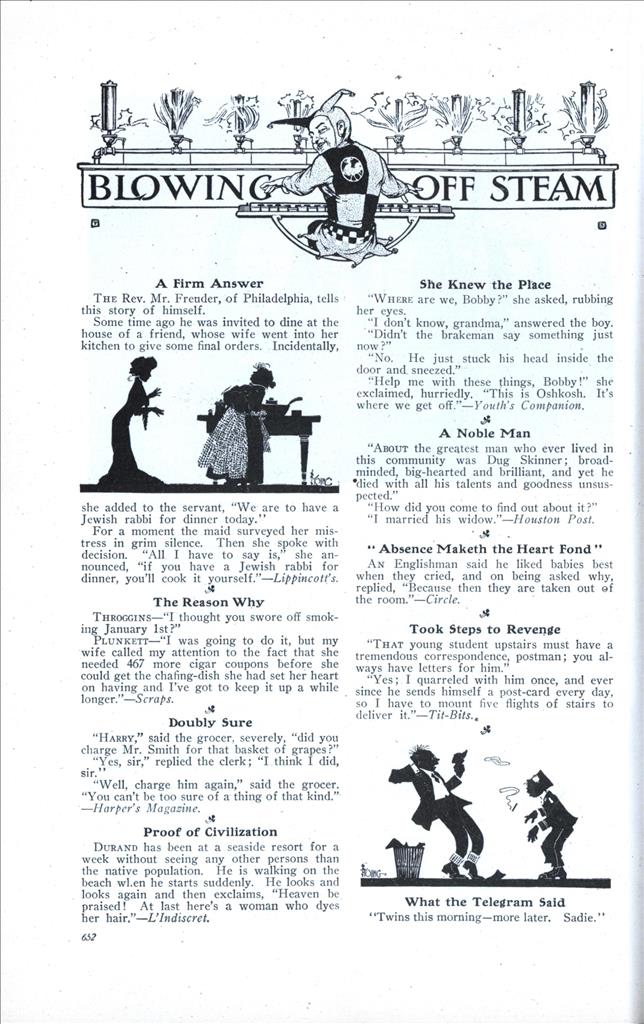 The Reason Why
Throggins—”I thought you swore off smoking January 1st?”

Plunkett—”I was going to do it, but my wife called my attention to the fact that she needed 467 more cigar coupons before she could get the chafing-dish she had set her heart on having and I’ve got to keep it up a while longer.”—Scraps.

Doubly Sure
“Harry,” said the grocer, severely, “did you charge Mr. Smith for that basket of grapes?”

“Well, charge him again,” said the grocer. “You can’t be too sure of a thing of that kind.” —Harper’s Magazine.

Proof of Civilization
Durand has been at a seaside resort for a week without seeing any other persons than the native population. He is walking on the beach when he starts suddenly. He looks and looks again and then exclaims, “Heaven be praised! At last here’s a woman who dyes her hair.”—L’Indiscret.

She Knew the Place
“Where are we, Bobby?” she asked, rubbing her eyes.

“No. He just stuck his head inside the door and. sneezed.”

“Help me with these things, Bobby!” she exclaimed, hurriedly. “This is Oshkosh. It’s where we get off.”—Youth’s Companion.

A Noble Man
“About the greatest man who ever lived in this community was Dug Skinner; broad-minded, big-hearted and brilliant, and yet he ‘died with all his talents and goodness unsuspected.”

“How did you come to find out about it?”

“Absence Maketh the Heart Fond”
An Englishman said he liked babies best when they cried, and on being asked why, replied, “Because then they are taken out of the room.”—Circle.

Took Steps to Revenge
“That young student upstairs must have a tremendous correspondence, postman; you always have letters for him.”

“Yes; I quarreled with him once, and ever since he sends himself a post-card every day, so I have to mount five flights of stairs to deliver it.”—Tit-Bits.,

What the Telegram Said
“Twins this morning—more later. Sadie.”

Sargent’s Blind Pupils
Mr. J. S. Sargent tells of an artist in Paris who had much difficulty in getting his pupils to make use of the extremely “impressionistic” ideas of art.

One evening, at a large dinner party, he asked an elderly gentleman next to him who was very short-sighted, how the gentleman at the foot of the table appeared to him.

“Ah,” exclaimed the artist enthusiastically, “how I wish my pupils could see things as you do!”—Searchlight.

Common Prudence
“Now,” said the teacher, proposing a problem, “suppose I had ten dollars and went into a store to spend it. Say I bought a hat for five dollars. Then I spent two dollars for gloves, and a dollar and fifty cents for some ,other things. How much did I have left?”

For a moment there was dead silence. Then a boy’s hand went up.

Sweet Charity
Awkward Spouse—”I see our set is to have a grand charity ball. Did you ever dance for charity?”

Pretty Wife—”Of course. Don’t you remember how I used to always dance with you when we first met?”—Illustrated Bits.

Poor Shakespeare
Manager—”Sir, your performance of Hamlet is the very worst ever presented behind the footlights. If there had been any money in the house I should have been bound in honor to return it at the doors. As it is, several friends have sent in and ordered me to remove their names from the free list.”—Punch.

The Strenuous Life
A young girl of far Albuquerque,
Aspired to be hired as a clurque;
But returned to her ma,
As soon as she sa
Like everything else, it was wurque!

The Ragged Edge
Peripatetic Peter went for two days with almost nothing to eat before he struck a farmhouse near Newark, N. J., where a reluctant housewife at last handed him out a big, square sandwich of hard ham and stale bread. A little while later a companion found him writhing in pain upon a convenient hayrick.

A Wise Parent
An Ozark County father received a note from a young man who had been “going with” his daughter recently, which read as follows: “Dear Sur: Wood like Jessie’s hand in mar-age. She and I are in luv and I think I nede a wife. Yures, Henry.” The farmer replied by letter, saying : “Friend Henry: You don’t need a wife. You need a spelling-book. Get one and study it a year. Then write me again.” —Kansas City Star.

Both, Please
“So, so. Yes, after all, I guess my little girl is grown up, and must have a mate,” said the fond father. “Tell me, frankly, young man, is it her heart or her money that you are after?”

“I already have her heart in my keeping, sir!” answered the young lover naively.— Harper’s Weekly.

Wire Papa
Muriel—”When you eloped with George, did you leave a note telling your people where you had gone?”

Gabrielle—”Why, of course. If I hadn’t, how would papa have known where to send us any money?”—Illustrated Bits.