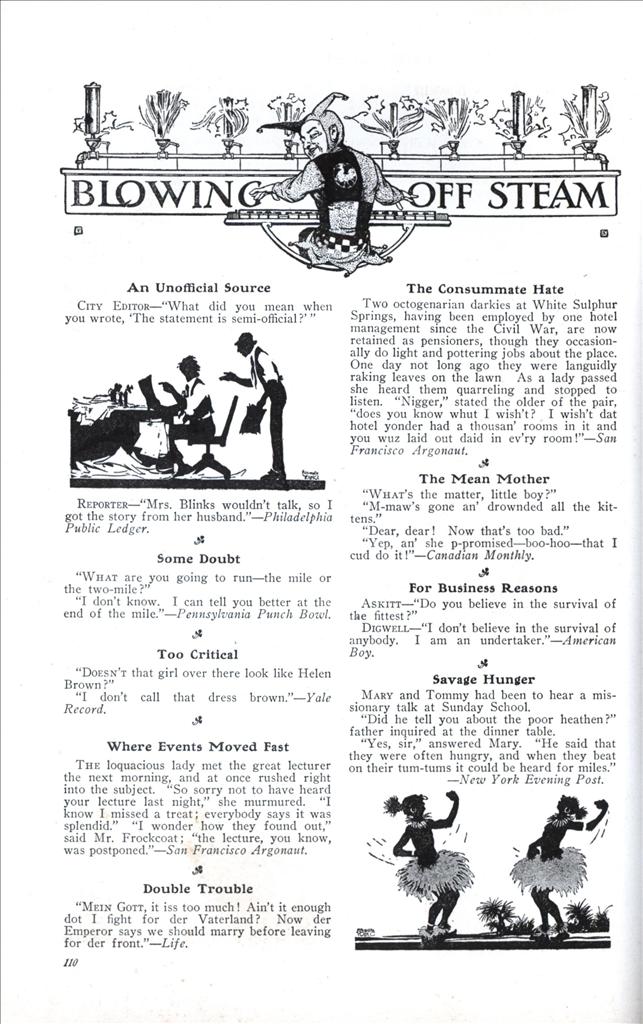 “What are you going to run—the mile or the two-mile?”
“I don’t know. I can tell you better at the end of the mile.”—Pennsylvania Punch Bowl.

“Doesn’t that girl over there look like Helen Brown ?”
“I don’t call that dress brown.”—Yale Record.

The loquacious lady met the great lecturer the next morning, and at once rushed right into the subject. “So sorry not to have heard your lecture last night,” she murmured. “I know I missed a treat; everybody says it was splendid.” “I wonder how they found out,” said Mr. Frockcoat; “the lecture, you know, was postponed.”—San Francisco Argonaut.

“Mein Gott, it iss too much! Ain’t it enough dot I fight for der Vaterland? Now der Emperor says we should marry before leaving for der front.”—Life.

Two octogenarian darkies at White Sulphur Springs, having been employed by one hotel management since the Civil War, are now retained as pensioners, though they occasionally do light and pottering jobs about the place. One day not long ago they were languidly raking leaves on the lawn As a lady passed she heard them quarreling and stopped to listen. “Nigger,” stated the older of the pair, “does you know whut I wish’t? I wish’t dat hotel yonder had a thousan’ rooms in it and you wuz laid out daid in ev’ry room!”—San Francisco Argonaut.

“What’s the matter, little boy?”
“M-maw’s gone an’ drownded all the kittens.”
“Dear, dear! Now that’s too bad.”
“Yep, an’ she p-promised—boo-hoo—that I cud do it!”—Canadian Monthly.

Mary and Tommy had been to hear a missionary talk at Sunday School.
“Did he tell you about the poor heathen?” father inquired at the dinner table.
“Yes, sir,” answered Mary. “He said that they were often hungry, and when they beat on their tum-tums it could be heard for miles.”
—New York Evening Post.

Where Is Will Wall?

The professor remained in thoughtful silence for a few minutes, then addressed his companion.
“What has become of Will Wall? Wasn’t he studying with the class last year?”
“Ah—yes; Wall—poor fellow! A fine student, but absent minded in the use of chemicals —very. That discoloration on the ceiling— notice it?”
“Yes.”
“That’s Wall.”—Today’s Magazine for Women.

The Egotism of Youth

It was commencement evening. A youth rose to deliver his oration. His subject was “Light.” He began:
” ‘In the beginning God said, Let there be light: and there was light.’ Now let us consider some of the modern improvements.”
—Canadian Monthly.

Could Fill the Bill

He had told her the age-old story, and, torn with emotion, waited for a few short words that would decide his fate.
“George,” she said, “before I give you my answer you must tell me something. Do you drink anything?”
A smile of relief lighted his handsome countenance. Was that all she wanted to know? Proudly, triumphantly he clasped her in his arms and whispered in her shell-like ear.
“Anything,” he said.—The Medicine Man.

Miss Coy—”Oh, what beautiful flowers! There’s still a little dew on them.”
His Nibs (absent-mindedly)—”I know; but I’ll pay it tomorrow.”—Judge.

Hazel—”What is that scraping noise out front?”
Dawn—”Must be the chorus girls filing off the stage.”—Williams Purple Cow.

A small, henpecked, worried-looking man was about to -take an examination for life-insurance.
“You don’t dissipate, do you?” asked the physician, as he made ready for tests. “Not a fast liver, or anything of that sort?”
The little man hesitated a moment, looked a bit frightened; then replied, in a small, piping voice: “I sometimes chew a little gum.”
—Collier’s Weekly.

A western lady attended a funeral in a church in a small town a short time ago. After the singing of a hymn which was strikingly melodious and appropriate, a male friend who was seated beside her remarked, with an air of intense local pride:
“Beautiful hymn, isn’t it? The corpse wrote it.”—Canadian Monthly.

Demosthenes was about to go down to the seashore and perform his customary stunt of talking with his mouth full of pebbles to improve his enunciation. On the way an idea assailed him.
“What’s the use of fussing with a lot of bilgy pebbles,” he growled, “when I can get the same effect out of the Galician battlefields?” And he said Suzlysmzehrgl six times in rapid succession.—Cleveland Plain Dealer.

Judge—”Have you anything to say before sentence is passed?”

Burglar—”The only thing I’m kicking about is bein’ identified by a man that kep’ his head under the bedclothes the whole time. That’s wrong.”—Philadelphia Evening Ledger.