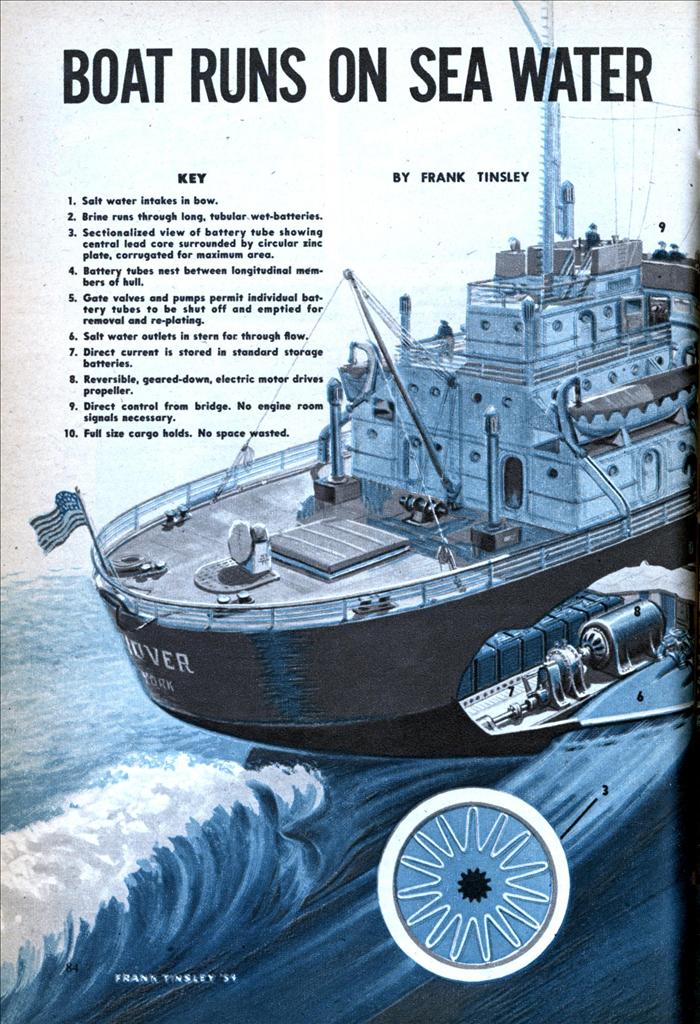 EVERY so often someone comes up with an idea so simple and apparent that millions of Monday-morning quarterbacks promptly kick themselves and mutter “Now why didn’t I think of that?” Occasionally the idea is completely original. Usually, however, it is an old chestnut that has been kicked around until some bright lad finally dopes out a way to make it work. Ralph E. McCabe, designer and patentee of a practical, new salt water battery, does not claim to be the first to conceive the notion of extracting electric current from the ocean brine. He does claim to be the first to produce a seagoing wet cell that will pull enough juice from Davy Jones’ locker to run a boat and haul a payload!

McCabe’s battery is the result of no sudden stroke of genius. Since he first latched on to the basic idea back in 1948, he has slowly and painfully developed it to its present state of efficiency. During that time no less than 36 model boats have been built and tested at various points in the Atlantic, Pacific and the Gulf of Mexico. His latest models, Mamie and the Eighth Wonder of the World, are each 21 in. long with a 4-1/2 in. beam and they weigh 2-1/2 and 3 lbs. respectively. Each produces a little over one volt and up to three amperes of current, enough to drive them through the water at speeds up to five mph. This, as any boatman can tell you, is quite impressive for a working model of that size. In addition to the propulsion motors, some of the models are fitted with electric fights, foghorns, etc., all operated from the same basic power source.

The theory behind McCabe’s power plant is simply that of the familiar wet battery. The salt water of the sea acts as a conductor of the electric current flowing between a carbon-graphite positive plate and a nickel-zinc negative plate. This current operates a D. C. electric motor which, in turn, drives the boat’s propeller. The plates are corrugated or grooved to provide increased working area without increasing their overall dimensions.

Some of McCabe’s earlier models stalled after a short run due to the polarization or “balancing” of the ions. Eventually this difficulty was overcome and his latest boats have ticked along steadily until the motor brushes or armatures became dirty—a running time of five-and-a-half hours and a distance of some 20 miles. After cleaning they promptly took off again as strong as ever. With stand-by motors and facilities for automatic changeover, there is no reason why such a power plant should not run indefinitely.

McCabe has applied his boat-battery principles to a newly patented flashlight cell which he hopes to have on the market this year. Circular in section, it embodies a grooved carbon-graphite positive rod in the center surrounded by a cylindrical, zinc negative plate, deeply corrugated for increased area. He states that this new arrangement produces twice the amperage of the present cell of similar size and lasts twice as long.

The dry cell set-up, shown in the diagrammatic insert in the lead illustration, suggests an efficient wet battery arrangement suitable for large, seagoing freight and passenger ships. Encased in long tubes stretching fore and aft between the longitudinal bottom members of the conventional double hull, the batteries „ would occupy the space now used for fuel-oil tanks. Subsurface intakes on either side of the bow admit seawater to the battery tubes in a through-flow system that exhausts it from exit vents beneath the stern. The moving water, with its constant saline content, forms a perfect electrical conductor. The current thus generated is fed into banks of storage batteries from whence it can be drawn in an even, steady supply to operate the ship’s propulsive motors and auxiliaries. Such a power plant can be controlled directly from the bridge with no engine room telegraph ‘ necessary. The D.C. motors are instantly reversible under full loads, eliminating heavy reversing gear and increasing the vessel’s maneuverability.

Assembled in short, quickly detachable sections, the battery tubes are easily accessible for cleaning, repair or replacement of worn electrodes. Individual pumps and gate valves, fore and aft, permit any particular battery to be closed off and drained without affecting the others. With a few extra units built in for reserve power, the ship can proceed at normal cruising speed while repairs are completed. At the voyage’s end, plates can be readily pulled and replaced without the necessity of dry-docking the ship.

Similar sea-water battery arrangements can be adapted to small pleasure craft. As shown in the diagram atop page 86, they can be hung in sheet form on either side of a sailing yacht’s keel or spread horizontally across the flatter bottoms of motor cruisers. While the original investment in generating and storage batteries, motors and wiring would undoubtedly equal or exceed the cost of an internal combustion engine with its exhaust pipes, plumbing, tanks, etc., the elimination of dangerous and expensive fuels, engine vibration, noise and mechanical reversing gear would make it well worth while in the long run. It would certainly be far simpler, more easily controlled, lighter and more dependable than today’s cranky power plants.

McCabe feels that while he has developed his sea-water battery to a fairly efficient stage there is still plenty of room for improvement. He hopes, therefore, that some of you MI readers will pick up the ball and carry it a few yards further, “as the amateurs did in the radio field.” With this in mind he offers a free permit to use his improvements in advanced experimentation and will be glad to discuss plans and procedures with any interested amateur. His ideas, however, are patented and can not be used commercially without specific permission.

To encourage their continued development, McCabe plans a series of sea-water-powered boat races late this summer. He explains that initial battery experiments can easily be conducted in the family bathtub if two or three per cent of salt is added to the water.

The basic idea seems perfectly valid and you may get in on the development of a brand new form of marine propulsion—free electric power from the seven salty seas! •