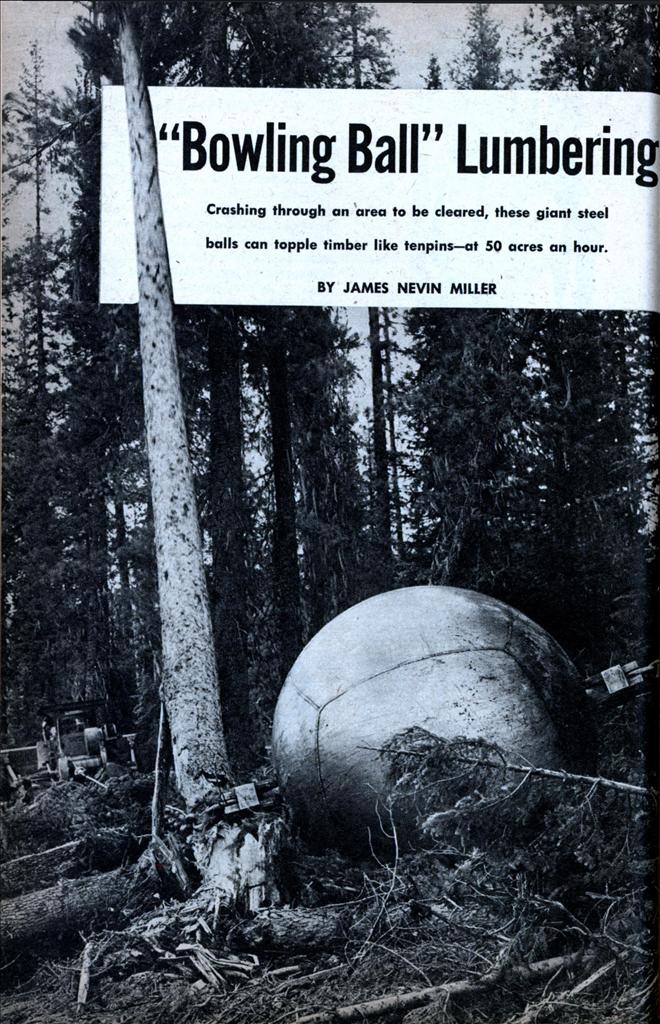 Crashing through an area to be cleared, these giant steel balls can topple timber like tenpins—at 50 acres an hour.

SCORES of times every day in an area near Hungry Horse, Montana, a man-made hurricane takes place. Hurtling through heavy timber with relentless force and a crash heard for miles, a giant steel ball, as big as a garage, snaps trees two feet thick as easily as if they were match sticks. Known as the “ball that saves millions,” this is a revolutionary method for clearing timber in record-breaking time and far cheaper on a large scale, than anything else ever known. The ball, weighing 4-1/2 tons, and measuring 8 feet in diameter, is pulled through the timber by two powerful diesel tractors traveling several hundred feet apart. Two, three and sometimes more trees are grabbed and “bitten” by a tenacious loop of cable. In a matter of seconds they are either uprooted or broken off. The ball rolls on a 6-inch shaft and in- I creases the efficiency of the snagging operation by keeping the cable approximately four feet off the ground, thereby preventing hangups on stumps and giving better leverage in pulling down trees.

The men who developed the spectacular clearing method and are using it to snag down timber on the steep mountain slopes and valley floor of the Flathead River’s south fork, are Wixson and Trisdale, commercial contractors of Redding, Calif.

Basically, the giant ball is a refinement on another new clearing method used in 1951 by the two contractors, in which pairs of diesel tractors are used to drag up to 400 feet of 2-inch wire cable through the timbered areas, snagging down all of the trees and brush caught in cable loop.

Working largely in burned over areas, the contractors ‘found the cable snagging method so efficient that they were able to complete about 95 percent of their joint contract for clearing 7,210 acres of land. However, land to be cleared under new contracts—6,840 to Wixson and 7,855 acres to Trisdale—was mostly in logged over areas. Recognizing that the cable would tend to hang up on the stumps left by the loggers, Wixson and Trisdale came up with the idea of using the 8-foot diameter steel balls to keep the cable high enough above the ground to prevent snagging on stumps.

Working on fairly level ground under ideal conditions, one pair of tractors pulling only one ball snagged down all of the trees on a heavily timbered area of nearly 200 acres in four hours. Average daily production for one pair of tractors and one ball working under varying conditions, including steep hillsides and marshy ground, has been close to 100 acres per 8-hour shift.

A contributing factor to the success of the new method has been the use of winches on the tractors. By using up to 900 feet of 1-1/4-inch cable on special winches on each tractor, the two tractor operators are able to circle a large stand of timber and reel out a total of 1,800 feet of cable as they bulldoze their way through the woods.

When the operators reach the end of the cable on their winches, they anchor the tractors against trees or stumps and start reeling the cable in on the two winches. As the cable and ball crash through the timber all of the trees caught in the loop of cable are uprooted and felled.